Welcome to my stop on the Virtual Book Tour, presented by Goddess Fish Promotions, for Shadows of the Highridge by Jay Swanson.  Please leave a comment or question for Jay to let him know you stopped by.  You may enter his tour wide giveaway, where Jay will be awarding print copies of Into the Nanten to two (2) randomly drawn commenters (US shipping only -- an e-book of Shadows
of the Highridge will be substituted to international commenter) and a print of the original artwork created for his series Into the Nanten (US only shipping) to two (2) other randomly drawn commenters, by filling out the Rafflecopter form below. You may follow all of the stops on Jay’s tour by clicking on the banner above, the more stops you visit, the better your odds of winning.

Shadows of the Highridge is your 5th published work.  Has your experience made it easier or more difficult for you to find inspiration and keep your motivation on your journey as a writer?

Oh my God you did some research. I love you.

I’d say I get lost in the mess the deeper I dive. While you can see me grow as a writer with every passing book (and even within individual works if you read stuff like Into the Nanten), what you can’t see is just how mired I feel I’ve become in everything I’ve learned. There are aspects of writing that become second nature, like ‘punctuation and speel chacking, but there are others that you have to actively pursue. Structure within the narrative and character arcs sometimes get convoluted and require more effort the more involved you get.

This depends on how good I want to look to your readers. Shakespeare, obviously, and Mark Twain. If they skipped on to the next question, growing up I loved Terry Brooks, Tolkien, Michael Crichton, and Bernard Cornwell best. I consumed their books at an absurd rate – and then I forgot how to read for a stint (I hear college does this to most of us).

My biggest cheerleader is definitely my buddy Rob, who’s about as supportive as they come on all fronts. It’s hard not to mention my Kickstarter backers though, because they’re pretty committed themselves.

Now that we are at the start of a New Year, what do you hope to accomplish both professionally and personally in 2016?

I hope to successfully Kickstart a third season of Into the Nanten, write another spinoff for that season, and get a few other books written for *REDACTED*. Personally I’d like to lose another ten pounds and run a half marathon.

You’ve lived in the U.S., France and South Africa.  Where else in the world would you like to travel and have you used any of the real life locations you’ve either lived in or visited in your books so far?

I need to get to Japan and India because I LOVE their food (you can see how I make my decisions), and Australia because I have lots of friends from there/it looks like a ton of fun. I’ve lived in something like eight countries so far and all of them have their flavors and marks to leave in my world. It’s funny how small yet staggeringly huge the Earth is. How homogenous and somehow diverse, all in one globe. My experience in Central and Sub-Saharan West Africa bleed into the Nanten quite substantially, while France and England fuel my ideas of the Old Empire (as does the Great PNW – but that’s just local pride).

The cataracts on the Congo River were the most violent waters I think I’ve ever seen – I had to put my characters through them on the Nanten River in due course. The fish in the Nanten are way worse though.

I haven’t tried my hand exclusively at Science Fiction yet, but the harder the science the more difficult it would be for me to write. Not a STEM guy here, though I like to pretend I have a clue. My favorite Fantasy writer when I was a child was probably Terry Brooks, where Michael Crichton filled that slot for Sci-Fi (he always knew how to ask the most interesting questions). As an adult I’m most inspired by the career of Sanderson, the prose of Rothfuss, and the unbridled scope of Erickson. On recent Sci-Fi, I really enjoyed the Three Body Problem for its significant cultural differences. I loved the differences it imposed on pacing and structure.

Quick Get to Know You Questions:

1..  Wine, beer or something else? Good beer (of a flavor and consistency above that of cat urine). It drives my French friends kind of crazy but I can’t help it.
2.  Cake, cookies or fancy pastry?  Can’t you have all in one? Gallet de Roi. I guess it doesn’t hit cookies so well but it is delicious.
3.  Coffee or tea?  Coffee is a new love of mine, though I’m trying to avoid growing dependent.
4.  Favorite Color?  Somewhere between seafoam and turquoise.
5.  Book you would love to see made into a movie?  Book you hope Hollywood never gets its fingers on?  The Darwin Elevator would make a really fun movie. Though it’s too late, I kind of hope they don’t make a Kingkiller series; I fear they’ll do to it what they did to the Hobbit. Same with Mistborn, actually, though I think it would make a good film; I have become utterly paranoid. 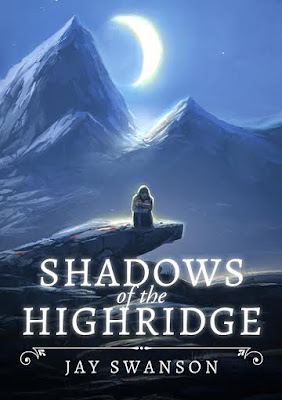 Shadows of the Highridge

Moving along the soil is the quickest way to die; for Tolly to survive she must learn to stay silent. Life on farms like hers was difficult enough in the face of plague and a decade of drought, but something worse has come to the foothills under the Highridge Mountains. Something that will destroy everything she loves.

Mere miles away, Vanig’s search for water to revive his farm is cut short when soldiers arrive bearing dark news of disaster striking farms throughout the region – and they suspect he is the root cause of it all. Those suspicions spike when a disheveled warrior appears hundreds of miles from home and takes Vanig hostage.

Death looms in the shadows of the Highridge.

“Farmer.” Gaptooth grabbed Vanig by the shoulder and turned him. “We ain’t walkin’ no farther. You do your thinkin’ on the way back.”

“Do you think I came out here to ruminate?” Vanig was shocked at how the anger boiled over, but he followed it.

“I need to make a survey of these draws.” Vanig shoved the soldier’s hand off his shoulder. It felt good. “Take measurements. Draw. No amount of thinking will move it without knowing just what I’m moving it through. You think because I live out here that I’m some stupid mystic. Sacrifice a goat and maybe this time the rain gods will bless me with abundance? Well they won’t. Gods and man have abandoned this place all the same. It’s a waste; and without someone like me to change that, that’s the way it will stay.”

Crooknose stepped forward to speak, but Vanig held up his hand.

“I need an hour. Give me that. Go drink your fill and sit down to rest. Gods know you both need it.”

“We are not,” Vanig growled. “So get your finger off my chest.”

“Don’t move. Any of you.” All three of them jumped at the sound of the voice. A new voice, one they didn’t recognize. “I mean it! Don’t move. Take one more step and you’re all dead.” Jay Swanson is the creator of Into the Nanten, the world’s first real-time fantasy blog. He is also author of a spin-off novel, Shadows of the Highridge, the standalone short novel Dark Horse, and the Vitalis Chronicles trilogy. Jay grew up in Washington State, and has lived all over the world since then. Jay served for three years with Mercy Ships, a medical charity that runs the world’s largest private hospital ship, the Africa Mercy. In each country they visit, Mercy Ships donates free surgeries to the world’s forgotten poor, alleviating the suffering that so often accompanies a lack of access to medical care. He started in IT, then worked as the editor for their international Creative Pool, and finished as the on board Media Liason.

Paris will always have a place in Jay’s heart; he lived in France for two years, but he’s currently working in the US as a consultant on electronic medical records. Basically, he lives on planes.

Jay has a background in design and video production which have been instrumental in his self-publishing endeavors. Jay was telling stories from an early age, and latched on to video as soon as he discovered he could borrow people’s cameras. The stories that would one day become the Vitalis Chronicles began to take form in Jay’s head as movie ideas while he was still in college, and he began writing them down when he realized that they might make good books as well as films (and that if he died in Africa, there would be nothing left to prove they ever existed). He started writing White Shores in May of 2010 and finished on Christmas day of that year in Applesbosch, South Africa.