Welcome to my stop on the Cover Reveal Tour, presented by Goddess Fish Promotions, for Jump Cut by Libby Fischer Hellman.  Please leave a comment or question for Libby to let her know you stopped by.  You may enter her tour wide giveaway, where Libby will award a $50 Amazon/B&N GC to one (1) randomly chosen commenter, by filling out the Rafflecopter form below.  You may follow all of the stops on the tour by clicking on the banner above.  The more stops you visit, the better your odds of winning. 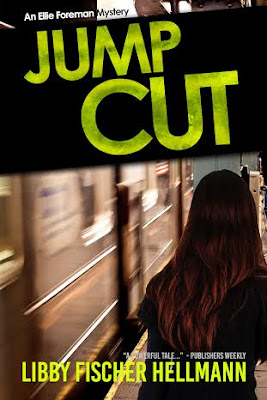 Hired to produce a candy-floss profile of Chicago-based aviation giant, Delcroft, Ellie is dismayed when company VP Charlotte Hollander, the architect of a new anti-drone system, trashes the production and cancels the project. Ellie believes Hollander was spooked by shots of a specific man in the video footage. But when Ellie arranges to meet the man to find out why, he’s killed by a subway train. In the confusion, she finds a seemingly abandoned pack of cigarettes with a flash drive inside that belonged to the now dead man.

Ellie has the drive’s contents decrypted, but before long she discovers she’s under surveillance and thrown into the middle of a situation filled with drones, hacking, and Chinese spies that put her life and those she loves in mortal danger.

The sun winked off the frozen surface of Lake Michigan the next morning as I drove south to McCormick Place. During one of the most brutal Chicago winters in decades, the smudge of purple clouds tinged with pink and gold hinted that the fury of winter might—just might—have peaked. I parked in the overpriced lot, bought half a dozen cups of overpriced coffee, and carried them into the massive exhibit hall.

The crew was setting up lights and shades, and Mac was behind the camera framing shots. MacArthur J. Kendall III owns a production studio in Northbrook. He started out shooting sweet sixteens, bar mitzvahs, and weddings, but parlayed that into corporate videos. We’ve worked together for nearly twenty years, from the days of two-inch video, to one-inch, three-quarter, and now digital.

Mac’s name, salt-and-pepper hair, button-down shirts, and penny loafers scream WASP, but the nasty scar running down his left cheek saves him from total Episcopalian infamy. He tells people he was attacked by a Mexican drug lord and made me swear never to reveal it was from a car accident.

I nodded and pulled it out of the canvas bag that doubles as my purse. We went over it. He gestured to the main area of the Delcroft booth, which featured a large projection screen with the company logo on both sides, and about twenty chairs arranged theater-style.

“What time’s the first presentation?”

Teresa Basso Gold, our client contact, had told us to be prepared for a series of short remarks by Delcroft executives touting the company’s latest innovations.

I checked my watch. Barely six thirty. “The doors don’t open until nine, and Teresa said not to expect anyone until ten. But you can get some establishing shots, if you want.”

“Sounds like a plan,” Mac said and strolled over to confer with the crew. 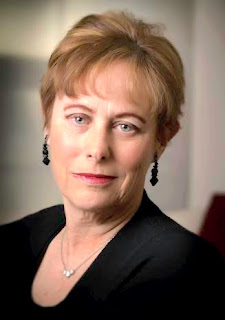 Libby Fischer Hellmann left a career in broadcast news in Washington, DC and moved to Chicago 35 years ago, where she, naturally, began to write gritty crime fiction. Twelve novels and twenty short stories later, she claims they’ll take her out of the Windy City feet first. She has been nominated for many awards in the mystery and crime writing community and has even won a few. *

With the addition of Jump Cut in 2016, her novels include the now five-volume Ellie Foreman series, which she describes as a cross between “Desperate Housewives” and “24;” the hard-boiled 4-volume Georgia Davis PI series, and three stand-alone historical thrillers that Libby calls her “Revolution Trilogy.” Her latest release, The Incidental Spy, is a historical novella set during the early years of the Manhattan Project at the U of Chicago. Her short stories have been published in a dozen anthologies, the Saturday Evening Post, and Ed Gorman’s “25 Criminally Good Short Stories” collection.

* She has been a finalist twice for the Anthony, twice for Foreword Magazines Book of the Year, the Agatha, the Shamus, the Daphne and has won the Lovey multiple times.

a Rafflecopter giveaway
Posted by Maria at Wednesday, January 06, 2016