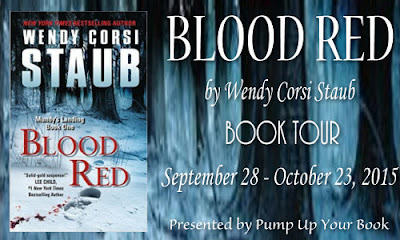 Welcome to my stop on the Virtual Tour, presented by Pump Up Your Book, for Blood Red by Wendi Corsi Staub.  Please leave a comment or question for Wendy to let her know you stopped by. 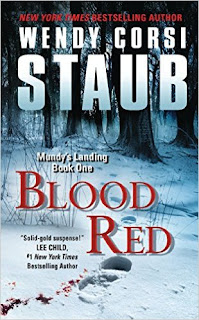 The razor's gleaming blade slices effortlessly through skin and tendon, and he relishes the final anguished moments of his prey. There's only one thing he prizes more: their long, silken strands of red hair. But these women are merely stand-ins . . . a prelude to his ultimate victim.

Nestled in New York's Hudson Valley, Mundy's Landing is famous for its picturesque setting—and for a century-old string of gruesome unsolved murders. Rowan returned to her hometown years ago, fleeing a momentary mistake that could have destroyed her family. Life is good here. Peaceful. Until an anonymous gift brings Rowan's fears to life again.

The town's violent history was just the beginning. Soon everyone in Mundy's Landing will know that the past cannot be forgotten or forgiven—not until every sin has been paid for, in blood.

ORDER INFORMATION
Blood Red is available for order at 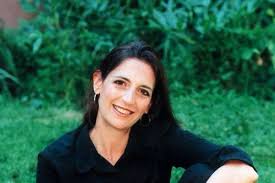 New York Times bestseller Wendy Corsi Staub is the award-winning author of more than eighty novels in a career that has spanned more than two decades. Under her own name, Wendy achieved New York Times bestselling status with her single title psychological suspense novels. Those novels and the women's fiction she writes under the pseudonym Wendy Markham have also frequently appeared on the USA Today, Amazon, Barnes & Noble, and Bookscan bestseller lists.

In Autumn 2015, Wendy will launch two new series. The first is the "Mundy's Landing" adult suspense trilogy for HarperCollins, with the launch title, Blood Red, on sale September 29, to be followed in 2016 by Blue Moon and Bone White. The other is "Lily Dale," a hardcover cozy mystery series set in the upstate New York spiritual community. Book One, Nine Lives, goes on sale October 26, with a second title to come in Summer 2016.

She has published two other suspense trilogies with HarperCollins in recent years. Nightwatcher (September 2012), won the Westchester Library Association Washington Irving Prize for Fiction. It was followed by the New York Times bestseller Sleepwalker (October 2012), which went on to become a finalist for the prestigious Simon and Schuster Mary Higgins Clark Award presented at the Mystery Writers of America Edgars Symposium, and Shadowkiller (February 2013). New York Times bestseller Live to Tell (March 2010) received a starred review in Publishers Weekly and was also a finalist at the 2011 Mystery Writers of America Edgar Awards for the Mary Higgins Clark Award. Its sequel, Scared to Death, (January 2011) was honored with the WLA Washington Irving Prize for Fiction, followed by the bestseller Hell to Pay (October 2011).

She previously published more than a dozen award-winning, bestselling adult suspense novels with Kensington Books and co-authored a Mystery series with the late former mayor of New York City, Ed Koch and a romance series with Fabio. She has ghostwritten novels for a number of other celebrities and bestselling authors.

As "Wendy Markham," her most recent title, The Best Gift, is a sequel to the acclaimed 2006 Christmas Time Travel romance, If Only in My Dreams (both from Signet). Prior, she published nearly two dozen women’s fiction novels with Hachette, Warner, Avon, Grand Central Publishing, Red Dress Ink, and Berkley. She also has an extensive Young Adult/Middle Grade backlist that includes the acclaimed series "Lily Dale" (Bloomsbury/Walker). Early in her writing career, she published in various genres including suspense, horror, historical and category romance, television and movie tie-in, and biography.

In addition to the Mary Higgins Clark Award nominations, Wendy has won the 2008 RT Award for Career Achievement in Suspense and the 2007 RWA-NYC Golden Apple Award for Lifetime Achievement. A proud recipient of the RWA Rita award, she has also been honored five times with the Westchester Library Association's Washington Irving Prize for Fiction and was recognized as one of WLA's Millennial Authors in 2000. Her Wendy Markham novel Slightly Single was named one of Waldenbooks' 100 Best Fiction titles of 2002. Her novels Slightly Suburban, The Last to Know, and Ask Me Again were nominated for RT Reviewers Choice awards, and five of her novels, Don't Scream; The Last to Know; Mike, Mike and Me;Hello, It's Me; and Bride Needs Groom, were awarded a month's top pick review by the RT BOOK club magazine.

Her work has been translated into more than a dozen languages worldwide and her titles are regularly selected as features for Mystery Guild, Literary Guild, Doubleday Book Club, Large Print Book Club, and Rhapsody Book Club.

Wendy grew up in a large, close-knit family in rural southwestern New York State and decided she wanted to become an author while in third grade. She worked in two independent bookstores during college, then moved alone to New York City at twenty-one to pursue her dream of becoming a working writer. After stints as a book editor for a Manhattan publishing house and an account coordinator for a major advertising agency, she sold her first novel, the supernatural young adult thriller Summer Lightning in 1991.

Wendy now lives in the New York City suburbs with her husband of twenty-four years and their two children. A 1986 graduate of the State University of New York at Fredonia, she proudly delivered the keynote commencement address at her alma mater in May 2008, was a featured speaker at the 2011 Academic Convocation.

Having lost her mother and mother-in-law to breast cancer, she has been a vocal and active supporter of charitable causes such as Relay for Life, Support Connection, and the American Cancer Society. In September 2012, she was an Ovarian Cancer Awareness month national spokesperson for Avon’s Kiss and Teal campaign with the Sandy Rollman Ovarian Cancer Foundation. As an animal rights advocate, she currently fosters cats and kittens for various rescue organizations in the metro New York City area.

A fan of mystery books and thrillers, I jumped at the chance to read and review Blood Red by Wendi Corsi Staub, the first book in her Mundy’s Landing series.  Using a small town setting, a series of gruesome murders that took place in the 1600’s and a recent set of killings, Ms. Staub takes us inside the mind of a killer and a woman keeping secrets.  While not quite what I was hoping for, this is a book many mystery lovers would enjoy reading.

Introducing us to Rowan Mundy, the main character of the story, Ms. Staub quickly provides a quick sketch of “Mundy’s Landing”, the gruesome crimes that are a part of the town’s history, and the person whose plans will once again put this small town in the spotlight.  While the mystery of who sent Rowan the “burnt” cookies, how it ties into her past and why she reacts the way she does is well done, I felt as if something was missing.  I felt like the story jumped between Rowan’s viewpoint and the viewpoint of “Casey”, another primary character, too much.

While there are plenty of secondary characters, only a couple of them are interesting.  I especially liked Mick, Rowan’s teenaged son and it was interesting to watch him and Rowan interact – especially since they both shared a medical condition.  I also expected a touch of violence and blood but most of that action took place off the page.  While I am not into a lot of blood and gore, perhaps a touch of it would have made the “serial killer” aspect of the book more realistic.

Will Rowan discover who is behind the threat to her safety before it is too late?  Will she be able to keep her family out of danger?  You will have to read Blood Red to find out.

*FTC Disclosure:  I received a complimentary copy of this book from the publisher for  fair and honest review as a part of a book tour, which had no influence on my opinion of the reading material provided.
Posted by Maria at Thursday, October 15, 2015