Virtual Tour for A Peach of a Pair by Kim Boykin 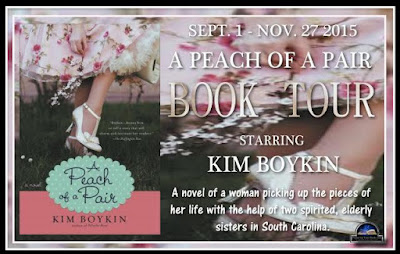 Welcome to my stop on the Virtual Tour, presented by Pump Up Your Book, for A Peach of a Pair by Kim Boykin.  Please leave a comment or question for Kim to let her know you stopped by.  My review for this book will post separately tomorrow.

AND IT ALL STARTED WITH A BUS TRIP BY KIM BOYKIN

Last year, I was having a glass of wine with my editor who wanted to know what was next for me.  I told her, I’d thought about writing a sequel to The Wisdom of Hair, but I wasn’t thrilled with the storyline that had my protagonist barefoot and pregnant when the first novel had ended when she’d just had her first child. “So, what else do you have?” my editor asked.

I wanted to wow her with another quirky tale and a great original title, so I pitched a story I’d started several years ago about two elderly spinster sisters called A Peach of a Pair. The idea for the story came from my great great aunt who traveled from the bottom of southwest Georgia to Arkansas to see a faith healer in the late 1940’s. Women didn’t travel alone, and there weren’t a lot of women on the busses. So, to be on the safe side, she rode the whole way to Little Rock with her arms crossed and a hatpin under each arm. If a man got too close to her or fell asleep and his head flopped onto her shoulder, she’d jab him with the pin. Unfortunately, when she got to her destination, she found out the faith healer had been run out of the state, and she got back on the bus and went home.

While the hatpin incident isn’t in A Peach of a Pair, the idea of traveling a great distance for healing is. I loved the idea of setting out on an arduous journey full of hope and faith that there is healing on the other end. That’s what happens to poor Lurleen, the eldest sister, who is dying of congestive heart failure, but not because she wants to go on this trip. Her sister Emily, took something from her when they were barely twenty.

As Emily says, “What happened to Teddy was Emily’s fault, and she’d paid for it a thousand times over, losing her mother to a broken heart. And the seven years Lurleen lived in the same house as Emily but didn’t speak to her, didn’t take anything from her hand. The shunning wasn’t a religious edict. Goodness no, they were raised Presbyterian. But Lurleen had taken right to the practice. Even with the gravity of events, Emily was sure it couldn’t last, but she’d been wrong.” Even fifty years later, Emily wants to right the scales so badly, she badgers poor Lurleen into getting on a Greyhound bus and riding all the way from Camden, South Carolina to Palestine, Texas to see a faith healer.

My editor loved the title, loved the story so much, I thought she would buy it on the spot, but then she said, “Where’s your young protagonist?” The truth is, when you publish you’re put into a box. All authors are because it’s easier for publishers to sell us that way. We can’t just be storytellers, which is what I wanted to be. I was so excited about my pitch to her, I’d forgotten Penguin put me in the sweet Southern box complete with a young protagonist.

So I did what every author does; I made her up on the fly. “Uh. Her name is Nettie Gilbert and she’s a ‘Bama belle in her last semester at Columbia College, and, uh, she receives an invitation to her baby sister’s wedding back home. BUT her own fiancé is the groom. So she quits school and goes to work for two old maids in Camden, South Carolina and the bus trip for healing ensues.”

The interesting thing about this is, in the original version of the story, Nettie was a young girl on the bus, but she was also a plot device to hear the sister’s stories, to understand the riff, and their complex sisterhood. When I started to write, I was a little concerned that Nettie would be overpowered by Emily and Lurleen’s great big voices, but it turned out Nettie held her own and then some, even though Emily and Lurleen do hijack the story from time to time. But the story worked and turned out to be an examination of an indestructible sisterhood and a wild ride to forgiveness. 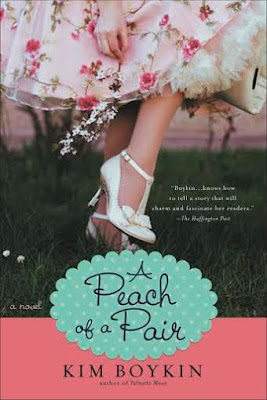 A Peach of a Pair
By Kim Boykin

"Palmetto Moon" inspired "The Huffington Post" to rave, It is always nice to discover a new talented author and Kim Boykin is quite a find. Now, she delivers a novel of a woman picking up the pieces of her life with the help of two spirited, elderly sisters in South Carolina.

April, 1953. Nettie Gilbert has cherished her time studying to be a music teacher at Columbia College in South Carolina, but as graduation approaches, she can’t wait to return to her family and her childhood sweetheart, Brooks, in Alabama. But just days before her senior recital, she gets a letter from her mama telling her that Brooks is getting married . . . to her own sister.

Devastated, Nettie drops out of school and takes a job as live-in help for two old-maid sisters, Emily and Lurleen Eldridge. Emily is fiercely protective of the ailing Lurleen, but their sisterhood has weathered many storms. And as Nettie learns more about their lives on a trip to see a faith healer halfway across the country, she’ll discover that love and forgiveness will one day lead her home.

For More Information
A Peach of a Pair is available at Amazon.
Pick up your copy at Barnes& Noble.
Also available at Indiebound.


Discuss this book at PUYB Virtual Book Club at Goodreads.

It might seem cruel to send this letter along with a proper invitation, but I couldn’t bring myself to call you, and I wasn’t given much notice regarding this matter. I also know you well enough to know you would have to see the invitation to truly believe it. Although I do regret not having enough time to have them engraved.

I’m sorry to be the one to give you the news about Brooks and Sissy. I love you, Nettie, and I love your sister. I’m not condoning her behavior or the fact that she is in the family way, but you are blood. You are sisters. No man can break that bond, not even Brooks.

There’s money and a bus ticket paper-clipped to the invitation. I’ve checked the schedules. You should be able to leave Columbia on Thursday the week of the wedding after your morning classes and get back by Sunday night. I know how you hate to miss class, and if you are also missing some wonderful end-of-the-year party, I’m sorry. So very sorry.

But the milk has been spilled, Nettie. Come home and stand up with your sister. She needs you. She’s a wreck, and it makes me worry about the baby. 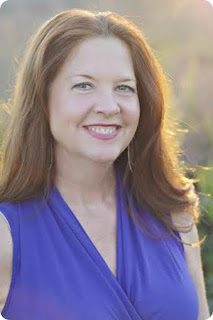 Kim Boykin was raised in her South Carolina home with two girly sisters and great parents. She had a happy, boring childhood, which sucks if you’re a writer because you have to create your own crazy. PLUS after you’re published and you’re being interviewed, it’s very appealing when the author actually lived in Crazy Town or somewhere in the general vicinity.

Almost everything she learned about writing, she learned from her grandpa, an oral storyteller, who was a master teacher of pacing and sensory detail. He held court under an old mimosa tree on the family farm, and people used to come from all around to hear him tell stories about growing up in rural Georgia and share his unique take on the world.

As a stay-at-home mom, Kim started writing, grabbing snip-its of time in the car rider line or on the bleachers at swim practice. After her kids left the nest, she started submitting her work, sold her first novel at 53, and has been writing like crazy ever since.

Thanks to the lessons she learned under that mimosa tree, her books are well reviewed and, according to RT Book Reviews, feel like they’re being told across a kitchen table. She is the author of A Peach of a Pair, Palmetto Moon and The Wisdom of Hair from Berkley/NAL/Penguin; Flirting with Forever, She’s the One, Just in Time for Christmas, Steal Me, Cowboy and Sweet Home Carolina from Tule. While her heart is always in the Lowcountry of South Carolina, she lives in Charlotte and has a heart for hairstylist, librarians, and book junkies like herself.

Her latest book is the southern women’s fiction, A Peach of a Pair.