Blurb Blitz Tour & #Giveaway for What Matters Most by Dianne Maguire

Welcome to my stop on the Blurb Blitz Tour, presented by Goddess Fish Promotions, for What Matters Most by Dianne Maguire.  Please leave a comment or question for Dianne to let her know you stopped by.  You can enter her tour wide giveaway, where Dianne will award one (1) digital copy of What Matters Most to three (3) randomly drawn commenters, by filling out the Rafflecopter form below.  You can follow all of the stops on Dianne’s tour by clicking on the banner above.  The more stops you visit, the better your chances of winning. 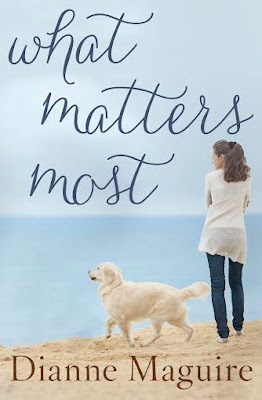 What Matters Most
By Dianne Maguire

There is good love and bad love. Good sex and bad sex. And sometimes it's hard to know the difference.

Paediatrician and mother Mia Sandhurst is scraping to keep her marriage together after her husband of 25 years breaks her heart. Finally facing reality, Mia embarks on a series of outlandish new behaviours to make startling discoveries about herself, love and life.

But the lies and betrayal Mia endures are nothing compared to those of her 15 year old patient, Rachel Hooper.

Set on the magical coast of the Fleurieu Peninsula, What Matters Most is a story of love, family, misplaced loyalty and how our choices shape who we are.

It was well after 4.00pm by the time Mia plodded down the concrete steps into the car park. The flash and beep from her car as she pointed the remote always gave her a discernible burst of joy because it meant she was on her way home. On this particular occasion she also realised she had not had time all day to think about her own family. Tossing her bag onto the passenger seat before sliding behind the wheel and turning the key in the ignition, she resolved to ring Adam after dinner. In the meantime, she thought, there was a more irksome task to be dealt with. She rummaged through her bag, dug out her phone and slipped it into the hands-free carrier. She eventually found the number and dialled, the rings at the other end echoing through the car as she emerged from the car park into the fading light.

‘Leila Anderson,’ a voice answered as Mia accelerated onto the street, still shining with evidence of the day’s persistent early-spring showers.

‘Hello, Leila, it’s Mia Sandhurst,’ she said, pulling up at the traffic lights, the indicator clicking like a metronome as she waited for a young couple with a pram to saunter across the pedestrian crossing before she could turn left.

‘Hello, Mia.’ Leila’s voice registered surprise. And there was something else that was indecipherable in her tone as well.

‘I’m really sorry to intrude on your Sunday, but Eric isn’t responding to my calls. I’m a little worried. Have you heard from him?’

A brief silence was followed by hesitant, deliberate intonations — the type of response one would expect from a witness on the stand in a courtroom, or someone giving evidence to a Royal Commission. ‘Well, no … not really. Only a few emails with attached reports and letters he wanted me to type.’

‘Has he called you?’ Mia asked, her concerns curdling to suspicion, purely due to Leila’s obvious wavering.

‘No … no calls. Look, I’m sure he’s fine, Mia. He has a pretty packed schedule this trip.’

Mia turned into her street, the energetic, almost cheerful clicking of the indictor at odds with the anxiety, edged with anger, that swirled in her gut. Of course, it was Leila’s job to protect her boss, but it was not her place to shield him from his wife. ‘Mm, that’s part of the problem, I think. I didn’t get his schedule for this trip. I wonder if you would email me a copy, please.’

There was another awkward pause before Leila said, ‘Sure. I don’t see why not. And if I do hear from Eric, I’ll have him call you.’

‘Excellent — thanks, Leila. Enjoy the rest of your day. And sorry again for disturbing you, but I feel so much better now we have spoken …

‘… not,’ Mia said through clenched teeth, stabbing the end button and accelerating into her undercroft. Within seconds, she was pounding her way up the stairs and charging through the back door into her kitchen, ignoring the beep from within her bag, which signalled the arrival of a text to pour herself a large glass of chilled white wine.

Soothed by a few velvet sips, Mia slammed her palm onto the gas fire, bringing its flames to life with a deep puff, shoved a section of pre-cooked Peking duck into the oven and made an Asian salad, then took a long hot shower. Rummaging to the back of her wardrobe she dragged out her comfort clothes — elephant-sized track pants and an equally large windcheater. She relished their sense of freedom and warmth and padded in bare feet back to the kitchen where aromas of cooked duck filled the space and teased her appetite.

It was when she was taking the first sip of her second glass of wine that she remembered the text message and lifted her phone to see that there were actually two messages awaiting her.

The first was from Maggie Malloy: Rachel’s cardiac tests clear. Still refusing to engage with psych. Will be discharged tomorrow in the am. Have reported my concerns to Child Welfare.

Mia’s brow furrowed. ‘Oh no, Rachel. What is really happening in your life? Should we be worried or should we simply leave you alone?’ She resolved to visit Rachel one last time tomorrow, before she was discharged from hospital.

The second message was from Eric: Singapore deal successful. Sorry haven’t been able to return calls. Will be home Tuesday, but have another appointment that evening so no plans pls. E. His blisteringly terse tone seemed misplaced and unwarranted, especially after days of silence. ‘How astounding, Eric, that you have chosen to message me less than one hour after I phoned your secretary. What is going on?’ she muttered, her appetite immediately leaving her. 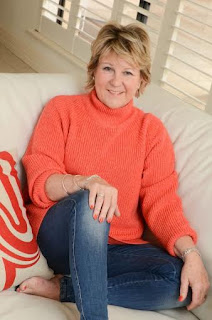 Dianne Maguire is a social worker turned novelist with over 20 years' experience in child welfare and protection.

She has won the Pauline Walsh Prize in the Eastwood/Hills Regional Annual Literary Awards and in 2010 she co-wrote a collection of non-fiction short stories, It's About Time, for children's charity Time for Kids.  Her articles have been published in state and national newspapers and magazines.

Although Dianne lives in Adelaide with her husband Jerome, she does most of her writing on the Fleurieu Peninsula. What Matters Most is her debut novel.

/
a Rafflecopter giveaway
Posted by Maria at Thursday, October 01, 2015