Welcome to my stop on the Virtual Tour, presented by Goddess Fish Promotions, for Finding Gabriel by Rachel L. Demeter.  Please leave a comment or question for Rachel to let her know you stopped by.  You can enter her tour wide giveaway, where a randomly chosen winner will be awarding a Momentum bundle of 3 romance titles chosen by the winner, by filling out the Rafflecopter form below.  You can follow all of the stops on Rachel’s tour by clicking on the banner above.  The more stops you visit, the better your odds of winning.

1. The way Ariah inspires hope inside his heart. Her inward and outward beauty thaws his hardened soul and lifts his spirit from darkness. Ariah is infinitely kind, gentle, and thoughtful—and bears a thrilling wit and easy humor.

“Oh, come now, monsieur.” A new warmth laced her voice. “You mustn’t give up on yourself so quickly and with so little fight.” Gabriel’s eyes sprang open. Ariah had scooted closer, causing the heat of her body to radiate toward him. She reached out and caressed his badge with a fingertip. His breath caught in his throat. He stiffened against the pillow and met her unwavering gaze. Tracing the insignia, she whispered, “You are a soldier. A fighter. And now you must fight. Not for the emperor, not for France . . . but for yourself.”

Gabriel swallowed, momentarily at a loss for words. Her face was mere centimeters from his own, their mouths sharing the same intakes of air. Golden curls slid across her shoulders in a fierce flurry, mirroring her inner spirit. Her hand fell from the badge, returning to the safety of her lap again. “Now may I proceed, monsieur?”
Time stood still. And in that suspended moment, Gabriel knew he could deny her nothing.


2. Ariah’s perspective of the world and her determination to move forward in spite of everything she’s endured. He admires her ability to persevere and the fortifying strength she shows in the face of adversity.

3. Ariah is selfless, morally grounded, determined to protect those she loves at all costs, and willing to sacrifice everything for her family.

4. Ariah is a survivor at heart—and she isn’t afraid to give as good as she gets.

Gabriel’s hand shot forward at lightning speed, cutting off the last of her words. His fingers latched onto her chin and curled around the pale curve. He secured her head in place, forcing her to meet his eyes. In that moment, all of her carefully erected barriers fell away, leaving her vulnerable. His grip was firm and direct, though he took care not to harm her. “Never mention that name again. Never again.”

Conflicting urges collided. Indeed, he yearned to break her pretty neck and consume her mouth with a sweltering kiss. Instead, he adjusted his grasp and gave her chin a firm shake.

Ariah bounded from the mattress. She towered above his seated form, the intensity of her stare matching his own. Her right hand rested just beneath his chin – and with it was a small dagger. He felt the blade’s jagged edge against his skin . . . felt the potency of her gaze as it penetrated his bandaged face. For several weightless moments, only her labored breathing ruptured the quiet.

She leaned over the bed, the blade held perpendicular to his throat, positioned several centimeters above his Adam’s apple. Her hand quivered, causing the metal to draw trickles of blood from his neck. He swallowed deeply as they streaked down his skin and splattered onto the mattress. Shimmering and undulating across the dark blade, dawn’s light seemed to take on a life of its own. He tensed, daring to neither move nor speak. He simply met her fevered gaze and awaited her next move.

“Do it,” he finally urged, his voice no more than a strained whisper. “Go on. Finish what I started five days ago.”

Then she blinked once, twice, three times – as if jolting back into the present. With a shaky breath, she lowered the blade from his throat, lifted her skirts, and tucked the weapon away. And without so much as another word, she fled the bedchamber.


5. Ariah is a true paradox—and a darkness lurks within her soul that echoes Gabriel’s own despair and anguish. This connects him to Ariah in a profound and meaningful way, allowing them to understand and heal each other’s internal and external scars.

There was something whimsical and undeniably tragic embedded within every line of her face. A distinct sadness – a mirage of painful memories – dimmed the charming blue of her gaze. Crescent moons shadowed her eyes, eclipsing their beauty. Her stare appeared blank and empty, as though seeing nothing. And if eyes were windows to the soul, her soul was very haunted indeed.

Within the lingering silence, a strange connection transpired between them. The sheer power of it sent tremors down Gabriel’s spine. There was no denying it; he and this woman shared a kindred spirit. And she felt it as strongly as himself.

Despite a lifetime of cool indifference, something unwanted stirred inside his chest. Perhaps she could see far more than he’d first imagined. Perhaps there was a darkness behind her pure façade that equaled his own. Only her scars were internal rather than flesh wounds … 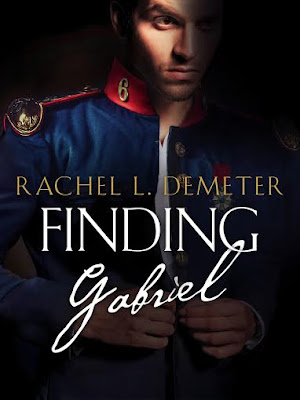 After a decade of bloodstained battlegrounds while fighting in Napoleon's army, Gabriel returns to the streets of Paris a shattered and haunted soul. Plagued by inner demons, he swallows the barrel of his flintlock pistol and pulls the trigger.

But fate has a different plan.

Ariah Larochelle is a survivor. Orphaned at twelve and victim to a devastating crime, she has learned to keep her back to walls and to trust no one. But when she finds a gravely injured soldier washed up on the River Seine, she's moved by compassion. In spite of her reservations, she rescues him from the icy water and brings him into her home.

Now scarred inside and out, Gabriel discovers a kindred spirit in Ariah – and feelings he imagined lost forever reawaken as he observes her strength in the face of adversity. But when Ariah's own lethal secrets unfold, their new love is threatened by ancient ghosts. Can Gabriel and Ariah find hope in the wreckage of their pasts – or will the cycle of history repeat again?

Perfect for fans of Gaelen Foley's Lord of Ice and Judith James's Broken Wing, Finding Gabriel features all the dark romance, searing passion, and historical intrigue of The Phantom of the Opera and Les Misérables.

It seemed that Gabriel was lost to a primitive hunger….a hunger to claim what was rightfully his. He ravished her without restriction, allowing his darker side – the side she’d fallen for nearly a month prior – to take over. He kissed her with purpose, with every grain of passion, branding her forever.

He kissed her with the intention of winning her soul. Rachel L. Demeter lives in the beautiful hills of Anaheim, California with Teddy, her goofy lowland sheepdog, and her high school sweetheart of eleven years. She enjoys writing dark, poignant romances that challenge the reader's emotions and explore the redeeming power of love.  Imagining dynamic worlds and characters has been Rachel's passion for longer than she can remember. Before learning how to read or write, she would dictate stories while her mother would record them for her. She holds a special affinity for the tortured hero and unconventional romances.

Whether crafting the protagonist or antagonist, she ensures every character is given a soul.  Rachel endeavors to defy conventions by blending elements of romance, suspense, and horror. Some themes her stories never stray too far from: forbidden romance, soul mates, the power of love to redeem, mend all wounds, and triumph over darkness.  Her dream is to move readers and leave an emotional impact through her words.

a Rafflecopter giveaway
Posted by Maria at Friday, September 18, 2015