Welcome to my stop on the Blurb Blitz, presented by Goddess Fish Promotions, for K9 Blue: Ground Zero  by Matt McCredie.  Please leave a comment or question for Matt to let him know you stopped by.  You can enter Matt’s Tour Wide Giveaway, where three (3) randomly chosen winners will each win an eCopy of his book, by filling out the Rafflecopter form below.  You can also follow all of the stops on the tour by clicking on the banner above.  The more stops you visit, the better your odds of winning. 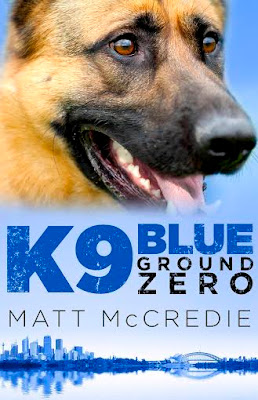 Police dog handler Mike Winters and his furry partner Falcon love a good chase. They'll do anything to protect the streets of Sydney, whether it's tracking a murderer through the woods or breaking up a bar brawl. To them, it's all fun and games until the bad guy gets hurt. And then it's just fun.

Lately though, it seems that violent incidents are on the rise. When Mike and Falcon's beloved commander is killed in action, Mike is determined to bring the perpetrators to justice, but he has no idea just how deep this malevolent plot runs.

A terrorist organisation has devised a plan to attack the city from all sides, and they have taken over a refuelling ship in Sydney Harbour. Mike and Falcon must use all of their wit and courage to battle the killers, expose police corruption, and, if they're lucky, save a city from obliteration.

Falcon had forced a hole in the cheering crowd, persuading them to move with his loudest and most intimidating bark. A few quick snaps at the slower-moving buttocks and he was through. Mike was right behind him, and looking just as menacing with his leather-and-chain lead in one hand and a long baton in the other.

‘Jesus Christ’. One brother officer was lying under pot plants in a pool of his own blood, while the other was being strangled by one of the biggest Islanders he had ever seen, who was seemingly immune to the punches and kicks of the two door men on his back. The only damage and pain they were inflicting was on themselves as their blows bounced off his muscled exterior. It took about half a second before Mike pulled himself together.

‘Dog 26, signal one! Officer down, get everyone here now!’

The radio answered, but Mike wasn’t listening. He ran forward, which was relatively easy as Falcon was working all four legs at double overtime. He had targeted the massive Samoan and was going to take him on no matter what. Mike knew what was coming and yelled out to the bouncers.

As soon as the two bouncers were clear of the action, Mike let go of the lead, releasing Falcon about five metres from his target. The Samoan looked up just in time to see a set of open jaws on a direct collision course with his face. He let go of the female cop, raising his fists in a vain attempt to punch the flying dog back to where it came from. All too late, he opened his mouth to yell. Falcon locked jaws with the Islander, driving his snout clean into the man’s mouth and clamping his jaws shut. The soft tissue inside the drunken cavity popped and tore as Falcon bit down even harder, using the strength in his powerful neck to shake the man left and right; he forced the Samoan to the ground. He couldn’t even scream in terror or pain as Falcon still filled his mouth. He moved his ham-sized hands to Falcon’s throat, not to try and force him off, but to strangle him.

Mike saw what was happening and, even though he knew Falcon could take care of himself, he took exception to this grub trying to throttle his mate. He raised his long baton up over his shoulder and swung the entire spun-aluminium shaft down as hard as he could, smashing it into the right elbow of the bulging arm. The devastating impact popped the joint, which forced his forearm down on an ugly, unnatural angle. Dislocated, it swung uselessly to his side. The blood sprayed harder from the corners of the Samoan’s mouth as he forced the deep red fluid out with his silent scream. His manic breathing forced air noisily between Falcon’s jowls and his own torn mouth.

‘Sorry, mate, just evening things up,’ Mike quipped as he saw other police wading into the crowd. They barged towards the front doors, pushing bodies aside in their frantic attempts to back up their mates.

‘I’ll take care of this idiot. You guys check on those two. And we’re going to need three ambulances.’

Mike directed the rest of the police around the scene as he leaned over Falcon and gave him his command to let go. Falcon’s broad chest and muscular front legs were splattered with a gory reminder of his emphatic victory. He stood next to Mike with his ears up and his chest stuck out with pride. His hackles were still up and massive paws firmly planted, daring anyone else to come near for the same treatment. He kept up a low, menacing growl, interrupted at intervals by a booming bark as he watched four other police officers handcuff and drag the Samoan over to a waiting ambulance. The layer of blood splattered over his chest and body only made him look crazier. Mike checked over Falcon’s body to make sure there were no injuries.

‘Jesus, mate, you really went to town on this one. Now you look like a prop from a bad horror movie.’

He took out a hose from behind the pot plants and washed the red stain away from Falcon’s black and tan fur. Satisfied with the quick rinse, he trotted him back over to their car. There was no need to yell at anyone or tell them to move. They had all seen it, and nobody wanted to take the chance of becoming the next bite bag. 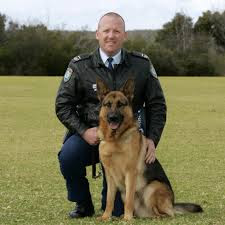 
Matt McCredie joined the New South Wales Police Force in 1992 working in Uniform and plain clothes before being accepted into the elite NSW Police Dog Squad where he spent 13 years as a dog handler. During his police service Matt was awarded two Commissioners Commendations for bravery.  He has published two non fiction titles, Blue Paws (2009) and The Real Inspector Rex (2013). Matt is an accomplished public and corporate speaker and lives in Sydney with his wife and two children.

a Rafflecopter giveaway
Posted by Maria at Thursday, September 17, 2015