Welcome to my stop on the Blurb Blitz Tour, presented by Goddess Fish Promotions, for Inviting Fire by Emily Kimelman.  Please leave a comment or question for Emily to let her know you stopped by.  You can enter her tour wide giveaway, where she will be awarding 8 separate prizes to randomly drawn winners via rafflecopter during the tour: a Sydney Rye coffee mug, a $25 Amazon or B/N GC, 2 signed paperback copies of Unleashed, 2 personalized letters from author Emily Kimelman and 2 audiobook copies of Unleashed.  You can follow the rest of her tour by clicking on the tour banner above.  The more stops you visit, the better your odds of winning. 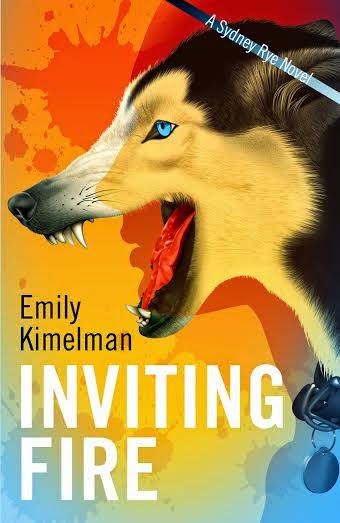 Emily Kimelman's best-selling Sydney Rye series feature a strong female protagonist and her canine best friend, Blue. It is recommended for the 18+ who enjoy some violence, don't mind dirty language, and are up for a dash of sex. Not to mention an awesome mystery with tons of action that will keep you reading late into the night!

New to Sydney Rye? The first book in the series, UNLEASHED, is FREE.

Recovering from a near fatal attack that has left her with residual trauma, including haunting dreams and flashbacks, Sydney Rye is regaining her strength at the jungle training camp of Joyful Justice, the vigilante network inspired by her now legendary acts of vengeance. However, when a routine reconnaissance mission goes horribly wrong Sydney Rye loses the trust of the leadership of Joyful Justice.

Her good friend and trainer, Merl, warns that if she wants to be in the action she’ll have to follow orders like everyone else. Never good with authority, Sydney struggles to suppress her independent streak for the greater good.

When she runs up against an old adversary, he blows apart everything she has gained. With her and Blue’s lives at stake, as well as the future of Joyful Justice, Sydney must push aside her fears and take a leadership role before it's too late.

DEATH IN THE DARK (A Sydney Rye Novella, #2)

Grabbing onto the edge of the pool he began to haul himself up. I watched his  shoulders bunch, forearms tighten, and finally his biceps and the muscles that  wrapped around from the backs of his arms came into sharp relief as his chest rose  out of the water. It streamed down, following the force of gravity, but seeming to  take the most luxurious ride down his form, before returning to the big empty pool.

I backed up giving Lenox space as his leg came up and he hopped into a standing    position, drops of water shaking off him. I felt them on my face and bare arms. He  didn't reach for a towel, just stood in front of me, the soft drizzle joining with other  lingering streams of water slipping down his body. "I'm looking forward to working  with you," he said. His gold chain rested against his neck again, short enough that  it barely brushed his collarbone, but long enough that when he was on top of me it  could fall against his lips.

I cleared my throat. "Me too," I said. Lenox smiled at me and I realized what all his  clients were really paying for: the acknowledgement and admiration he showered      so generously on you. Beyond companionship and pleasure lies the deep need to be  accepted.

I laughed. "What a rude question."

Emily Kimelman is the author of the best selling Sydney Rye Series including UNLEASHED, DEATH IN THE DARK, INSATIABLE, STRINGS OF GLASS, THE DEVIL'S BREATH and INVITING FIRE. This series feature a strong female protagonist and her canine best friend, Blue. It is recommended for the 18+ who enjoy some violence, don't mind dirty language, and are up for a dash of sex. Not to mention an awesome, rollicking good mystery!

Emily splits her time between the Hudson Valley and traveling the world with her husband and dog, Kinsey (named after Sue Grafton's Kinsey Milhone), researching exciting locations for the Sydney Rye Series. You can follow along on their adventures through Instagram, Facebook, and on Emily's blog.

The first book in the Sydney Rye series, UNLEASHED, is available as a free download on all major ebook retailers.

If you've read Emily's work, and enjoyed it, please let her know. You can reach Emily via email ejkimelman@gmail.com, on Twitter @ejkimelman, on Facebook and on her website www.emilykimelman.com

a Rafflecopter giveaway
Posted by Maria at Wednesday, December 17, 2014