Welcome to my stop on the Blog Tour, presented by Bewitching Book Tours, for Computer Love Inc, II: Gestation by Kurt and Jessica Hansen.  Please leave a comment or question for Kurt or Jessica to let them know you stopped by.  You can enter their tour wide giveaway, for one (1)  of two (2) $25 Amazon gift cards, or one (1) of 3 signed paperback copies of Computer Love Inc. II: Gestation, by filling out the Rafflecopter form below.  You can also follow the rest of the tour by clicking on the banner above.  The more stops you visit, the better your odds of winning.

The Story Behind the Story As Told by Jessica Hansen

One of the most exciting things for me to share as an author is the fact that the idea behind the Computer Love Inc. series was born before I even was. My father and co-author, Kurt Hansen, had the idea for a song back in the 1980s, which he penned on a small sheet of paper at home, then finished it up while at work. (He’s always been a passionate lyricist and musician - this type of behavior isn’t uncommon for him.) I’d be hard-pressed to guess what his intentions were with that set of lyrics all those years ago, but I’d bet that he had no clue that it would turn into a science fiction trilogy.

The song lyrics can actually be found within the first volume of the series, Computer Love Inc. He also has a youtube video, which you can access here: https://www.youtube.com/watch?v=dVE5t_xFjIc&feature=youtube_gdata.

The concept is really quite fun, and for having been written over two decades ago, it was very forward-thinking for its time. The song was written as an advertisement for a company, “Computer Love,” that sells companionship in the form of a robotic, nonliving person. Of course, we’re storytellers, and a song, just under three minutes, didn’t seem like enough time to fully explore this concept.

Kurt wanted to expand the song into a rock opera, and began developing more detailed ideas about ten years ago. As I grew to love writing more and furthered my education, the concept of writing a book grew very interesting to me - and my dad already had the perfect starting point. It wasn’t until I was in college studying to become an English major that I picked up his work and decided to play around with it.

My intention was never to compile a full-length novel, but somehow, our collaborative efforts got us there. Even after I handed him a completed draft of Computer Love Inc. for his birthday, I still never envisioned that we’d be holding a paperback copy, or that it would be available for download as an ebook. And then, of course, came the sequel, Computer Love Inc. II: Gestation. John, Zak, and Marius simply had to get themselves into more trouble.

The thing we get asked about most often as co-authors is our creative process. We always hear, “How can two minds create one finished story?” For us, it’s simple. Kurt drafts an outline with lots of creative ideas, and I take a look at it, developing it and organizing it to create focus and flow. If there’s something I don’t understand or needs reworking, we simply discuss those areas. Based on his framework, I inject detail and enhance the verbiage, so that together we create a full-bodied story.

Recently, though, I’ve been finding that more and more often, the characters are running away with themselves, telling a story all on their own. Together, we’ve developed these characters that have so much life in them, it’s often a matter of trying to hone in on their energies to see where the story can take them.

In reality, the writing process often goes smoother for the two of us than you might think. It’s the revision process that tends to drive us a bit crazy. Luckily, we have awesome beta-readers who can help to weigh in on any issues we may face. Also, we have this motto that tends to work quite well: Write with the help of a little alcohol, and then edit stone-cold sober. We think Hemingway would approve. 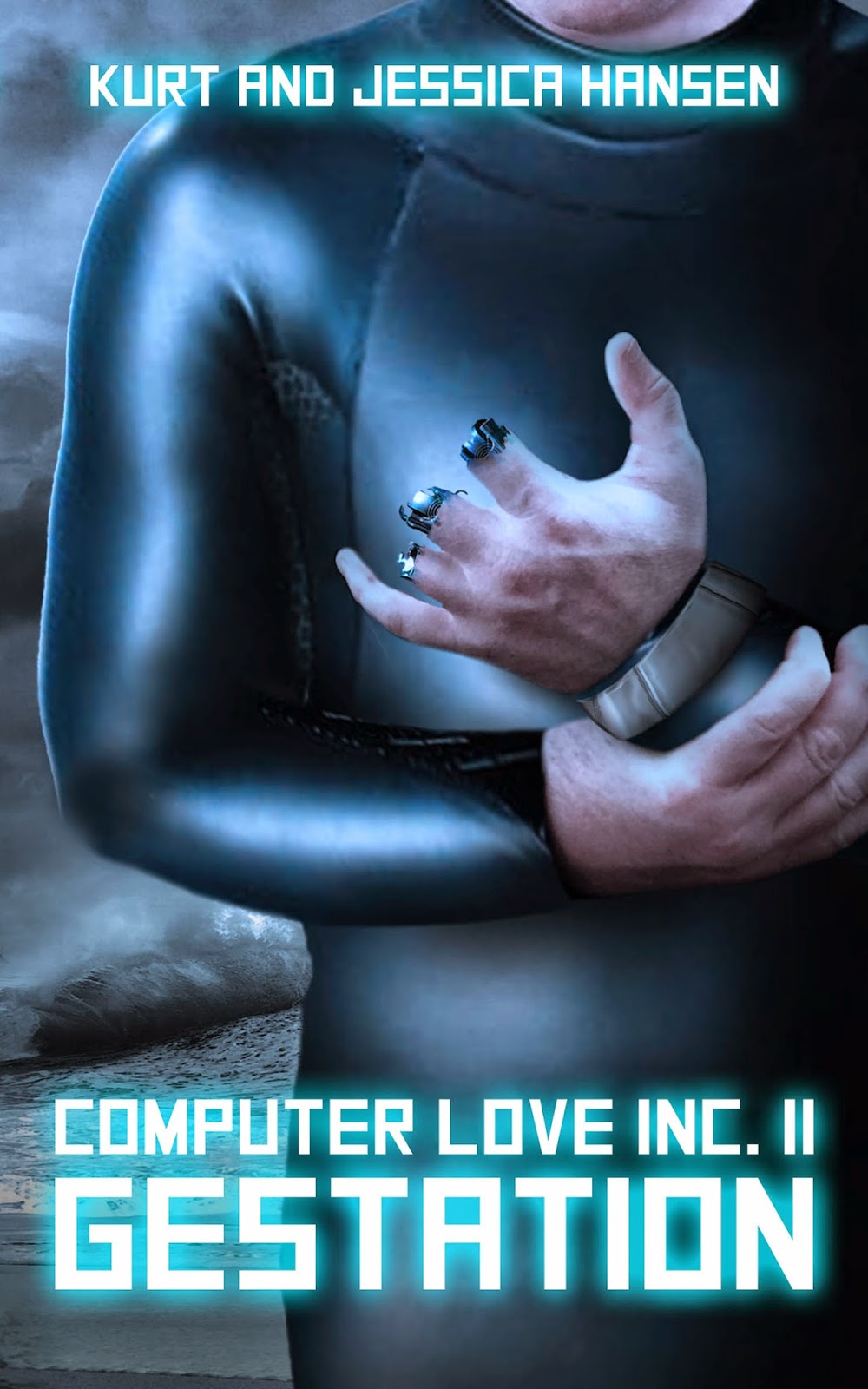 After the sudden deaths of two previous Computer Love Inc. CEOs, Marius takes control of the company. Embracing the talents of his godson, John, and his best friend, Zak, he hires the boys to oversee the Companion Services Division.

Marius refines his breakthrough technology, the Brain Machine Download, and as a result, creates his double, M2, as the prototype. Together, they ignite the future of Computer Love Inc. by acquiring an elite team of scientists to expand the company’s technological boundaries. Meanwhile, Marius struggles with the government’s demands for a clandestine initiative - the Secret Service Companion.

Between the looming government presence and the overwhelming force behind his new team of inventors, can Marius survive the outcome of his own creations?

Available at Amazon and BN

The room remained silent.  Ten pairs of eyes were fixed on Marius, not even a single person consumed with a hangnail or discreetly checking messages on his or her unit.

“So then – and please forgive me when I say this, because often it seems that social delicacies elude me; I’m sure you all possess unique and likeable personalities, but really – it’s your brains that we’re after here.”

Again Marius paused.  By now, some gazes had shifted: faces looked amongst one another, gauging reactions – animals measuring a threat by observing the rest of the pack.

“Have you ever heard someone say, ‘Can I pick your brain?",
Essentially, that’s what I’d like to do here.  I need your brilliance, and I implore you to consider this proposal.  I would like to perform a Brain Machine Download on each of you in order to capture your intelligence.  Is everyone familiar with what the theory of the BMD is, or what it entails?”

If they were not familiar, no one spoke up or raised a hand.  Again, the looks flashed around the room – there were a few who wanted to know more, but, seeing that no one else had first spoken up, they remained quiet.  Marius had seen it.  Even in the wisest, cowardice lives… 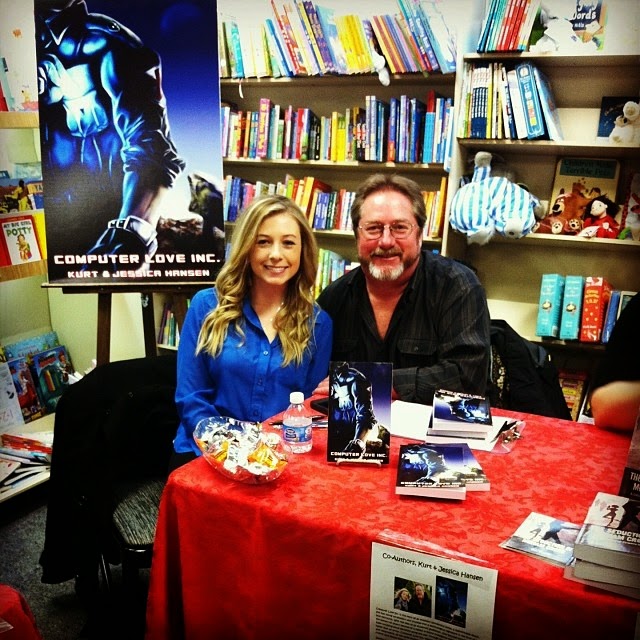 Kurt and Jessica Hansen reside in northern New Jersey . Kurt has worked in the aerospace electronics industry for over three decades and enjoys the outdoors, writing, and composing music. Kurt is easily recognized with a guitar in his lap, a pencil in his mouth, and a piece of paper in front of him.

a Rafflecopter giveaway
Posted by Maria at Monday, December 22, 2014