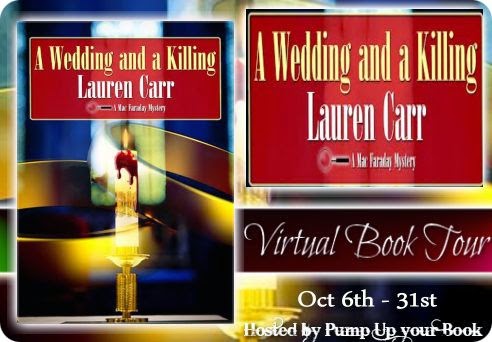 Welcome to my stop on the Virtual Book Tour, presented by Pump Up Your Book, for A Wedding and A Killing by Lauren Carr.  Please leave a comment or question for Lauren to let her know you stopped by.  You can follow the rest of Lauren’s tour here. 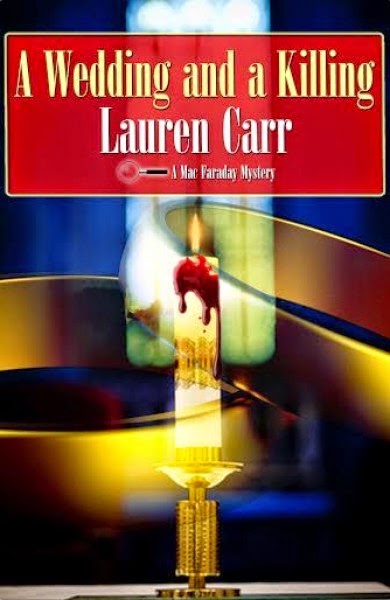 A Wedding and a Killing
by Lauren Carr
Mac Faraday Mystery, Book 8

When Mac Faraday decides to do something, there’s no stopping him … even murder!
Not wanting to wait until their big day to start their life of wedded bliss, Mac Faraday and his lady love, Archie Monday, decide to elope to the little church where his ancestors had all married—along the tranquil shore of Deep Creek Lake.

However, before they can say, “I do,” the sanctuary erupts into chaos when Gnarly finds a dead body in the church office.

As they dive into the investigation, Mac and his team discover more questions than answers. What kind of person walks into a church and shoots a man for no apparent reason? How do you solve the murder of a man who has no enemies in the world? Which of the seemingly kind-hearted church members is really a cold-blooded killer?
Then, there is the all-important question, how long do Mac Faraday and his lady love have to wait to get married?

For More Information
A Wedding and a Killing is available at Amazon.
Discuss this book at PUYB Virtual Book Club at Goodreads. 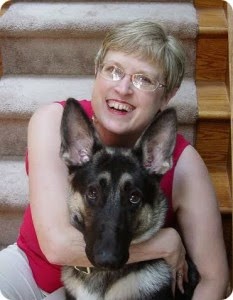 Lauren Carr is the best-selling author of the Mac Faraday Mysteries, which takes place in Deep Creek Lake, Maryland. A Wedding and a Killing is the eighth installment in the Mac Faraday Mystery series.
In addition to her series set on Deep Creek Lake, Lauren Carr has also written the Lovers in Crime Mysteries, which features prosecutor Joshua Thornton with homicide detective Cameron Gates, who were introduced in Shades of Murder, the third book in the Mac Faraday Mysteries. They also make an appearance in The Lady Who Cried Murder.Dead on Ice (A Lovers in Crime Mystery) was released September 2012. The second installment,Real Murder was released to rave reviews in June 2014.

Lauren is a popular speaker who has made appearances at schools, youth groups, and on author panels at conventions. She also passes on what she has learned in her years of writing and publishing by conducting workshops and teaching in community education classes.

She lives with her husband, son, and three dogs on a mountain in Harpers Ferry, WV.

A secret elopement, a dead church trustee and a dog named Gnarly take center stage in Lauren Carr’s A Wedding and A Killing, the eighth book in the Mac Faraday Mystery series.  While a part of a series, this book can be read and enjoyed on its own as Ms. Carr does a good job introducing the colorful characters and providing some background.  A well-paced plot with a light touch of humor, good dialogue and a lovely setting by a lake, A Wedding and A Killing is a book mystery lovers will enjoy.

Agreeing on a secret elopement, with a formal ceremony to take place six months later, former detective Mac Faraday and fiancée Archie Monday head to a local church where best friends David O’Callaghan and Chelsea Adams will serve as witnesses.  Only once they arrive at the church, nothing goes exactly as planned.  Between Gnarly’s behavior (Mac’s German Shepard) and the body of a church trustee found shot in an office, what was supposed to be a joyous occasion turns into a full scale homicide investigation.

Ms. Carr does a good job developing Mac’s character from the start.  While new to this series, I was able to learn about Mac’s past (retired homicide detective), how he ended up in Spencer, Maryland (inheriting his birth mother’s 270 million dollar estate) and his ongoing relationships with the secondary characters (from half-brothers to current fiancée).  Ms. Carr also did a good job developing the mystery – after all it’s not every day a church trustee gets shot between the eyes at close range while counting the offering at church!

I found the pace of the story easy to follow with plenty of emotional angst, good dialogue and even some light humor.  I also enjoyed watching the romance between Mac and Archie as they try to figure out how to balance their own desires against what Archie’s family wants for the only girl in a family full of boys. The remaining secondary characters, from David’s police officers to all of the possible suspects, were also well developed and I found myself trying to solve the mystery of who committed what crime (there turned out to be more than one).  I found the behavior of the church members to be interesting and probably closer to the truth than many of us would want to admit.

Will Mac be able to solve the mystery of who killed the church trustee before another church member finds themselves in the line of fire?  Will Mac and Archie’s delayed elopement put a crimp in their relationship and cause them to change their plans? You’ll have to read A Wedding and A Killing to find out.  I enjoyed it and look forward to reading more of the books in this series.

FTC Disclosure:  I received a complimentary copy of this book as a part of a book tour for a fair and honest review.  I did not receive any additional payment for my opinion of the reading material provided.
Posted by Maria at Friday, October 31, 2014