Welcome to my stop on the Super Book Blast, presented by Goddess Fish Promotions, for One Shingle To Hang by DeAnn Smallwood.  Please leave a comment or question for DeAnn to let her know you stopped by.  You can enter DeAnn’s giveaway, for a $25 Barnes and Noble Gift Card, by filling out the Rafflecopter form below.  You must comment in order to enter the giveaway.  You can follow the rest of the stops for DeAnn’s tour by clicking on the banner above. 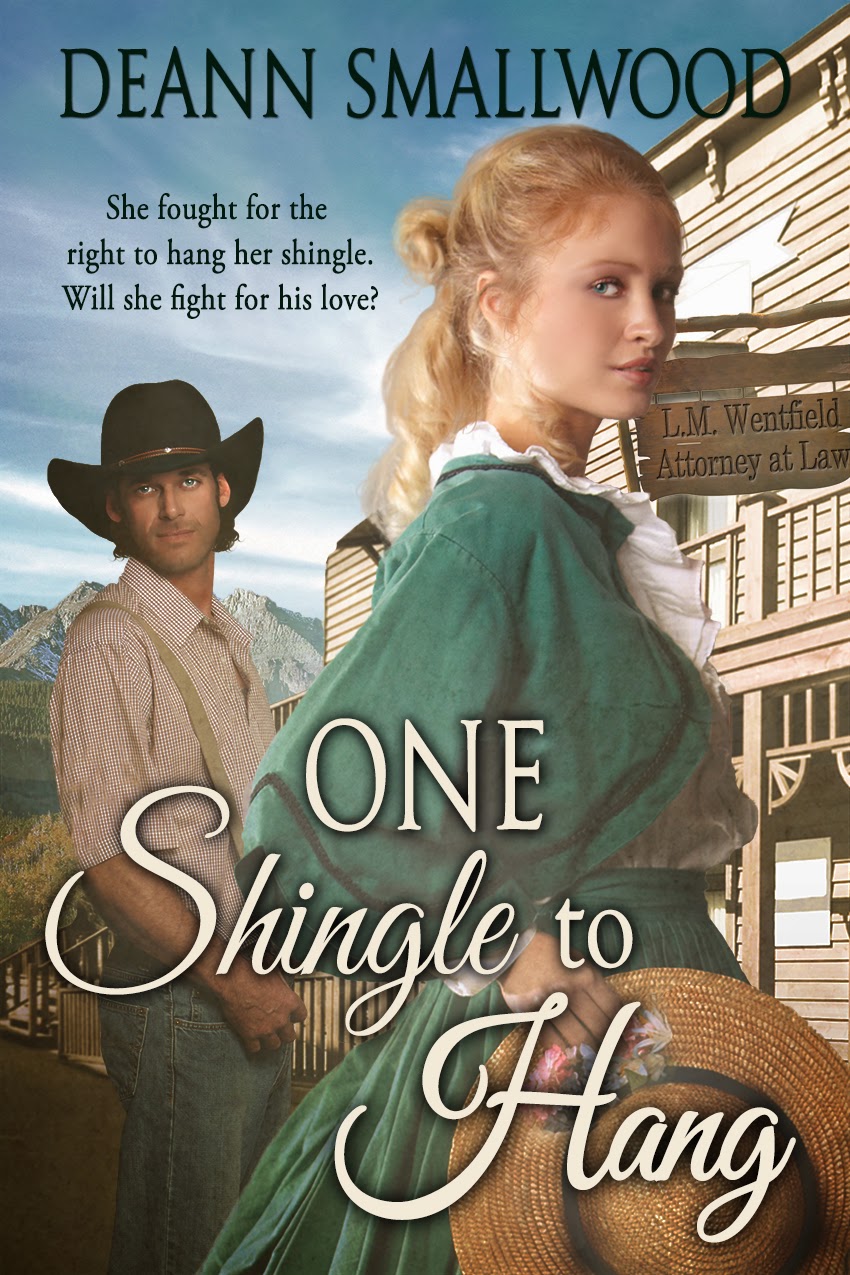 One Shingle To Hang
By DeAnn Smallwood

Everyone knew Lil Wentfield would never marry. What man would want her? Granted she was a real beauty.

A woman with too much knowledge was at risk for insanity. Their fragile mind couldn’t handle it. That’s what Lil had been told when she went against convention and became an attorney. The 1800’s had fewer women lawyers than women doctors. Her pride knew no bounds when she hung her shingle—L.M. Wentfield, Attorney At Law.

Drew was a struggling cattle rancher, building a fledging Hereford empire. He was working toward that goal when he was accused of rustling and faced possible hanging. He needed a lawyer—a good one—a man. Chesterfield had one lawyer—a new one—L.M. Wentfield. He wasn’t prepared for a beautiful blonde with a sharp tongue and fiercely won independence.

Lil had no homemaking abilities. Her love was the law. And if the thoughts of the gray-eyed cowboy, who had the audacity to refuse her legal help stayed in her mind, she’d push them aside. She had nothing to offer a rancher . Even her wealth wouldn’t be considered an asset to a prideful man. And Drew Jackson was proud.  So proud, he knew he couldn’t ask a woman of Lil’s stature to share his life—but he wanted to—from the moment he’d stolen that first kiss.


A loud knock broke into her thoughts. “Come in,” she called out.
Nothing happened, then another knock. “Please, come in,” she called again.
Getting no response, Lil came around her desk and, with some irritation at the interruption, jerked open the door, nearly toppling the tall man who held the doorknob on the other side. He muttered something under his breath, and tried to regain his balance only to bump into Lil, throwing her off stride. She stumbled backwards and would have fallen if not for the man’s quick reaction. He grabbed Lil and, wrapping both arms around, pulled her to him. Then, in a parody of the two-step, he danced her to safety.
Lil felt herself falling, then rescued by two strong arms. Not only was she pulled up short, but she was wrapped tightly against a rock hard chest, her nose buried in the man’s damp shirt. A very pleasant smell greeted her nose. The scent of summer rain and witch hazel. She found the masculine odor intoxicating.
Neither moved. Then Lil raised her head and looked into a pair of dancing gray eyes. His arms never relaxed their grip; in fact, they seemed to tighten around her as his mouth twitched, then broke into a smile.
“Didn’t expect to end up with a beautiful woman in my arms. For a moment there, I expected to land on the rug, Ma’am. With you alongside me,” he added with a chuckle.
He loosened his grip and gently pushed her away from the warmth and safety of his chest. Lil stepped back, feeling as though she’d just had something precious taken from her. She realized her hands still gripped his arms. Like a hot potato, she dropped them and turned away from the man’s disturbing presence. Like a fox heading for her den, Lil scurried behind her desk and gratefully lowered her trembling body onto the waiting chair.
With the desk between them, she was once again in charge. “May I help you?” she asked coolly, hoping the tremble in her voice went unnoticed. “I called come in not once but twice.”
“Sorry, Ma’am. Guess I didn’t hear you. I was just fixing to open the door when you did just that. Are you okay?”
“Yes.” Lil answered with no desire to elaborate. “I—I appreciate you catching me. Now,” she hurried away from that topic, “to repeat myself, how may I help you?”
He smiled, as if knowing her thoughts. Walking over to the desk, he removed his hat and stood with it in his hands. “I apologize for dripping on your floor, but it’s raining like hel—, uh, like heck out there.”
Lil tried not to look at how the ends of his eyes crinkled when he smiled. She focused instead on his hair, black and shiny with rain drops glistening on the wavy strands not covered by his hat. She didn’t realize she was staring at him until he shifted from foot to foot.
“Ma’am?”
“Yes,” Lil answered, pulling herself back to reality.
“What I’m here for is to see L.M. Wentfield, Attorney At Law.” He pointed at the window, in the direction of the sign.
Lil nodded. “Yes,” she said again. At this rate, he’d think she only had a one word vocabulary.
The man tilted his head to one side. “Could you direct me to L. M. Wentfield, Ma’am?”
“Of course I can. How may I help you?”
Two small furrows appeared between the man’s eyes. He peered closer at her. Perhaps he needed to try another approach.
“Ma’am, could I speak with your husband?”
“There is no husband,” Lil said with a hint of asperity. 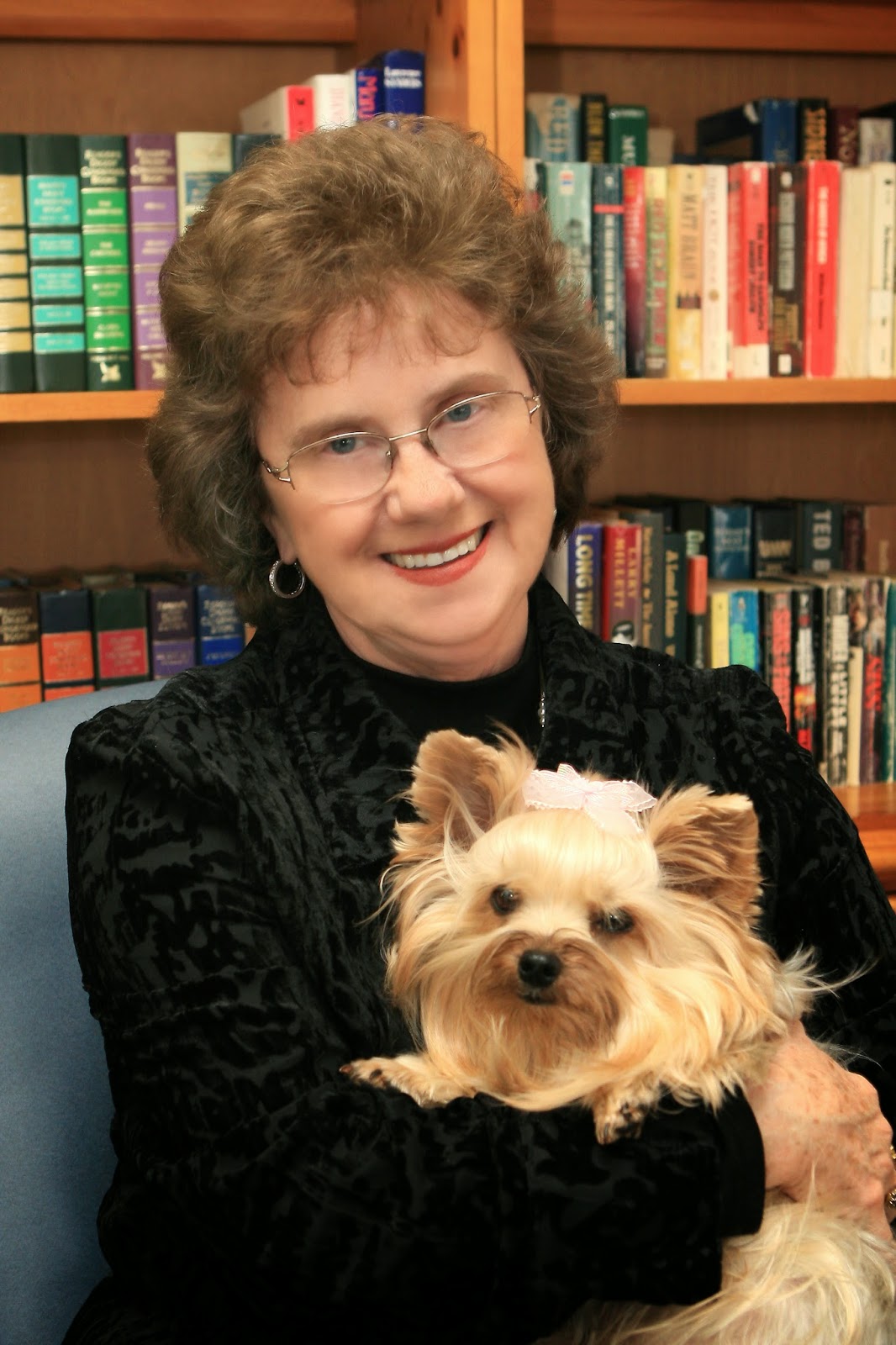 I live in Colorado with my husband and my two Yorkie kid dogs: Stormy, four pounds, and Eli, six pounds. I’m a native of Colorado, but I’ve lived several years in Wyoming and Montana.  I draw from these beautiful states for most of my books.

My Western Historical Romances are: Montana Star, Sapphire Blue, Unconquerable Callie,  Wyoming Heather and One Shingle To Hang.  Tears In The Wind is a contemporary romance.

Then I changed genres from my beloved romances and wrote, under the pen name of D. M. Woods, my first suspense/thriller: Death Crosses The Finish Line. The second book in this ‘death’ series, Death Is A Habit, came out January 8, 2014. I am currently working on the third book in the ‘death’ series, Death Walks C Dock.  I am also working on another  Western Historical Romance, Montana Man. It features the characters readers came to know and love in Montana Star. Truly, I mean it when I say my greatest pleasure next to writing is having my books read and enjoyed. There are many more stories just waiting to be written.

a Rafflecopter giveaway
Posted by Maria at Monday, October 13, 2014