Virtual Book Tour for The Lion's Embrace by Marie Laval

Join author Marie Laval on her Virtual Book Tour for The Lion’s Embrace, presented by Reading Addiction Book Tours from January 18 – January 31, 2014.  Please leave a comment or question below to let Marie know you stopped by.  You can follow the rest of Marie’s tour here. 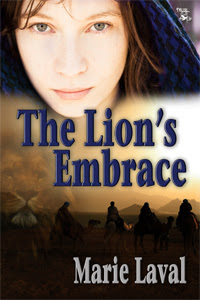 Arrogant, selfish and dangerous, Lucas Saintclair is everything Harriet Montague dislikes in a man. He is also the best guide in the whole of the Barbary States, the only man who can rescue her archaeologist father from the gang of Tuareg fighters that has kidnapped him.  As Harriet embarks on a perilous journey across Algeria with Saintclair and Archibald Drake, her father’s most trusted friend, she discovers a bewitching but brutal land where nothing is what it seems.

Who are these men intent on stealing her father’s ransom? What was her father hoping to find in Tuareg queen Tin Hinan’s tomb? Is Lucas Saintclair really as callous as he claims—or is he a man haunted by a past he cannot forgive? Dangerous passions engulf Harriet’s heart in the heat of the Sahara. Secrets of lost treasures, rebel fighters, and a sinister criminal brotherhood threaten her life and the life of the man she loves.

Does forever lie in the lion’s embrace?

It was a narrow valley where the river curved into a bend, secluded by thick bushes and reeds. After a quick glance around to make sure she was alone, she stripped and walked naked into the water. It was so cold it took her breath away. She gritted her teeth, clutched her bar of soap, and walked into the river until the water reached her hips. Getting rid of the grime and sweat of the past few days was worth the torture…

Holding her breath, she dipped into the water before standing and lathering soap over her body and her hair.

The light was changing. A transparent gold dust touched the hillside, the top of the trees. The sunrise streaked the sky with red, orange, and pink hues, reflecting into the river. She was alone in the world, in a bubble hovering between sky and water.

It was then she heard the growling. Stones tumbled down the hillside seconds before a male lion jumped onto the river bank, sleek and agile. It approached the river and started drinking. It hadn’t seen her. Yet.

Her heart thumping with terror, she ducked under the water very slowly, careful not to make any ripples on the surface. How long would she have to hold her breath? How long did it take a lion to quench its thirst after a night spent hunting? What if it saw her and came after her? Did lions, like cats, hate water? Her lungs started to burn, she felt close to choking. When she couldn’t hold on any longer, she popped her head above the water and took a long, long breath.

The lion had gone.

“You are one lucky woman,” a voice called from the bank.

Still breathless, she spun round. Saintclair crouched near the water, a knife in one hand, a pistol in the other.

“How l-long have you be-been here?” she stuttered, her teeth chattering from cold and shock.

Had he watched her undress and get into the water?
Actually, she’d rather not know.

She moved her legs and arms, numb and stiff with cold.

“Is it safe? Has the lion gone?” She looked toward the hillside.

“You’re safe. From the lion, that is.” He narrowed his eyes. “I, on the other hand, might just want to throttle you for disregarding my orders. I knew taking you with us was a mistake. I knew you were stubborn. I didn’t realize just how reckless, how stupid you were. You could have been mauled to death just then.”

“I handled the lion perfectly well on my own.” She tilted her chin. Her heart had almost stopped with fright, but there was no reason to tell him.

He stood up, put his pistol in the holster on his hip, slid the knife in his boot, and walked toward the edge of the water. His face was so tense, his eyes so steely, that she recoiled. He was going to walk into the river, pull her out and…

“Damn it, woman, you were told not to leave the camp alone. You were warned about lions roaming this area. There are all sorts of dangers here—wild animals, snakes, scorpions.” He looked up towards the hillside. “Raiders.”

She swallowed hard, followed his gaze toward the top of the hills.

“If that lion hadn’t been so old and half-blind, you wouldn’t be talking to me now.”

“It seemed pretty sprightly to me,” she muttered.

“Get out. You’re freezing, and your lips are blue,” he said without a trace of sympathy in his voice.

She shivered, nodded. “Only if you turn round.”

“It’s a bit late to play the prude,” he muttered, but he obliged and faced the other way.

So he had seen her naked. Well, he wouldn’t see her now. She covered her chest with her arms and walked to the shore. She threw a nervous glance in his direction before stepping out of the water, but he remained immobile, his back to her, as if he had been turned into rock.

She gathered her clothes as fast as she could, stumbling on pebbles in her haste, and chose a large bush behind which to get dressed.

Her fingers were too cold, too stiff to fasten her tunic’s tiny buttons. She had to leave it open for now. She put her boots on and ventured out of the bushes.      Saintclair took one look at her and snarled.

“You can’t go back to camp half dressed.”

She pulled her tunic across her chest to cover up, shifted uncomfortably on her feet.

“I can’t do the buttons up,” she said, showing him her hands still red raw with cold.

He tightened his lips but didn’t answer.

The sun now peeped above the rugged hilltop, a huge orange ball setting the sky on fire. Dazzled, Harriet caught her breath.

“This is…magnificent. We don’t have sunrises like that in England.”

He gazed at her face, at her eyes filled with wonder.

“No but you have rain, summer storms.”

He stepped closer and looked down into her eyes. “I always wanted to stand outside in a thunderstorm.” Her eyes were a rain cloud right now, cool and soothing.

“Maybe, but what a beautiful way to die,” he said. His breathing was a little faster, his gaze heavier.

She parted her lips but didn’t answer. The colour of her cheeks deepened. In the opening of her tunic, the gold pendant gleamed against her milky white skin. His fingers itched to toy with it and bring it to his lips, still hot and fragrant from her body.

About Marie Laval
I was born in France and grew up in the beautiful city of Lyon. I moved to England several years ago, and now live in the lovely Rossendale Valley in Lancashire where I am still trying to get used to the damp and cold weather. Writing was always my passion. I particularly enjoy writing historical fiction and romance. 'Angel Heart' is my first published novel. My second historical romance 'The Lion's Embrace' was released as an ebook in February 2013 by MuseitUp Publishing.