Virtual Book Tour & Giveaway - Not Quite Dating by Catherine Bybee 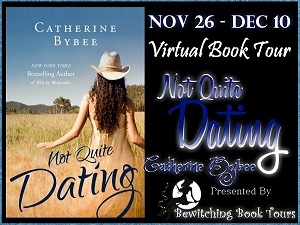 Welcome to my stop on Catherine Bybee's Not Quite Dating Virtual Book Tour.  Please be sure to leave a comment or question below to let Catherine know you stopped by.  You can use the Rafflecopter form below to enter her tour wide giveaway below.

Guest Post - I Wanna Be Nora by Catherine Bybee


I wanna be Nora when I grow up.

Love her or not, there isn’t a romance author out there that doesn’t know about Nora Roberts and her amazing accomplishments in the romance genre.

Her readers are loyal and stick with her even if she has a book that doesn’t please everyone. Although I’ve yet to find a single book that wasn’t loved by many. Every word she writes will be read…will be published. You can’t have a track record of 200 published novels and not have your publisher with their hands out looking for another book.

When I first started my journey of becoming a published author, I was looking only for validation. That nod came from a publisher saying ‘yes’ we’ll publish your book…then later came from readers and reviewers who said ‘yes’ we like your book. Finally, that validation came from earning a spot on several bestseller lists… USA Today, New York Times, etc.

Some might consider it balsey, or maybe selfish of me to want the next level. The level where I know every book I write will be read by many and not just a few. Where a publisher is always interested in my work and is willing to pay a fair amount for it.

But well… I want that!

Yeah… I wanna be Nora when I grow up. 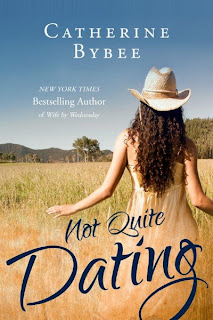 Not Quite Dating
By Catherine Bybee
Not Quite Series Book One

Waitress and single mom Jessica “Jessie” Mann is practical to a fault. Even if she had time to date, which she doesn’t, she’d be determined to provide her son with a more secure upbringing than the one she had—and that would mean a husband with big bucks. When Jack Morrison—a sexy-as-sin, seemingly broke customer with a cowboy hat and a seductive grin—tries to flirt with her, she shoots him down. She doubts a carefree dreamer like Jack can provide the financial stability she needs. Yet with Christmas just weeks away, and Jessie not wanting to spend it alone, the charming Texan is proving hard to resist.

As the heir to the Morrison luxury hotel empire, Jack is used to being fawned over. But Jack needs someone who will fall in love with him—not his wealth. He’s set his sights on Jessie, though her hardened heart just might get in the way…To be sure, he conceals his true identity and offers to help Jessie find the rich husband she seeks. But Jack’s daring charade may rob him of the holiday wish he wants most of all… 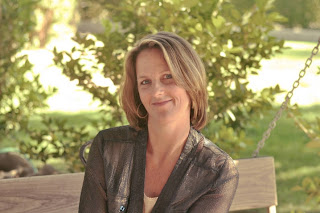 New York Times bestselling author Catherine Bybee was raised in Washington State, but after graduating high school, she moved to Southern California in hopes of becoming a movie star. After growing bored with waiting tables, she returned to school and became a registered nurse, spending most of her career in urban emergency rooms. She now writes full-time and has penned the novels Wife by Wednesday and Married by Monday. Bybee lives with her husband and two teenage sons in Southern California.

No matter how smart you plan to be about choosing the man in your future, what happens to Catherine Bybee's characters in Not Quite Dating proves that "the heart wants what the heart wants".  The first book in Ms. Bybee's new Not Quite series, I was captured by this sweet and heartfelt contemporary romance.  With a well paced plot, good secondary characters and an interesting premise about love and money, this story is sure to please any romance reader.

Determined to make better decisions the second time around, single mom Jessica "Jessie" Mann, has no intentions of falling for the average guy.  Taking her mother's advice to heart, "You can just as easily fall in love with a rich man as you could a poor one. Date only rich men", Jessie ignores her instant attraction to "Jack Moore", a new customer with a sexy as sin smile and a cowboy hat.  Wanting to give her son everything she never had, Jessie wants someone who has both feet on the ground and isn't a dreamer.  Ms. Bybee did a really good job developing Jessie's character, even though she could come off as mercenary, once you get to know her story you understand why she's trying to make a decision about her future with her mind instead of her heart.  It's great watching her struggle between what her mind tells her and what her heart is demanding her to do.

Rich in his own right, hotel heir Jack Morrison wants to find a woman who wants him for himself and not for his money.  Deciding to hide who and what he really is, when he meets Jessie at the local "Denny's" he lets her think he's "Jack Moore, an ordinary cowboy temporarily working at one of the Morrison luxury hotels.  Telling one lie after another isn't the best way to get a woman to fall in love with you, but it's the only way he'll know he's being loved for himself.  Ms. Bybee did a fantastic job with Jack's character; even though he's lying through his teeth it's completely understandable - everyone wants to be loved for who they are not for how much money they have.  Every time Jack has to tell Jessie a lie, it's done with the knowledge that it could very well come back and bite him.

The scenes between Jessie and Jack are well written and lots of fun; they have great verbal and physical chemistry.  Both very likable characters, their "friendship" is helped along by Danny, Jessie's young son, and Monica, Jessie's younger sister, both who recognize they've fallen in love.  Ms. Bybee does an excellent job developing Jessie and Jack's romance, it grows as they spend more time together and Jessie learns to trust Jack more.  I really liked how responsible Jessie was about who and how she introduced people into Danny and Monica's life.

Will Jessie learn to listen to her heart instead of her head?  Will Jack be able to tell Jessie the truth before she finds out on her own?  You'll have to read Not Quite Dating to find out.  I enjoyed it and I think you will too.  I can't wait to read Not Quite Mine, the next book in the series scheduled to be released in early 2013.

FTC Disclosure: I received a complimentary copy of this book in exchange for a fair and honest review.

a Rafflecopter giveaway
Posted by Maria at Monday, November 26, 2012