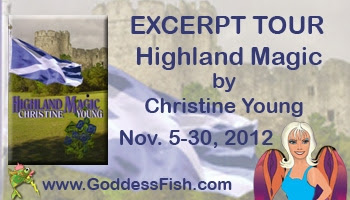 Welcome to my stop on Christine Young's Excerpt Tour for Highland Magic.  Please be sure to leave a comment or question below for Christine as she will be  awarding a $15.00 Amazon Gift Card to a randomly drawn commenter during the tour, and ten MacPherson book marks to randomly drawn commenters.  You can follow all of her tour stops here, the more often you comment, the better your odds of winning.  I'll be posting my review for Highland Magic this weekend. 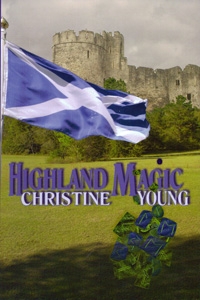 Throughout the Highlands she is known as Keely, the witch woman. She is a great healer-a woman whose dreams come true. Ian MacPherson is a man who puts honor, loyalty and duty above everything. Their lives are entwined when Ian is sent by the Scottish King to bring Keely to trial for witchcraft. He is attacked and left for dead, but Keely rescues him.

When he wakes, he discovers he has no memory. As he remembers his lost past, Ian finds that his need to protect the woman who has saved his life eclipses his duty to his king and country., He is a man torn between honor and duty to his country and the woman he loves.

Her image was too enchanting, too mysterious, too elusive to hold. She danced through his imagination, a summer breeze, soft, sweet and languid.

Making love to Keely seemed so real, yet he sensed his memory was naught but a dream. Warmth filled and surrounded his body. He didn't want to wake from the all-encompassing, magical dream claiming him.

She trailed one long, slim finger across his jaw. For a moment, his body jolted then shuddered from the delicate yet fleeting contact. With his hands, he framed her face and memorized every detail, every curve and hollow.

Her lips parted as if she meant to speak, but the gesture was an invitation he wished to partake of and explore more thoroughly with a kiss.

She was untried and innocent. In his arms, she was every fantasy come true. Her fingers wove into his hair at the back of his neck and she pulled his lips to hers. He reveled in the dream and the hope that perhaps she wanted him, perhaps as much as he wanted her.

He kissed her, his tongue tracing the seam of her lips, urging them to open for him. She sighed softly, her breath whispering across his lips, but she didn't grant him entrance.

He kissed her cheeks, her nose and she watched him, studying him with intense concentration and tilting her head a little bit sideways. Her amber eyes intensely passionate and shining with desire.

"Obrian," she whispered. The smile she gifted him with sent him spiraling heavenward.

A wave of anger also swept through him. He wanted her to call him by his name. What is my name? He'd move heaven and earth to recall his name. 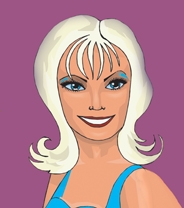 Born in Medford, Oregon, novelist Christine Young has lived in Oregon all of her life. After graduating from Oregon State University with a BS in science, she spent another year at Southern Oregon State University working on her teaching certificate, and a few years later received her Master's degree in secondary education and counseling. Now the long, hot days of summer provide the perfect setting for creating romance. She sold her first book, Dakota's Bride, the summer of 1998 and her second book, My Angel to Kensington. Her teaching and writing careers have intertwined with raising three children.  Christine's newest venture is the creation of Rogue Phoenix Press. Christine is the founder, editor and co-owner with her husband. They live in Salem, Oregon.