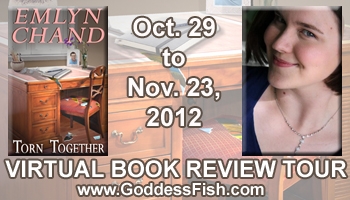 Welcome to my stop on Emlyn Chand's Virtual Book Review Tour for Torn Together.  Please make sure to leave a comment or question below to let Emlyn know you stopped by.  You can enter her giveaway where she'll be awarding a $50 Amazon GC and autographed copy of Torn Together to a randomly drawn commenter during the tour.  You can follow all of her tour stops here, the more often you comment, the better your odds of winning. 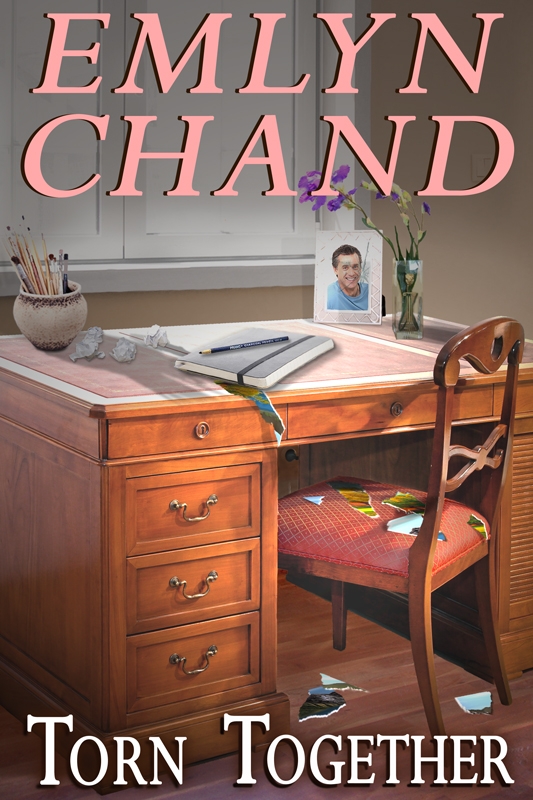 From her cheating boyfriend to her dead father and cold, judgmental mother, Daly knows she can’t trust others to be there when it counts. This cynicism begins to melt away when she meets Kashi, a light-hearted charmer from India, who decides he cares too much to let her fade into the background of her own life. After a series of false starts, their quirky romance carries them to India, where Daly must win the approval of Kashi’s family in order to seal their “forever.”

Meanwhile, Laine struggles to cope with the pain of early widowhood, fleeing into the pages of her well-worn library and emerging only to perform her duties as a social worker at the crisis pregnancy center. Although her daughter wants nothing more than to work as an artist, Laine doesn’t know how to redirect Daly to a more suitable profession without further damaging their tenuous relationship.

Can Laine look past her pain to learn from an unlikely mentor? Has Daly finally found someone whom she can trust? Will the women recognize their common bonds before the relationship is broken beyond repair?

Kashi pushed the second door open, and a wall of heat crashed into them. She peeled off both Kashi's jacket and her own, letting the hot air dry her clothes.

"Told you." He smiled when she handed his jacket back to him.

She stepped toward the stacked stone fountain at the center of the room, and listened to the simple harmony of the flowing water.

"I love this place," Kashi said. "Engages all the senses."

She agreed, taking in the sights and scents of the blossoming flowers, listening to the gentle trickle of the fountain, and allowing the warmth of the garden to embrace her. It engaged all the senses, as Kashi had said, except for taste. She glanced over at him, fixing her gaze on his full lips.

Why aren't I brave enough to initiate the kiss myself? "So beautiful," she said, bringing her eyes to meet his.

A curious Postman Butterfly landed on the fountain next to them. They watched the beautiful insect rub its forelegs together and flex its wings before flying away almost as quickly as it had landed. She followed as the Postman flitted upward, watching as dozens of butterflies floated above at the top of the glass dome. She reached to her side and took Kashi's hand, then closed her eyes and imagined him reaching up to pluck a butterfly from the sky, thus completing the picture from her diary, completing their hat trick of fate.

Someone bumped into them from behind, ruining the moment.

Zoo visitors continued to pour into the tiny garden, seeking shelter from the rain. The influx of too many people into too small a space compromised the romanticism of the place. A handful of volunteers in red vests stood guard, watching for any misconduct.

"This way." Kashi headed toward the exit. "It won't be so crowded."

She followed him through the chain curtain and into the free-flight aviary.

A Scarlet Macaw greeted them with an impertinent squawk as they strolled deeper into the indoor jungle.

Daly stopped to examine the colorful parrot, but Kashi continued forward, pulling her deeper into the warm sanctuary.

The winding trail was all but deserted. Most visitors clung to the more popular butterfly garden, which meant the two of them were alone in the presence of the birds. Rounding a corner, they came upon a secluded nook under a Caribbean bleeding tree still vibrant with greenery, even though the trees outside had long since begun to yellow and shed their leaves. High in the tree, long-necked Scarlet Ibises hopped about, competing to find the best branch for perching. A concrete wall, carved to resemble a natural rock structure, shielded them from the view of potential onlookers.

Daly marveled at the playful Ibises above. "They're so—"

Kashi interrupted her by bringing a hand to her cheek and taking a step into her.

Is this it? Is this the moment I've been waiting for all day? She didn't have much time to wonder, because within an instant, his lips drew forward to meet hers.

Her heart trembled as he parted her lips with his tongue. She pressed closer still and raked her hands into his hair. Locked in his embrace, she let her inhibitions go, wanting only more, more, more as they kissed in time to the cacophony of tweets, chirps and whistles of their avian companions.

If only this moment could last forever. If only I could live here permanently instead of at home with Laine.

Kashi pulled away and ran a finger across her lower lip.

She cast a weak smile. Her face flushed warm, but not from embarrassment. She couldn't allow this encounter to go on any longer—unless, of course, they really wanted to get in trouble with zoo security.

Kashi hummed one long beat and once again pulled her into him, this time in an embrace of arms rather than lips.

Her cheek pressed into his collarbone, where the rhythm of his heart thumped wildly against her face.

Bringing his lips to her ear, he whispered, "So, how was that for life-changing?" 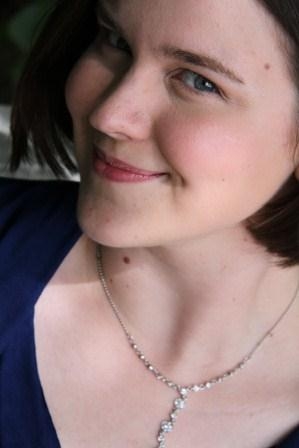 AUTHOR Bio and Links:
Emlyn Chand emerged from the womb with a fountain pen clutched in her left hand (true story). When she's not writing, she runs a large book club in Ann Arbor and is the president of author PR firm Novel Publicity. Best known for her Young Adult novels, she is also developing a small, but devoted, following to her children's book series and is beginning to dapple in other genres as well. Emlyn enjoys connecting with readers and is available via almost every social media site in existence. Visit EmlynChand.com for more info. Don't forget to say "hi" to her sun conure Ducky!

Fractured family relationships, unplanned teenage pregnancy and a person's personal fate are just some of the themes covered in Torn Together by Emlyn Chand.  With a light touch of humor, plenty of emotional angst and likable characters, Ms. Chand drew me into her story about three different generations of women whose experiences together would shape their lives.  Set in contemporary times and taking place in both the United States and India, this tale of love and second chances is guaranteed to please.

An aspiring artist, Daly (pronounced like Talley), is struggling to make her dreams come true.  Stuck in junior college while trying to improve her G.P.A. and get a coveted scholarship to art school, she lives at home with her distant mother.
The only highlight in Daly's life is her relationship with her boyfriend, that is until she catches him with another girl.  Still mourning her father's death ten years prior, Daly knows she's a magnet for nothing but sorrow.  Pushed into making the acquaintanceship of a young pregnant teen her mother's trying to help, Daly soon finds herself charmed by this young woman who's trying to make the best of a difficult situation.  Meeting an attractive Indian man and falling in love convinces Daly her life is finally going in the right direction.

Laine, Daly's mother, is a widow still struggling with the loss of her husband.  Unable to deal with her sorrow, she's let her relationship with her daughter become strained and isn't sure she knows how to repair the damage.  While her own relationships have issues, the one thing Laine can count on is her ability to do her job as a social worker.  Determined to help pregnant twelve year old Meghan prepare for impending motherhood, Laine soon finds herself being the one taught lessons in life.

Kashi, a young pharmacist, has a simple outlook on life, if someone is meant to be in your life, you'll meet them three times.  While he's instantly attracted to Daly, he refuses to ask her out until they've met by accident three times.  Luckily for both of them, fate does plan for them to be involved.  As Kashi and Daly spend time together, Kashi's positive outlook on life has a transforming effect on Daly's soul.  Ms. Chand did a really good job developing their relationship, while physically attracted to each other, they become friends first.  While this isn't a romance novel, there is a romance which takes place and which changes the lives of all the characters involved.

Will Daly and Kashi  be able to convince his traditional Indian parents their interracial relationship will work?  Will Daly and Laine ever become the mother and daughter they once were?  And will Meghan, the young pregnant teen wise beyond her years, become the kind of mother she desperately wants to be?  You'll have to read Torn Together to find out.  I loved it and can't wait to read more of Ms. Chand's work.

My Rating:  5 out of 5 Crowns and A Recommended Read

FTC Disclosure:  I received a complimentary copy of this book in exchange for a fair and honest review.

Please make sure to leave a comment or question below to let Emlyn know you stopped by. You can enter her giveaway where she'll be awarding a $50 Amazon GC and autographed copy of Torn Together to a randomly drawn commenter during the tour. You can follow all of her tour stops here, the more often you comment, the better your odds of winning.