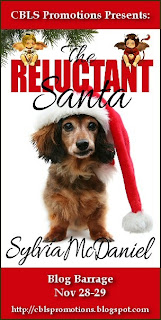 Welcome to my stop on Sylvia McDaniel's Blog Barrage for The Reluctant Santa.  Please be sure to leave a comment or question below for Sylvia to let her know you stopped by.  You can use the Rafflecopter form below to enter her tour wide giveaway.  You can follow all of the tour stops here.  The more often you comment, the better your odds of winning. 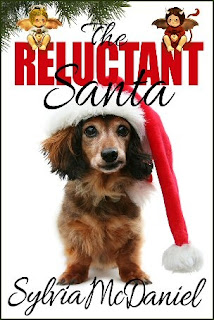 The Reluctant Santa
by Sylvia McDaniel
Published by Virtual Bookseller

“His soul is mine,” Devon, the devil's angel, said. He watched the humans, who were oblivious to his presence, gathered in the sales office. One of the best things about being an angel was his ability to pop into just about anywhere and spy on his subjects without their knowledge. He could observe the humans as if were watching a play and even occasionally act as director.

A chill wind howled outside the downtown Denver office, heralding the arrival of winter and the holiday season. The perfect time of year to increase his soul count. Devon studied his next soul, a brown-haired young man with expressive brows and a quirky grin. Unbeknownst to him, the salesman's life meter was about to expire unless he made drastic changes.

“Devon," a voice echoed into the atmosphere before the being that irritated him the most shimmered into his vision. “Doing a soul count before he's yours?”

Slowly, an angel materialized, clad from head to toe in a white leather jacket and white knee-high boots fit snug over white leather pants. A gold belt around her waist, held a cross that signified sergeant, angel, first class. Her halo was tilted at a rakish angle. In earth terms, Gabriella looked hot.

“Whoever is in charge of your wardrobe, I like the changes they’ve made,” Devon said, letting his eyes rake her until a searing heat reminded him he was crossing boundaries. "Please tell me they ditched the boring robes."

With a toss of her blonde hair, her blue eyes flashed, glinting silver as her brows rose.

“My robes are hardly boring, but no, one of my cases is a motorcyclist. I'm riding shotgun today, trying to keep him from splattering all over the highway. The robes kept blowing up in my face, so I found a solution.”

"Nice!" Devon shook his head and forced his eyes back to the human whose life he'd soon influence. “I thought your promotion at Easter took you out of the saving souls division.”

Gabriella smiled as the air around her shimmered. Why didn’t the angels from purgatory patrol get that shimmery essence?

“Devon, we work so…well together” she said, drawing out the word until he wanted to snap at her. He held onto his temper.

“We're all looking for ways to make quota this time of year. Only the strongest stay out of the pit, and every time I come up against you, I lose. But not this time. This one belongs to me,” he announced, staring at the man whose only interest in life was making money. No family, no girlfriends, no friends— just work and money.

Gabriella tsked. “Now why would you want to send this poor man to hell for eternity? He just needs a little coaxing to choose the right path.”

Devon sighed. “His time is about to expire. I'm here to collect his soul.”

“Maybe,” she said. “Unless, I can give him some guidance and save him from evil.”

“Not this time. Heavenly angels may not be able to play dirty, but I can,” he said, smiling at Gabriella. “And I intend to win this one.” Gabriella laughed.

"Always so arrogant, Devon." She glanced at their human. “His case is challenging, but I'm certain I can help him.”

She turned toward Devon, her brows rising. “Playing dirty landed you where you are now. Why should I expect anything less?”

“How I got here doesn’t matter. I need this soul,” he snapped. "You make your soul count or the big man sends you back to the pit to fight and claw your way back for another chance."

“And Colin McDermott needs to be saved,” Gabriella said, swirling back to their subject. “I mean, look at the poor man. He has no idea his priorities are in the wrong place. He's a selfish, greedy man because he's unloved."

Gabriella shook her head at Devon, her blue eyes darkening with some sort of power. “Even you deserved love, Devon. In fact, if I had been your angel, I would found someone to show you love. Hopefully, you'd have been smart enough to grab the lifeline."

“Well, you weren't my angel, and now I'm the big man's soul catcher.”

“It's simple, Devon. Why would you want to lure more men into the darkness you already face?” she asked.

Devon clenched his fist, struggling to control the frustration that spiraled through him. Hell was not a place anyone planned on going. “The pit!" he said. "Let’s just concentrate on the human.”

"I already was." She contemplated Colin McDermott. “He's quite handsome with those long, sandy lashes and sparkling honey eyes. If I were human, one look and he’d melt my heart.”

“Women on earth know he's not a good risk. I could wrap this case up before Christmas, if you weren't here."

“Too bad. I'm here to keep you from destroying him,” she said, giving him a stern frown. “The poor soul has no idea of what he's about to face. I'm sure you’ve got some nasty surprises in store for him, some hard to resist temptations. But hopefully, with my guidance, he'll make the changes his life needs.”

Devon shook his head. “No, by Christmas he’ll be mine. Count on it." 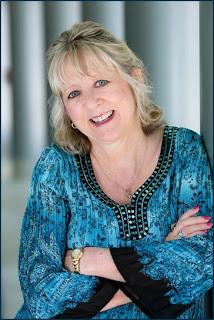 Sylvia McDaniel and her very supportive husband Don, the love of her life, live in with son Shane, Putz the klutzy dachshund and Ashley our shy dachshund. During the day, she works for a small insurance agency from home, helping clients with their commercial insurance coverage.

The weekends are spent working out in the garden until the temperature climbs above ninety degrees. Recently, with the help of her husband, she learned to make homemade blueberry and blackberry jam. Cooking is not her favorite past-time and she prefers Don’s cooking any day of the week.

Currently, she’s written fourteen novels.  In the last year, she’s been a finalist in six writing contests and was a 1996 Romance Writers of America Golden Heart finalist. Sylvia is very involved with the Dallas Area Romance Authors.

She can be reached by email at Sylvia.McDaniel@verizon.net.

With a message that family is more important than money and prestige, Sylvia McDaniel treats us to a second chance romance taking place during the holidays.  With a likable, yet also annoying, hero and heroine, a precious child and well written secondary characters, Ms. McDaniel's story is a good reminder of what's important, regardless of the season.  Ms. McDaniel's well paced plot and setting round out this entertaining tale of love.

Ambitious and hardworking, salesman Colin McDermott has worked all year to earn a promotion to Regional Sales Manager of the West Coast.  Discovering the promotion he thought was a done deal is now up for grabs thanks to some last minute sales by a rival, Colin heads out to make additional calls on prospects he's trying to turn into clients.  He didn't plan on running into Brooke, his college sweetheart, at one of the prospective hospitals he's trying to sell software to or on having to play a last minute Santa Clause to a roomful of kids.  Ms. McDaniel does a good job developing Colin's character; at first he comes off as a single minded, almost obsessive businessman who has money and success on his mind.  As we get to know Colin and his background, we get to see a man who grew up poor and thinking both of his parents abandoned him.  Discovering he has a child he never knew about throws him into an emotional tailspin and makes him question what's really important.

Single mother, Brooke Warren, is content working at a local hospital and raising her daughter Olivia.  Running into Colin, her college sweetheart, and the man who is secretly the father of her child, is something she never planned on.  Talking Colin into playing Santa Clause in a last minute emergency is easy, coming clean about their daughter is not.  While Brooke plans to keep Colin at arms length, she wasn't counting on Olivia, an angel named Gabriella and a demon named Devon, ruining all of her plans.  Ms. McDaniel did a good job with Brooke's character; she's responsible, a loving mother and a good daughter.  She's also scared of letting Colin into their daughter's life and into her heart.

The scenes between Colin and Brooke are well written; they're both likable characters but their fear, their stubborn behavior and their unwillingness to forgive their shortcomings in the past, made me want to slap them once in a while.  Luckily Olivia, Gabriella and Devon always know what to do to bring them together, even if it wasn't what they planned.  While Ms. McDaniel did a good job through most of these scenes there were a few times when both Colin and Brooke's emotional immaturity and inability to be totally honest with each other got annoying.

Will Colin choose money and a promotion over Olivia and Brooke or will he make peace with his past and look towards a brighter future?  Who will win the battle for Colin's soul over the holidays - the angel or the demon?  You'll have to read The Reluctant Santa to find out.  It's a short, entertaining holiday read.

a Rafflecopter giveaway
Posted by Maria at Wednesday, November 28, 2012