Spotlight & #Giveaway for Third Son's A Charm by Shana Galen 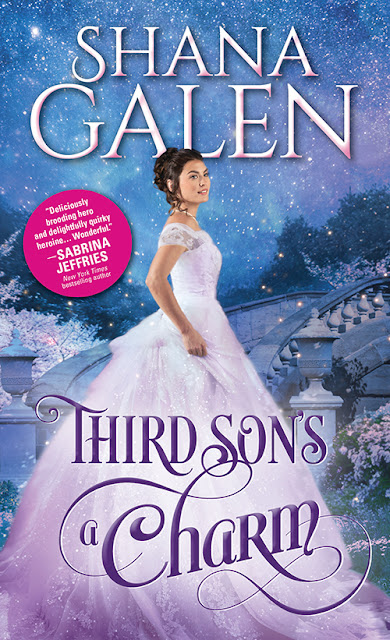 Third Son’s A Charm
By Shana Galen
The Survivor’s, Book 1

Ewan Mostyn thinks a job as a duke's daughter's bodyguard will be easy―but Lady Lorraine has a few tricks up her sleeve that spark an undeniable passion...

Fiercely loyal to his friends and comrades, Ewan Mostyn is the toughest in a group of younger sons of nobility who met as soldiers and are now trying desperately to settle back into peaceful Society. Ewan trusts his brawn more than his brains, but when he's offered a job watching the Duke of Ridlington's stubbornly independent daughter, he finds both are challenged.

Lady Lorraine wants none of her father's high-handed ways, and she'll do everything in her power to avoid her distressingly attractive bodyguard―until she lands herself in real trouble. Lorraine begins to see Ewan's protectiveness in a new light, and she can only hope that her stoic guardian will do for her what he's always done―fight for what he wants.

“Kiss me,” she said, looking up at Francis with adoring eyes the bastard did not deserve in the least. “I could wait forever if you would but kiss me.”

It was perhaps the silliest speech Ewan had ever heard. It was the sort of thing he expected one of Beaumont’s women to say, and yet despite the melodrama of the sentiment, at that moment Ewan hated Francis more than he ever had when his cousin had been his daily tormentor.

His loathing was so strong and so incomprehensible that Ewan regained control of his body and stepped out from behind the topiary.

Francis saw him first, and he stiffened and stepped back, putting a respectable distance between himself and Lady Lorraine. His expression was wary and, to Ewan’s satisfaction, frightened. The lady spun around as well, but her face showed no fear, only annoyance. She gave a long sigh. “Mr. Mostyn, I believe you know your cousin, Mr. Mostyn.”

“Ewan.” Francis looked him up and down. “We seem to keep meeting. Run along now. Lady Lorraine and I were having a private word.”

Ewan held out his hand to Lady Lorraine. “Come.”

“I see your vocabulary remains much the same,” Francis remarked. “As I’m certain you will use your simple grunts and growls to inform His Grace about this meeting, be sure to mention that I did nothing improper.”

“More’s the pity,” Lady Lorraine muttered. “At least the lecture and scolding would have been worth it.”

Ewan had the urge to laugh. Instead, he beckoned her with his outstretched hand. She did not take it. “I am not a dog, Mr. Mostyn. You needn’t crook your finger at me.”

Francis bowed. “I see I am no longer needed. My lady, sleep well tonight. I will see you…soon.” With what Ewan perceived was to be a meaningful look, Francis marched in the direction of Carlton House. Since the lady seemed to have such an objection to them, Ewan folded his arms across his chest. He waited for her to speak. He felt he should say something, but he was not certain what that something should be.

He had supposed Francis to be taking advantage of the lady, while it appeared she was the one intent on ruination. Francis was no paragon of honor and virtue, and Ewan would have liked little more than to beat the man to a pulp. But he could not fault his cousin for the scene he’d witnessed tonight.

“You won’t tell my father, will you?” Lady Lorraine finally broke the silence.

Ewan let out a breath of surprised air—half laugh, half incredulity.

The lady grasped his forearm. “If you do, it will not only doom me, but it will reflect badly on you as well.”

Ewan inclined his head, acknowledging the point. He’d made mistakes before, and he always took his punishment like a man. He was not much of a gentleman, but he had retained enough of his upbringing to know that one did not lie or cheat to avoid trouble. One faced the consequences of his mistakes with head held high. “Then so be it.”

She gaped at him. “You do not even care? You will be dismissed.”

Ewan blew out a breath. He did care. He cared very much, much more than he wanted to admit to.

Her hand on his forearm tightened, and he looked down at her. The damned chit was shivering with cold. Ewan was impervious to all but the coldest temperatures, but she looked almost blue. “Very well. Tell him. Nothing happened anyway.”

“Not for your lack of trying. I should tell your father you don’t need a bodyguard. You need to be locked in a convent.”

Now her eyes narrowed, and she released his arm as though it were filth she could not bear to touch any longer. “So now I am to be censured by you?”

The question took him off guard. Conversation with women generally had the effect of unsettling him. He could never predict where their maze-like minds might wander. Conversation with men began at point A and ended at point B. Women often meandered to C then R and back to L before coming to the point.

“It is a simple question, Mr. Mostyn. Are you married?”

Ewan gaped at her. The question was so wildly inappropriate that, in his opinion, she had abandoned the points of the alphabet all together.
She waved a hand. “Yes, I know I am not supposed to ask you that, but humor me. I am making a point. Just answer yes or no.”

He shook his head as he did not trust his voice at the moment.

“Of course you are not. And yet no one thinks anything of the fact that you have bedded a woman who is not your wife. If I had to guess, with those eyes and those shoulders and chest”—she looked him up and down, and he actually felt himself heat at her frank perusal—“I imagine you have bedded more than your share of women.”

Ewan’s head was spinning at the rapidity of her speech, but what he did understand was that she had just complimented him. She admired his body, and the thought of her eyes on him caused him to have to take a breath. His chest felt tight and he lifted his hand to loosen the goddamn cravat before he remembered where he was.

“Of course,” she went on, “it is seen as perfectly natural for a man to want to kiss a woman, touch her, undress her, take her to bed, and—”

Ewan cleared his throat, not only because the already inappropriate conversation had descended beyond the pale, but because her description of the intimacies between men and women made him think of doing those things with her. And now the woman had not only fired his blood but stirred his rod. If she continued in this vein, his state of growing arousal would be evident to both of them.

“My point,” she said—and thank God she was finally reaching it—“is that it is considered natural for men to want these things, but when a woman wants them, then we should be locked away.” She gestured wildly with her hand, losing hold of her wrap so it slid to the ground and trailed after her as she paced. “What is so wrong with wanting a man to kiss me?” She gave Ewan a direct look, challenging him to give her an answer. 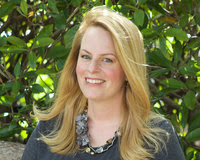 Shana Galen is the bestselling author of fast-paced adventurous Regency historicals, including the RT Reviewers' Choice The Making of a Gentleman. Booklist says, "Galen expertly entwines espionage-flavored intrigue with sizzling passion," and RT Bookreviews calls her "a grand mistress of the action/adventure subgenre."

She taught English at the middle and high school level off and on for eleven years. Most of those years were spent working in Houston's inner city.

Now she writes full time. She's happily married and has a daughter who is most definitely a romance heroine in the making. Shana loves to hear from readers, so send her an email or see what she's up to daily on Facebook and Twitter.

a Rafflecopter giveaway
Posted by Maria at Thursday, November 16, 2017