Blog Tour for The Texan Duke by Karen Ranney

Welcome to my stop on the Blog Tour, presented by Pure Textuality PR, for The Texan Duke by Karen Ranney. Please leave a comment or question for Karen to let her know you stopped by.

The Texan Duke
by Karen Ranney

As the ward to the late Duke of Lothian, Elsbeth Carew resides at the ancestral estate of Bealadair. Fiercely attached to the manor, she loves it more than anyone else. When Connor McCraight—the new Duke of Lothian—arrives, Elsbeth does not quite know what to make of the American who has inherited the title but has never even set foot on Scottish soil. The tall, ruggedly handsome Texan sweeps through Bealadair with an air of authority Elsbeth has never encountered.

Connor has no intention of making Scotland his home and hopes to sell the estate as soon as possible. But his plan is jeopardized when he meets Elsbeth. A sweet, gray-eyed beauty, she tempts him in ways no other woman has. As word spreads of Connor’s intention to sell Bealadair, his life is threatened—and the only woman who can save him may be the one he has hopelessly lost his heart to. 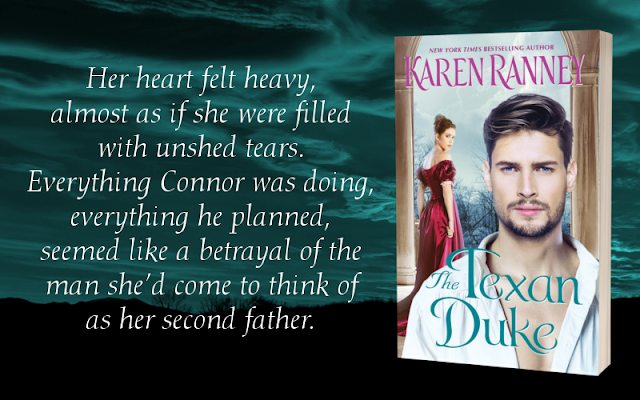 Everything was being readied for the man in the carriage approaching the long drive.

Would he care? Would he even notice?

The blowing snow obscured everything but the yellow glow of the carriage lanterns.
None of it belonged to them anymore. It was all owned by the man who would soon emerge from the carriage, the same man who could so easily wave his hand and banish them.

She shivered, wishing she had been able to wear her cloak. And a scarf around her throat. And a hat pulled over her hair. She couldn’t feel her lips or her fingertips.
People were stamping their feet against the packed snow of the drive and wrapping their arms around themselves. She could see plumes of their breath against the night sky.

Didn’t Rhona notice that everyone was about to freeze to death?

Sometimes, she thought that Rhona forgot that the people who staffed Bealadair were human beings. A great many of her dictates didn’t make sense. Yesterday she’d given an order that the laundress was to starch all the maids’ aprons and today no one was to sit or otherwise crease their uniforms until the duke arrived. You could either do the job you were supposed to do or you could walk around acting like a marionette.

Rhona made decisions like that, making changes that weren’t the least practical. A few months ago she’d given an order that all of the maids were to have their hair arranged in the same fashion, in an overly intricate braided bun. It took so long for the girls to arrange their hair that way that Elsbeth had countermanded Rhona’s orders, more than willing to go to battle for the staff. Fortunately, the duchess hadn’t noticed.

Rhona liked to issue decrees. She made pronouncements, waved her hand in the air like a queen, and demanded certain behaviors. Just as quickly, however, she forgot what she’d ordered.

Elsbeth had the feeling that Rhona really didn’t care. The duchess just liked being obeyed, even if it was only momentarily. Elsbeth took great pains to ensure that Rhona got that impression, even if it wasn’t exactly correct.

In the past year she’d taken on the duty of housekeeper. Mrs. Ferguson had increasingly incapacitating arthritis. It was easier for the poor woman to remain in her quarters than it was to traverse the many staircases of Bealadair.

None of the family had any objections to Elsbeth assuming the role. They wanted their meals on time, their suites kept clean and sparkling, and their lives not disrupted by petty things such as laundry, staffing expectations, and inconsequential details like leaky roofs.

As for Elsbeth, she enjoyed having something to do every day. Each evening she met with Mrs. Ferguson, consulting the woman over the tasks that needed to be done. The housekeeper had been at Bealadair for over twenty years and knew the house as well as—if not more so—the McCraights. The woman was an organizational genius, acquiring details about the many collections housed at the estate from armaments to historical documents.

No doubt the new duke would want to know the extent of his inheritance. Thanks to Mrs. Ferguson, she could provide him with an exact inventory.

The carriage was turning into the drive. A stableboy ran out to steady the horses. A footman strode forward to open the carriage door.

Rhona stepped up, accompanied by her oldest daughter, Lara, and Lara’s husband, Felix.

Elsbeth was too far away to hear the duchess’s words, but they were probably those of welcome. Maybe the duchess said something in Gaelic, evoking Scottish sentiment. After all, the new duke was an American who needed to be educated on his Scottish heritage. At least that’s what she’d been told.

No one had ever spoken of this unknown nephew. Until Mr. Glassey had sent back word from America, they had expected that the 14th Duke of Lothian and the Laird of Clan McCraight would be Gavin’s brother.

This man who stepped down from the carriage was a complete mystery.

Karen Ranney is an American author of historical and paranormal romance novels. She began writing when she was five.  Most of Ranney’s novels are set in Scotland and feature “believable characters, careful plotting, and simmering sexual tension.” She has been nominated nine times for a Romantic Times Reviewers’ Choice Award and won a Romantic Times Career Achievement Award in 2002 for British-set Historical Romance.  In 2014 Ranney began writing the paranormal romance series The Montgomery Chronicles, which center on a newly and unwillingly turned female vampire, and in 2016 began writing a spinoff series, The Furry Chronicles.  Ranney has also been on the USA Today Bestseller List as well as the New York Times bestseller list.  She lives in Texas.