Virtual Tour & #Giveaway for Contract to Wed by Holly Bush

Welcome to my stop on the Virtual Tour, presented by Goddess Fish Promotions, for Contract to Wed by Holly Bush.  Please leave a comment or question for Holly to let her know you stopped by.  You can enter her tour wide giveaway, where Holly will award a $25 Amazon/BN GC to one (1) randomly drawn commenter, by filling the Rafflecopter form below.  You can follow all of the stops on Holly’s tour by clicking on the banner above.  The more stops you visit, the better your chances of winning. 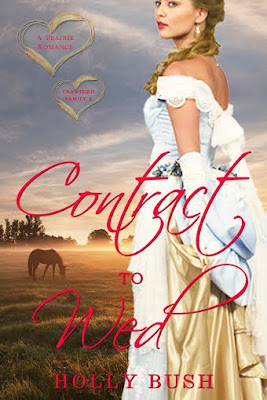 Jolene Crawford Crenshaw, heiress and Boston socialite, went from her family home directly to Landonmore upon her marriage, the mansion she shared with her handsome and charismatic husband. She’d never in her life worried in the slightest over anything as crass as the dollars required to maintain that home or the lifestyle she’d been born to. Her extensive yearly wardrobe, the stables and the prime horseflesh within it, even the solid silver forks and knifes that graced her table, were expected and required to maintain the social standing that she’d cultivated over the years. But suddenly she was a widow with little money and just her pride and her secrets to keep her upright.

Max Shelby made his fortune in oil wells and cattle, but lost the love of his life the day his wife died. Now, his happy, carefree daughter needs instruction and guidance as she grows into a young lady and his dream of becoming a Senator from his adopted state of Texas seems out of reach with few political or social connections. The right wife would solve both problems. As it happens, his sister knows of a woman, a recent widow, charming, beautiful and socially astute, but in reduced circumstances, who may want to begin again. Max signed the wedding contract sight unseen.

Will Jolene be able to shed her sorrows, anger and fears to begin anew away from the censure and hidden tragedy that marred her life? Is her new husband, confident, strong and capable Max Shelby, the man, the only man, to see past her masks to find the woman beneath?

Max walked slowly to where a woman, dressed in black, was directing several porters stacking multiple trunks and luggage. It was a detail he’d not thought of. He turned to the depot manager who was watching the porters himself.

“Can you get word to the Shaw Brothers to get over here with one of their wagons?”

The manager nodded and hurried to his depot, and Max turned back. Apparently finished, four porters stood behind rows and stacks of luggage and trunks, staring up at the train. The woman dressed in black was waiting, and the conductor stood to the side of the metal steps between the cars and lifted his hand up. At the top of those three steps appeared a tall, slender woman. She was dressed from head to toe in the palest blue, starting with the tilted, wide-brimmed hat, to her jacket trimmed in black roping to her bustled skirts. She extended a foot shod in a pale blue satin slipper and accepted the conductor’s outstretched hand.

At first glance, she was stunning and sophisticated and sure of herself. And he was certain she was his wife. He walked to her and held out his hand.

He bowed his head and touched his hat. “At your service, ma’am.”

She put a gloved hand in his, and he was immediately aware of her. He could smell a musky rose scent and felt the pressure of her hand in his as she came down the last two steps. 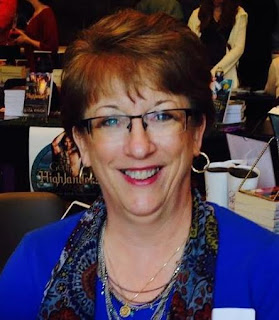 Holly Bush writes historical romance set on the American Prairie, in Victorian England, and recently released her first Women’s Fiction title. Her books are described as emotional, with heartfelt, sexy romance. She makes her home with her husband in Lancaster County, Pennsylvania.  Connect with Holly at www.hollybushbooks.com and on Twitter @hollybushbooks and on Facebook at Holly Bush.

When I was a young reader I fell in love with historical romance novels and imagined myself as the heroine of every story and while my tastes have grown and changed over the years, when I need a chance of pace I find myself picking up a historical novel because it’s a genre I still love reading.  Having read several books by Holly Bush, I jumped at the chance to read and review Contract to Wed, the second book in her Crawford Family Series.  While it’s a book you can enjoy on its own, I personally recommend you start with Train Station Bride first.

A member of Boston’s high society, Jolene Crawford Crenshaw leads a life many women would envy; a rich husband, several beautiful homes, the latest fashions and everything money can buy.  All of that changes when Jolene’s husband suddenly dies and leaves most of his estate to someone other than his wife.  A widow with a vastly reduced bank account, Jolene clings to her pride and secrets as she trys to figure out how she’s going to get by.  And then she receives an unusual offer.  An offer of marriage, sight unseen, to Max Shelby, a wealthy Texas widower, willing to pay for a wife to help him, and his daughter, enter society and help him achieve his dream of becoming a Senator.  Agreeing to leave Boston, Jolene heads to Texas for what will become the biggest adventure of her life.

Ms. Bush does an excellent job developing both leading characters; while I had a harder time connecting with Jolene, who was aloof and socially stuck up, I easily connected with Max and his daughter Melinda.  I liked everything about their life in Texas and how they got along with the people who lived and worked on his ranch.  While it was clear that both Max and Melinda needed a good “polishing” to enter society, and that Jolene was more than capable of doing that, it was also clear that Jolene needed them in order to become the best she could be.  Ms.. Bush addresses Jolene’s cool and aloof manner by letting us glimpse Jolene’s past through her memories.  I also liked that both Jolene and Max had both experienced grief in their lives as it gave them a common foothold to build on.

The secondary characters are also well developed and I especially enjoyed getting to know Alice, Jolene’s personal maid, and the people who worked on ranch for Max.  I especially liked his cook Maria and his ranch manager Zeb.  The romance between Jolene and Max iis well developed, not rushed, and I enjoyed watching them get to know each other as the physical attraction between them builds.  I also enjoyed getting to know Melinda, Max’s daughter, who is much younger than Jolene was first led to believe.  She becomes the first person to both physically and emotionally reach Jolene.

Will Jolene and Max’s contract to wed turn into the love of a lifetime?  Will Jolene learn to let go of the past and embrace what the future holds? You’ll have to read Contract to Wed to find out, I enjoyed it and look forward to reading the next book in this series to see what happens to the next Crawford bride.

a Rafflecopter giveaway
FTC Disclosure:  I received a complimentary copy of this book as a part of a book tour for a fair and honest review which in no way influenced my opinion of the reading material provided
Posted by Maria at Tuesday, November 03, 2015