Welcome to my stop on the Pre-Release Blitz, presented by Tasty Book Tours, for Coming Apart at the Seams by Jenna Sutton.  Please leave a comment or question for Jenna to let her know you stopped by.  You may enter her tour wide giveaway, where Jenna will award a Kindle Fire HD 7” and a Kindle eBook of All the Right Places to one (1) randomly chosen commenter, by filling out the Rafflecopter form below. 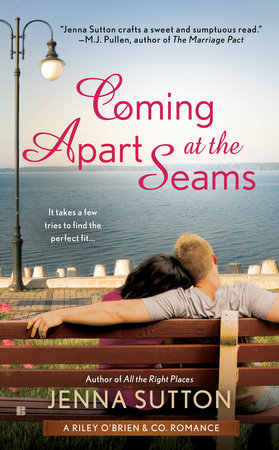 Love can take some time to break in...

Teagan O’Brien, heiress to the Riley O’Brien & Co. denim empire, is anything but a spoiled rich girl. She’s worked hard to secure her place in the family business and can hold her own, in and out of the office. Only one man has ever been able to get under her skin—sexy football star Nick Priest. Years ago they crossed the line from friends to lovers, but he left her heartbroken. Since then, she’s been determined to keep him at arm’s length—no matter how tempting he looks in his jeans...

Nick has fortune, fame, and looks that make most women hot and bothered. But he doesn't have the woman he really wants. He knows he screwed up when he walked away from Teagan, and now that he has a second chance, he’ll do whatever it takes to win her over—no matter how tongue-tied he gets...

He told himself he was way too interested in what she’d been doing, but that didn’t stop him from leaning forward to hear her response. She nodded, but surprisingly she didn’t elaborate. He narrowed his eyes. Was she purposely not telling him what she’d done last night?

The coffeemaker beeped, and Teagan pushed away from the counter without answering. She opened the cabinet, pulled out two mugs, and filled them with coffee.

Grabbing some half-and-half from the fridge, she splashed a generous amount in his mug, just as he liked it. She dumped a huge amount of sugar into her coffee, and he shuddered at the thought of how sweet it would be.

She placed his mug in front of him before picking up hers. She gazed at him over the rim of it as she blew on her coffee.

“So, you’re bored,” she stated flatly. “You’re desperate for company, and you want to do something touristy today.”

She took a small sip of her coffee, waiting for his reply.

“Right,” he answered, although he wasn’t being entirely truthful.

He wasn’t desperate for company. He knew other people in the city now. In fact, he knew more than a few in the biblical sense. And he definitely wasn’t bored. How could he be when he spent so much time with Teagan?

“What do you have in mind?” she asked, pushing her tangled hair away from her face.

She stared at him, an unreadable expression on her pretty face. When she didn’t respond, his stomach cramped a little at the thought that she might not want to go with him. The outing wouldn’t be any fun without her.

After a long moment, Teagan nodded and left him in the kitchen, presumably to get ready. As he raised his mug and took a drink, he realized two things: he didn’t like her coffee, and he didn’t want to spend his free time with anyone but her. 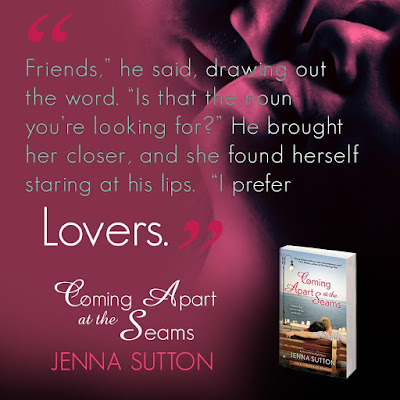 Jenna Sutton spent most of her career as an award-winning journalist covering business-related topics including healthcare, commercial real estate, retail, and technology. Nowadays she writes about hot, lovable guys and the smart, sexy women who make them crazy. It’s the culmination of a lifelong dream, and she feels so lucky to be able to do it.

Jenna and her husband live in a 103-year-old house in Texas.