Welcome to my stop on the Virtual Tour, hosted by France Book Tours, for Flambe in Armagnac by Jean-Pierre Aloux and Noel Balen.  Please leave a comment or question for the author to let them know you stopped by.  You can enter the tour wide giveaway by filling out the Rafflecopter form bellow.  You can also follow the rest of their tour by clicking on the banner above. 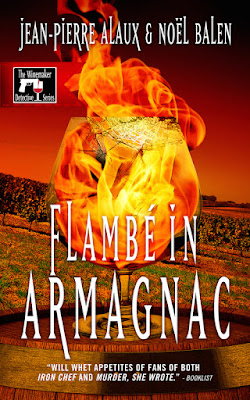 A small town holds fiercely onto its secrets.

In the heart of Gascony, a fire ravages the warehouse of one of Armagnac’s top estates, killing the master distiller. Wine expert Benjamin Cooker is called in to estimate the value of the losses. But Cooker and his assistant Virgile want to know more.

How did the old alembic explode? Was it really an accident? Why is the estate owner Baron de Castayrac penniless? How legal are his dealings? The deeper the Winemaker Detective digs, the more suspicious characters he uncovers. There is more than one disgruntled inhabitant in this small town.

As we witness the time-honored process of Armagnac distillation and the day-to-day activities of the hunt, the market place, and the struggle for power and duck confit, we get a glimpse of the traditions of southwestern France where this mystery of possible arson and murder lies below the surface.

An episode in a long successful French mysteries series that is a hit television series (Le Sang de la Vigne) now in its fourth season and attracting an audience of over 4 million.  The series is a huge success in France, Belgium and Switzerland.  I've attached a  peak of an episode for the 2015 season featuring Benjamin Cooker as played by Pierre Arditti.

Jean-Pierre Alaux is a magazine, radio and TV journalist when he is not writing novels in southwestern France.  He is the grandson of a winemaker and exhibits a real passion for wine and winemaking.

For him, there is no greater common denominator than wine.

He gets a sparkle in his eye when he talks about the Winemaker Detective,
which he coauthors with Noël Balen.

Noël Balen lives in Paris, where he shares his time between writing, making records, and lecturing on music.  He plays bass, is a music critic and has authored a number of books about musicians in addition to his novel and short-story writing.

A fan of the Winemaker Detective series by Jean-Pierre Aloux and Noel Balen, I could not wait to dive into Flambé in Armagnac, the latest installment in the series released by Le French Book.  Set in the Gascony, a region Southwest of Paris, this installment features both main characters, wine expert Benjamin Cooker and his trusty assistant Virgile Lanssien and a handful of colorful secondary characters.  Showcasing their personal knowledge of French wine, French cuisine and the French countryside, this is a cozy series no Francophile will want to miss.

Mr. Aloux and Mr. Balen do a very good job introducing the reader to both Benjamin and Virgile at the beginning of this installment so if you haven’t had a chance to read any of the other books in the series, you will not be lost or confused in the story.   Having just completed the New Year celebrations, Benjamin receives a request from Protection Insurance to investigate wine losses at a private estate in Gascony.  A fire claimed the warehouse at one of Armagnac’s top estates and the insurance company needs a full accounting of the real value of the owner’s losses.  When Benjamin and Virgile begin their investigation, they quickly realize there is more to the fire than meets the eye, and begin to question everything they’ve been told about the estate, it’s wine holdings and it’s owners.

Written in third person narrative, this installment focuses on Benjamin’s vast knowledge of wine production and in his appreciation for fine French cooking.  We also get to continue to watch the evolving relationship between Benjamin and Virgile.  While Benjamin is clearly the more experienced and knowledgeable wine expert, Virgile is beginning to show how being his apprentice is going to pay off.  We also get to see a different side of Virgile as he discovers several clues all on his own.

The mystery of how the fire started and why the master distiller died in the fire is well developed and takes several interesting twists and turns.  The story’s pace is fairly quick and the secondary characters all add color and depth to the story.  Especially the owner of the estate, Baron de Castayrac, and his family.  I thought I knew who set the fire and why by once again, the authors surprised me at the end.

Will Benjamin and Virgile discover the truth about the fire?  How do Baron de Castayrac and his family scandals figure into the mystery of why the master distiller died in the fire?  Will Virgile be able to prove he’s ready for the next step in his training?  You’ll have to read Flambé in Armagnac to find out.  I enjoyed it and look forward to reading more books in this series.  While this is a series, each book can be read and enjoyed on its own.