Welcome to my stop on the Virtual Tour, presented by Goddess Fish Promotions, for the Year of Living Blonde by Andrea Simonne.  Please  leave a comment or question for Andrea to let her know you stopped by.  You can enter her tour wide giveaway, for a 420 Amazon/B&N GC, by filling out the Rafflecopter form below.  You can also follow the rest of the tour by clicking on the tour banner above.  The more stops you visit, the better your chances of winning. 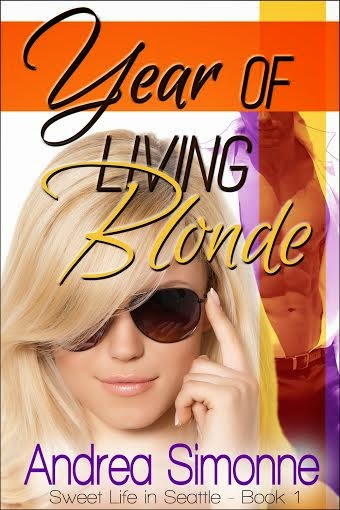 A funny and sizzling romp about discovering your inner pin-up girl...

Plain-Jane bakery owner Natalie Anderson has always followed the recipe for a safe life. When her husband dumps her for a seductive older woman, it’s time to throw out that recipe and start from scratch. She cooks up a plan to transform herself from mousy brown to sexy blonde. Meanwhile, she’s trying to expand her Seattle bakery, La Dolce Vita, but runs into an obstacle in the form of her irritatingly handsome landlord.

Astronomer Anthony Novello’s good looks and charm usually guarantees him a free pass with women, though that’s not the case with his new tenant, Natalie. Plain, plump, and persnickety—he’s never met a woman more annoying. But when Anthony returns from a telescope observing run, he makes a discovery of the non-celestial kind. Natalie has changed. He’s amazed to find himself attracted to her. Sparks fly as he tries to convince her there’s more to him than meets the eye.

However, when Natalie’s ex-husband decides to win her back, she’s forced to choose. Is her year of living blonde over? Or is this the start of a new and much sweeter life….

Natalie glances at the clock. It’s almost ten. Kind of late for visitors. Pausing the television, she goes over and peeks cautiously through the front window.

A bolt of lightning streaks through her.

Anthony is standing on her front porch. He’s wearing his motorcycle jacket and holding his black helmet at his side. The big bad wolf at her door.

She glances at herself in the hall mirror. No makeup and her hair a mess. Great.

He rings the bell again and she marches over, ready to take the offensive. Ready to tell him to go away. But when Natalie yanks open the door and sees the expression on his face, she hesitates.

He takes his time with his reply. “I needed to see you tonight.”

“It’s a long story.” He smiles, but there isn’t much humor in it.

She’s never seen Anthony like this before. He never looks anything less than perfect, but there’s strain on his face and around his eyes, and she suspects this is the real man

He takes a step toward her, lowering his voice. “Let me in, Natalie.”

Standing broad-shouldered and solemn in her doorway, he’s an imposing figure, but she isn’t afraid. Despite the fiasco with the bakery, she realizes she still trusts him.

Without a word, she steps out of the way to let him come inside.

The door closes and she walks back into the living room. There’s a sound and she sees that Anthony has dropped his motorcycle helmet on a chair.

“This is a bad idea,” Natalie tells him. “I don’t know why you came here. I shouldn’t even be talking to you.”

“I think you know exactly why I’m here.” His voice is low as it vibrates through the room.

“Because this isn’t about any of that.” For a moment, his eyes darken with regret, but then turn heated. “Whatever happens next is between you and me.”

Natalie shakes her head, but Anthony moves closer until he’s in right in front of her. She feels his hand on her cheek as the other cradles her head, gently holding her still. “Don’t,” he says, his tone imploring. “Don’t say no. Tell me to stay.” 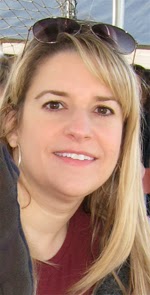 Andrea Simonne grew up as an army brat and discovered she had a talent for creating personas at each new school. The most memorable was a surfer chick named "Ace" who never touched a surf board in her life, but had an impressive collection of puka shell necklaces. Eventually she turned her imagination towards writing. Andrea still enjoys creating personas, though these days they occupy her books. She currently makes her home in the Pacific Northwest with her husband and two sons.

a Rafflecopter giveaway
Posted by Maria at Friday, February 27, 2015