Welcome to my stop on the Virtual Book Tour, presented by France Book Tours, for The City of Blood by Frederique Molay,  translated by Jeffrey Zuckerman.  Please leave a comment or question for Frederique to let her know you stopped by.  You can enter the tour wide giveaway by filling out the Rafflecopter form below.  You can also follow the rest of the tour by clicking on the tour banner above.

The Choice of a Hero by Frederique Molay

Frédérique Molay is an award-winner author of a series of police procedurals set in Paris and a master of suspense and detail. Her novels transport readers to the French capital, taking them behind the scenes with the city’s elite detectives. The 7th Woman is an international bestseller available in English from Le French Book. The second Paris Homicide mystery, Crossing the Line, came out in September 2014, and the third, The City of Blood, hits the bookstores on January 20, 2014. Here she shares some of the inspiration behind her central character, Chief of Police Nico Sirsky.

When an author chooses a hero in a novel, it is hard to distinguish what in that character comes from the author’s own life and what comes from other sources. What I can say is that I wanted the main character in the Paris Homicide series to head up the Paris Criminal Investigation Division. That became clear to me the day I met the actual man in that position, who necessarily inspired the character.

As a woman, writing a male character allows me to come across a little bit more incognito in the novels: nobody ever asks what I as a woman have in common with my male character. He could possibly be a woman’s ideal man, a man who understands woman as they are. I would add that he is also a little bit of a superhero, as I’ve always loved comic-book superheros.

I will also admit that when I wrote The 7th Woman, the first in the series, I had no idea I was starting a series. But when the book was a runaway bestseller in France, my readers asked for more about the characters, as if Nico Sirsky and his team were real, flesh and blood cops. It was incredible for me as a writer, and I set out to write the second in the series, Crossing the Line, and then the third, The City of Blood.

Today, Nico is part of my life and I’m happy about that. I hope that the adventure will continue for a long time, as long as readers are happy to read about Nico’s life and his investigations. 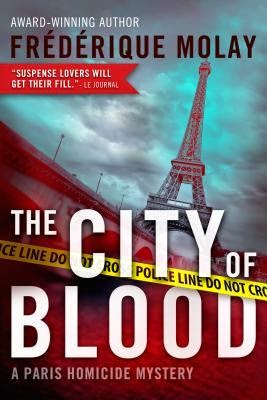 The City of Blood

When a major Parisian modern art event gets unexpected attention on live TV, Chief of Police Nico Sirsky and his team of elite crime fighters rush to La Villette park and museum complex. There, renowned artist Samuel Cassian is inaugurating the first archeological dig of modern art, twenty-seven years after burying the leftovers of a banquet.

In front of reporters from around the world, excavators uncover a skeleton. Could it be the artist’s own son? And does that death have anything to do with the current string of nightclub murders by the “Paris Butcher”?

On the site of the French capital’s former slaughterhouses, the investigation takes Nico and France’s top criminal investigation division from artists’ studios to autopsy theaters and nightclubs in hopes of tracking down the murderer who has turned this Paris park into a city of blood.

Secrets; we all have them.  Some are harmless, some might hurt others and some can get you killed.   The City of Blood, the third instalment in the Paris Homicide series, begins with the alarming discovery of a body buried within a famous artist’s time capsule.  A discovery that places Chief of Police, Nico Sirsky, and his Le Crim investigative team in front of the media once again.  Further developing the characters in her series, author Frederique Molay gives us another thrilling adventure as Nico tracks down a killer who has already killed once and begins killing again.

At the height of his career, performance artist Samuel Cassian hosted a dinner party at La Villette, a park in Paris.  His plan was to bury the remains of the party as a sort of time capsule to see how consumerism, and his art, would be viewed in the future.  Thirty years later as he and other important members of the French art world dig up the “artistic event”, a body is discovered among the remains.  As Nico and his team begin uncovering clues, a new set of murders begin occurring at the park and it becomes apparent the crimes are somehow connected.  Will Nico and his team be able to discover the identity of the “Paris Butcher”, as he or she has come to be called, before the body count gets out of control?

Ms. Molay does a fantastic job continuing to develop her characters; Nico is quite simply divine! He’s smart, sexy as all get out (just read the scene in the night club), a great dad and an incredible cop.  He’s also human and does have some flaws; he can become over emotional, he has a somewhat complicated personal life and he’s used to being in charge.  I really love this character and if he was real, I’d be headed to France so I could handcuff him to my side.  Ms. Molay also does a good job developing his team and I enjoyed getting to know what they experienced as they worked on this new case.

Ms. Molay always adds an additional element to her stories, which I personally enjoy, by giving Nico a personal issue on the side.  In this instalment we get to watch Nico, his sister Tanya, and Caroline, the woman in Nico’s life, as they deal with Anya’s, Nico’s mom, health.  We also get to spend a little bit of time with Dimitri, Nico’s teenaged son and learn a little bit about what it’s like in Paris hospital.

Will Nico and his team be able to solve a “cold” case that’s thirty years old?  Are the new murders really tied to the past or is the killer just advantage of a unique situation?  You’ll have to read The City of Blood to find out.  I really enjoyed it and can’t wait to read what Ms. Molay writes for us next.

FTC Disclosure:  I received a complimentary copy of this book from the Publisher via NetGalley as a part of a book tour for a fair and honest review.  I did not receive any additional compensation for my opinion of the reading material provided.

Called, “the French Michael Connelly,” Frédérique Molay graduated from France’s prestigious Science Po and began her career in politics and the French administration.  She worked as chief of staff for the deputy mayor of Saint-Germain-en-Laye, and then was elected to the local government in Saône-et-Loire.

Meanwhile, she spent her nights pursing a passion for writing she had nourished since she wrote her first novel at the age of eleven.  The first in the Paris Homicide series, The 7th Woman, won France’s most prestigious crime fiction award and went on to become an international bestseller,

allowing Molay to dedicate her life to writing and raising her three children.

Sign up to receive their latest news and deals

Buy the book | on Amazon | on Barnes & Noble | on Indiebound

Jeffrey Zuckerman was born in the Midwest and lives in New York. He has worked as an editorial assistant, a lifeguard, and a psychology researcher. Now an editor for Music and Literature Magazine, he also freelances for several companies, ranging from the pharmaceutical industry to old-fashioned book publishing. He holds a degree in English with honors from Yale University, where he studied English literature, creative writing, and translation.