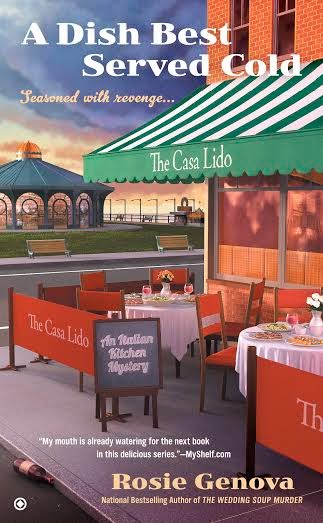 At the Casa Lido, the end of summer means a party, and hit whodunit writer Victoria “Vic” Rienzi and her family are cooking like crazy for the restaurant’s seventieth anniversary celebration. As they chop onions and garlic, old family friend Pete Petrocelli stops by, saying he knows something that would make for a good mystery novel. Curious, Vic asks Nonna to elaborate on Pete’s claim and learns of a relative who mysteriously disappeared back in Italy…

The night of the party brings a crowd—and a full throttle hurricane. When the storm finally passes, everyone thinks they’re in the clear—until the first casualty is found, and it’s Pete. Remembering his visit, Vic isn’t certain Pete’s death was an accident and decides to dig deeper into his story. What she finds is meatier than Nonna’s sauce…

Praise for the Italian Kitchen Mysteries:

“More twists in it than a bowl of rotini.”—Suspense Magazine

“My mouth is already watering for the next book in this delicious series.”—Myshelf.com

A Jersey girl born and bred, national bestselling author Rosie Genova left her heart at the shore, which serves as the setting for much of her work. The atmosphere of the Jersey shore is present in the details, whether it’s the smell of the sea, the sound of a Springsteen song, or the taste of Kohr’s custard from the boardwalk. And no summer is complete unless she has sand in her shoes.

A bookworm from the time she could sound out words, Rosie spent many happy hours in her home town library where she hid behind the stacks reading the titles she was too young to check out. She earned two degrees in English from Rutgers University, where she discovered to her delight that reading Jane Austen was actually considered homework.
Though she’s always considered herself a writer, she didn’t pen her first novel until ten years ago, and she hasn’t stopped since.

Her series, the Italian Kitchen Mysteries, is informed by her deep appreciation for good food, her pride in her heritage, and her love of classic mysteries, from Nancy Drew to Miss Marple. Her debut novel, Murder and Marinara, was named a Best Cozy of 2013 by Suspense Magazine and was a finalist for a 2014 Daphne Du Maurier Award. An English teacher by day and novelist by night, Rosie also writes women’s fiction as Rosemary DiBattista. She still lives in her home state with her husband and her youngest son.