Welcome to my stop on the Virtual Book Tour, presented by France Book Tours, for The Shiro Project by David Khara.  Please leave a comment or question for David to let him know that you stopped by.  You can enter the tour wide giveaway by filling out the Giveaway form below.  You can also follow the rest of the tour by clicking on the banner above.  The more stops you visit, the better your odds of winning.  In this post I have inserted the review for The Bleiberg Project - Mr. Khara's first book in the series, I will be posting the review for The Shiro Project tomorrow.

A GAME OF MASKS by David Khara

French author David Khara, a former journalist, top-level sportsman, and entrepreneur, is a full-time writer. Khara wrote his first novel—a vampire thriller—in 2010, before starting his Consortium thriller series, which offers a roller-coaster ride that dips into the history of World War II, rushing back to present day with a loop-to-loop of action and humor. The Bleiberg Project was an instant success when it was first released, and The Shiro Project just came out in English, published by mystery and thriller publisher Le French Book. The third book in the series, The Morgenstern Project is scheduled for release in English spring 2015.

In The Bleiberg Project, I had a lot of fun introducing Eytan’s character as a threat and then let the readers realize by the middle of the book that he was the actual hero. With The Shiro Project, I wanted to write a more personal story, thus enabling the readers to learn more about Eytan—about his values, his own story, and his life nowadays when not on a mission. I love the idea that there is more to see about all of us than meets the eye. One-dimensional characters do not interest me. Maybe this comes from the fact that most people stick to what their eyes tell them, and it frightens me. I can’t talk to someone without trying to figure out what he or she is trying to hide, and why. How many easy talking people are actually shy underneath? Others look cold and distant because they are afraid somebody might spot their weaknesses.

Life is a game of masks. Getting rid of our own mask requires strength and willpower, but once you put if off, you’re on your way to freedom, you can be who you truly are. Eytan can’t. That’s the whole thing about him. Eytan is a 10-year-old boy stuck in a giant’s body. And not just any 10-year-old boy, but one who saw his brother being shot by an SS guard. One who lost his parents in the Warsaw ghetto. One who was tortured every day for a whole year. One who was transformed into something he was never meant to be. One who is doomed to lose every one he’ll ever love.

Eytan is all masks and lies. In The Bleiberg Project, when Jeremy sees him as a hero, Eytan answers that he is not a hero, just a killer. And, of course, he lies, for he will take a beating for those he considers innocent. He’ll take the bullet to protect them. The most important thing about him is that his hands are covered with blood so no one else’s will be.

To understand Eytan, you need to focus on his actions, not his words. And in The Shiro Project, he acts a lot, showing the whole range not only of his skills, but of his feelings. Stuck between a thirst for revenge and a very strict code of honor, he has to team up with a truly ruthless killer. Elena, who he met in The Bleiberg Project, is his exact opposite. Eytan values life, she doesn’t. He has high moral standards, she has none. Or so it seems… Having them fight against each other and finally teaming up for a common goal was not only fun to imagine, but also a good way to let the readers know more about these two uncommon characters. Elena has her reasons to behave as she does, and in some way, they are close to Eytan’s. Thus I could show two sides of the same coin. Two fates depending on a simple choice. Once again, how thin the difference is between good and evil. 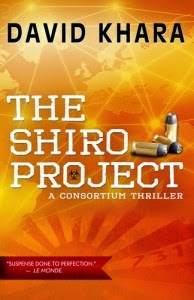 by David Khara
(translated by Sophie Weiner)
A Consortium Thriller

When yesterday’s enemies become today’s best allies and when mankind seems on the verge of repeating the errors of the past, what can a lone man do against the madness that is bound to follow?

After his mentor is kidnapped, a Mossad agent teams up with his worst foe, but first must face himself. He is enlisted against his will in a fight that’s not his own and takes him from present-day Czech Republic to past Manchuria. He has to put an end to the activities of a mysterious group who have gotten their hands on weapons of mass destruction.

What do Japanese war camps, US Army research and an annihilated modern-day Czech village all have in common?

Warning:  The book contains some violence 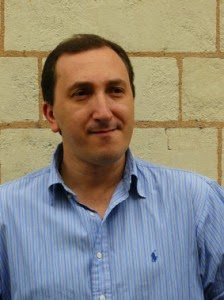 French author David Khara, a former reporter, top-level sportsman, and entrepreneur, has always been a writer.  After studying law, he stepped into journalism working for Agence France Press, and then became creative director for several advertising companies.

He loves new technologies and started his own company at the age of twenty-four, becoming an online business pioneer for French industries.

He then focused his life on writing fiction.  In 2010, he published The Bleiberg Project, which became an immediate success in France.

David Khara is also an accomplished athlete in fencing and rubgy, and he even played football as a linebacker.  He acknowledges that his culture is a much American as it is French, since he spent a lot of time in West Virginia and Manhattan, and is an avid fan of writers such as Dennis Lehane.

Sophie Weiner is a freelance translator and book publishing assistant from Baltimore, Maryland. After earning degrees in French from Bucknell University and New York University, Sophie went on to complete a master’s in literary translation from the Sorbonne, where she focused her thesis on translating wordplay in works by Oulipo authors. She has translated and written for web-based companies dedicated to art, cinema, and fashion as well as for nonprofit organizations. Growing up with Babar, Madeline, and The Little Prince, Sophie was bitten by the Francophile bug at an early age, and is fortunate enough to have lived in Paris, Lille, and the Loire Valley.

A thriller which takes readers between the present and World War II, The Bleiberg Project by David Khara, is simply “Magnifique”.  Colorful characters, good dialogue and a conspiracy dating back to World War II, kept me turning the pages from start to finish.  Filled with action, danger, the nature of man’s humanity, or lack thereof, and the possible redemption of a tortured soul, Mr. Khara’s book is in my opinion a must read for any reader who enjoys this genre.

Beginning with a scene from World War II, Mr. Khara takes us to present day Manhattan, where he introduces us to Jeremy Corbin, aka Jay Novacek, a privileged, successful Wall Street Trader.  Who it just so happens is waking up from another night of drinking and womanizing.  Showcasing Jay’s currently less than stellar attitude towards life, and his job, Mr. Khara quickly lets us know that nothing is quite as it seems.  The pace picks up as Jay learns of his estranged father’s death, his father’s secrets and the part his mother played in keeping him in the dark.

Mr. Khara does a great job developing Jay’s character from the start; while difficult to like at first, I was able to quickly connect with him and understand his situation.  I understood why he changed his name from Corbin to Novacek and why he felt the way he did towards his dad.  Suffering from issues of his own, Jay is a tortured man who is not at peace with life but can’t bring himself to end it either.

As the story progresses and Jay finds himself trying to put together the clues his father left him, he is helped by two people who work for the CIA and have a vested interest in what he discovers.  Also aided by Eytan Morg, a “giant” bald headed man and a Mossad agent who at first seems to be out to hurt him, Jay flies to Europe to open a safety deposit box his father left him.  As their journey progresses, and Jay and the agents helping him take control of his father’s files, they find themselves being pursued by enemy agents and in danger of losing their lives.

Will Jay and his protectors uncover the truth about the “Bleiberg Consortium” and its ties to the Nazi’s?  Has the consortium behind Hitler’s rise to power continued to plan and experiment in preparation to “reshape” the world once again? You’ll have to read The Bleiberg Consortium to find out.  I loved it and can’t wait to read the next book in this series.

My Rating:  5 Out of 5 Crowns and a Recommended Read


FTC Disclosure:  I received a complimentary copy of this book from the publisher via NetGalley for the purpose of review.  I did not receive any compensation for my opinion of the reading material provided.
Posted by Maria at Monday, November 10, 2014