Welcome to my stop on the Virtual Book Tour, presented by Pump Up Your Book, for Blamed by Edie Harris.  Please leave a comment or question for Edie to let her know you stopped by.  You can enter her tour wide giveaway, for one digital copy of Blamed (formats available: PDF & ePub), ‘I Only Kiss Spies’ t-shirt, ‘Lincoln Park After Dark’ OPI nail polish and one bag of Van Houtte ‘Belgian Chocolate’ ground coffee, by filling out the Rafflecopter form below.  You can also follow the rest of the tour by clicking on the banner above.  The more stops you visit, the better your odds of winning.  My review is running late but will be posted within the next 48 hours. 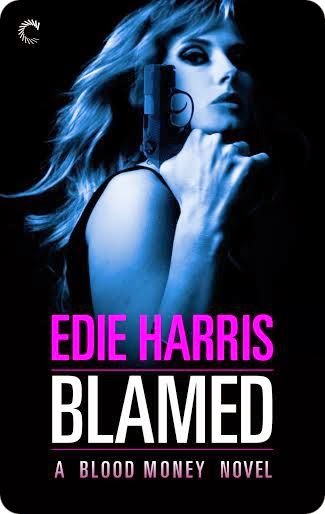 Born into a long line of spies, sanctioned killers and covert weapons developers, Beth Faraday carried out her first hit-for-hire when she was still a teenager.

That part of her life—the American spy royalty part—ended one year ago, with a job gone wrong in Afghanistan. The collateral damage she caused with a single shot was unfathomable and, for Beth, unforgiveable. She’s worked hard to build a new life for herself, far away from the family business. But someone, somewhere, hasn’t forgotten what Beth did in Kabul. And they want revenge.

As the Faraday clan bands together to defend Beth and protect their legacy, Beth is forced to flee her new home with the unlikeliest of allies—MI6 agent Raleigh Vick, the only man she’s ever loved. And the one she thought she’d killed in the desert.

The blood in her mouth tasted like hot pennies.

Flinching as a secondary arterial spray lashed her face, she kept her fingers clenched in her tormenter’s hair, holding his head aloft for the slice of the blade she’d stolen from his toolkit when his back was turned.

That mistake had just cost him his life.

Her stomach lurched, and she shoved the dead man away, wishing he’d deafened her when he boxed her ears on the second—third?—day, so she couldn’t hear the back of his skull hit the concrete floor with a sickening thwack. Her hand shook, the knife threatening to slip from her mangled fingers, but once it fell, she knew she wouldn’t be able to pick it back up, and she couldn’t afford to be weaponless. Injured knuckles white around the slick rubber grip, she staggered back until her shoulders hit the far wall of her prison.

The blood cooling on her face ratcheted her panic up a notch. Every breath was pure agony, broken ribs prodding like iron pokers against her lungs. Every square inch of skin on her back burned like hellfire. Her body was one giant bruise, her mind a tangled mess. Tears spilled down her cheeks, wet and warm—and silent.

She’d not made a sound when she slit her captor’s throat. Her family would be so proud.

The thought made her tears fall faster. A longing for home and the Queen Anne Victorian in which she’d grown up, the same longing she had buried deep for the past year, threatened to bring her to her knees, but no. No. It was just like the knife—if she fell, she’d never get back up, and eventually, someone was going to come looking for the man she had killed.

John. He’d told her his name was John, but surely that was a lie. Monsters never told the truth.

Swallowing her nausea, she stumbled toward John’s crumpled body. The thick pool of blood was unavoidable, though she shuddered when red seeped between her bare toes. Dizziness swamped her when she dropped into a crouch, the hand not holding the blade searching the pockets of John’s cargos for his key card.

Her victory upon locating the card was short-lived when she remembered what came next.

Each time John had “visited” her, it had become harder and harder to stay conscious. Everything in her hurt as she’d never hurt before. The temptation to let her eyes slide shut forever had been so strong, John singing soothingly while he disinfected his tools from their session.

Lullabies. He sang her lullabies. Rock-a-bye baby, on the tree top….
She had always remained awake long enough to watch him leave, knowing he’d be back to resume her torture. The key card was merely half the equation when it came to unlocking the door. John’s fingerprint was the other.

When the wind blows, the cradle will rock….

Dragging John’s body to the scanner mounted next to the door was not an option, not in her weakened state. Her gaze caught on his limp hand, and a tremor wracked her. There was no choice. Flattening his palm against the bloody floor, she lowered the knife.

When the bough breaks, the cradle will fall….

She couldn’t help it—she vomited. But when her retching ceased, she gingerly picked up the severed finger and rose from her crouch. She almost didn’t feel the wetness underfoot anymore, which meant blessed numbness had nearly arrived. Key card first, then the bloody print on the scanner’s screen, and she held her breath.

And down will come baby, cradle and—

The near-silent snick of the steel door unlatching shook John’s voice from her head. Freedom. Oh, God, freedom from this hellhole was so close, so amazingly close she was dizzy with it.

Her tears fell harder. Fuck. Why couldn’t she stop crying?

With a soft whirring noise, the door slid open, and a bunker-style hallway cast in eerie greenish light was revealed. She was underground, as suspected. A memory flashed, of John using a medical scalpel to dig the GPS tracker out from behind her ear. There had been nothing clinical or precise in how he’d wielded that blade.

Can’t have them finding you before we’re done here, little girl.

She didn’t bother looking back at his lifeless form as she eased through the door, still clutching his finger and key card. They might still prove useful in helping her escape this prison; John would not.  Adjusting her grip on the knife, she crept down the hall, ignoring the black spots clouding her vision and the vicious pounding of her head. It felt as though her brain were trying to punch its way through her skull, and she simply didn’t have time for that nonsense, because someone was watching her. Her hazy thoughts pictured the camera mounted in the corner of her cell, its little red dot blinking, always blinking. Someone would know what she’d done to John, and she refused to wait for retaliation to find her.

The concrete was cold beneath her sticky, blood-soaked feet, with a chill that crept up her ankles, her calves, making her knees knock together. She was so tired. It had been at least a day since John had given her anything to drink, and he’d never provided food. As she slowly made her way down the empty corridor, her senses began to fail her, the muted buzz in her ears blocking out the faint echo of her rasping breaths. Her adrenaline rush from the kill was over.

Perhaps…perhaps she wouldn’t make it out of here, after all.  A loud sob escaped against her will.

The sounds of footsteps, heavy and booted, broke through the encroaching deafness, and then there he stood in front of her, limned in the faint glow of the bunker lights, a tall man with ice for eyes and a nasty-looking gun.

She blinked at him through her tears, her relief short-lived as a wave of bitterness sweeping through her battered body as she saw where, precisely, that gun was aimed.

Her voice cracked, breaking low and hoarse when she spoke. “Shot through the heart, and you’re to blame.”

She hummed the rest.

You give love a bad name. 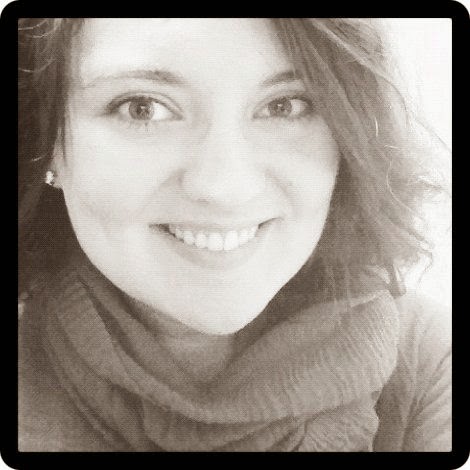 Edie Harris studied English and Creative Writing at the University of Iowa and Grinnell College. She fills her days with writing and editing contract proposals, but her nights belong to the world of romance fiction. Edie lives and works in Chicago and is represented by Laura Bradford of Bradford Literary Agency.

Her latest book is the romantic suspense/espionage, Blamed. 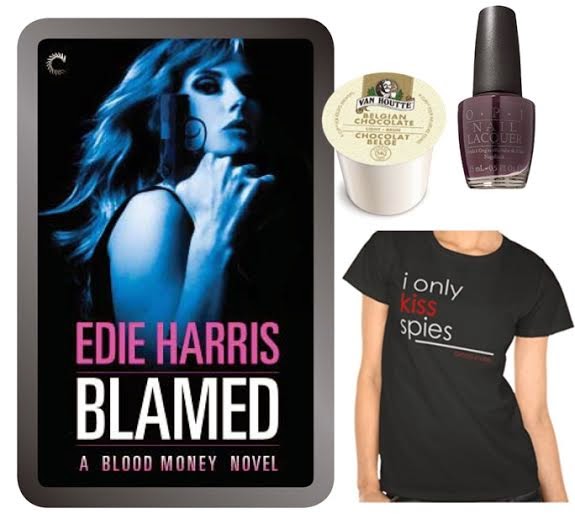 a Rafflecopter giveaway
Posted by Maria at Tuesday, November 11, 2014