Welcome to my stop on the Name Before the Masses Book Tour, presented by Goddess Fish Promotions, for A Darker Rain by Claudine Kapel.  Please leave a comment or question for Claudine to let her know you stopped by.  You can enter her tour wide giveaway, for a $20 Amazon GC, by filling out the Rafflecopter form below.  You must comment to enter the Rafflecopter.  You can also follow the rest of Claudine’s tour here, the more stops you visit, the better your odds of winning.

Maria:  "A Darker Rain" is your first published book.  How has becoming a published author changed your viewpoint as a reader and author?

Claudine:  Going through the publishing process has made me more aware of how other authors organize their books, including how they open and close chapters, how they integrate different perspectives, and whether they use many short chapters or fewer longer chapters to advance the story.

I now also take more notice of the visual elements of a book, including the font, the spacing, and how indents are used, as well as the kinds of details that are incorporated into the design of the cover.

As both a reader and an author, I can now better appreciate the attention to detail that is required to produce a good book.

Maria:  What drew/influenced you to write an action adventure/science fiction series? Why a male protagonist?

Claudine:  I’ve always enjoyed action-adventure and science fiction novels, so that likely helped inspire the series. As for the protagonist – Ryan Cole simply emerged as the hero of the story. I didn’t have an upfront intention with respect to whether the protagonist should be male or female.

Maria:  How many books are you planning in the Ryan Cole series and will we be seeing recurring secondary characters?

Claudine:  I don’t have any specific plans regarding the number of books that will be in the series. The second book is scheduled for release in late 2014. I’m currently writing the third book and have ideas for books that come later in the series. My intent is to keep the series going for as long as there are stories to be told.

Maria:  What is a typical writing day for you since you also work as a consultant?

Claudine:  Because I work full-time, my book-related writing tends to unfold during evenings and weekends. Because I have my own business, there’s some flexibility in my work schedule, which helps when dealing with deadlines. I strive to do something book-related almost every day, although that includes non-writing activities such as marketing and website development, as well as writing and editing.

Maria:  Is there a writing sub-genre you just can't wait to want to try but haven't had a chance to dig into yet?

Claudine:  There are a few genres I’d like to explore over time. I love a good mystery – and that element is present in A Darker Rain – but I may also look at writing a more traditional mystery novel. In addition, I’m also giving thought to romance, as well as to more traditional science fiction where the action unfolds somewhere other than Earth.

Maria:  Who was your favorite author to read as a child? Teen? Young Woman?

Claudine:  As a child, I loved the Nancy Drew series by Carolyn Keene. As a teen, I was into action-adventure novels and spy thrillers, and particularly enjoyed the work of Alistair MacLean. Over time, my interests broadened to include a variety of genres and authors, as well as non-fiction works.

Quick Get to Know Claudine Questions:

Summer movie you most want to see? – Nothing on the summer list, but two recent releases I have on my list to see, perhaps on DVD, include Jack Ryan: Shadow Recruit and The Grand Budapest Hotel

Book you are most looking forward to read? – There’s no key book; I’m a voracious reader, so I generally have a few books on the go and I’m always on the hunt for something new and interesting

Coffee, Tea or something else? – Herbal teas are my favorite, especially strawberry 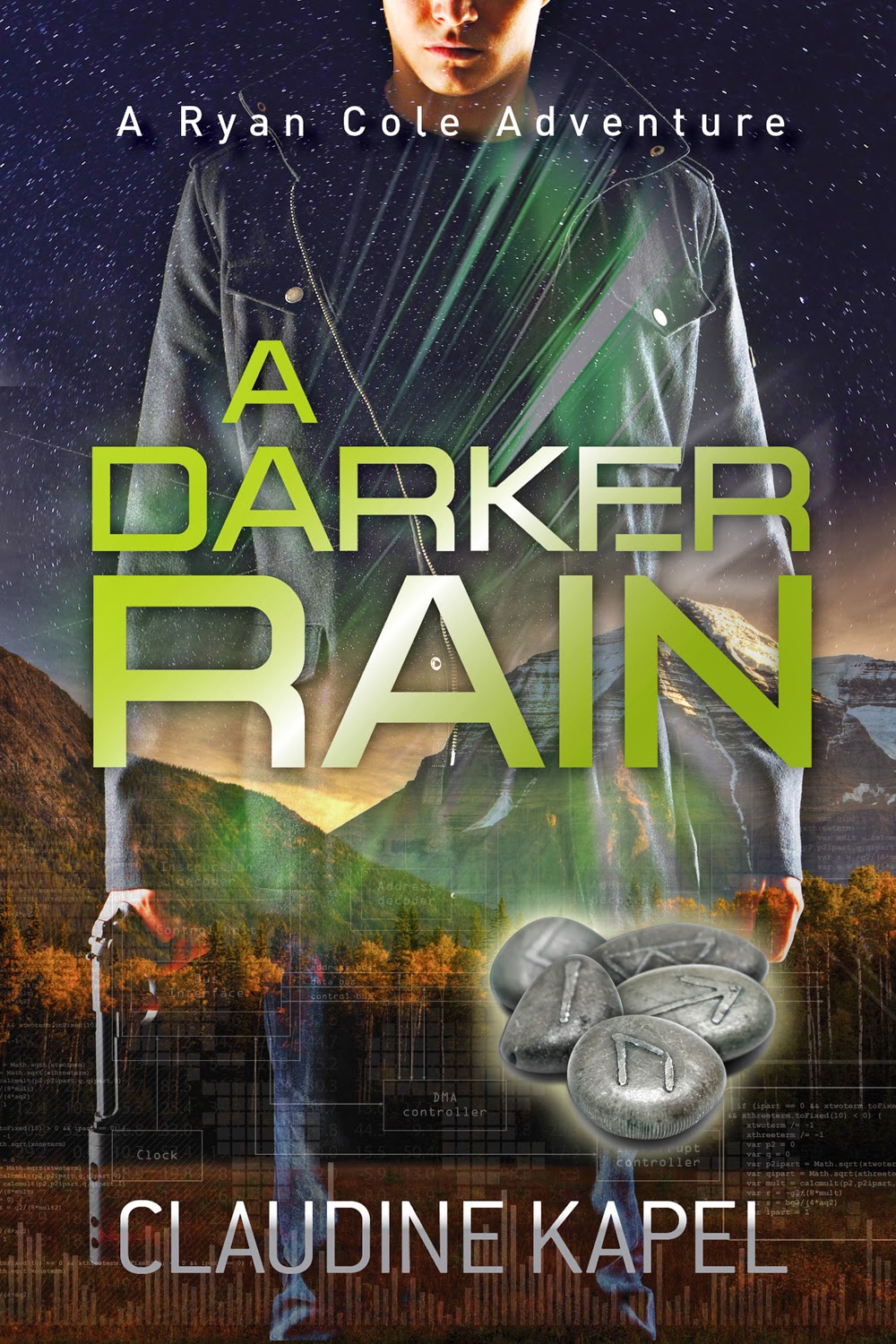 “It’s definitely not a good time to be going into the woods of Hawkley Ridge.”

When a red-eyed wildcat starts threatening ranchers in the Pacific Northwest, Ryan Cole recognizes the danger is far more menacing than the ranchers realize. Cole specializes in tackling unconventional security threats, particularly those with alien origins.

His investigation puts him in the crosshairs of Antoine Drake, an international arms dealer with a penchant for weapons from other worlds. Both men are hot on the trail of powerful alien artifacts known as guardian stones.

Cole and his team of investigators embark on a dangerous quest to recover the guardian stones before they can be assembled into the ultimate alien weapon. To succeed, Cole must also decipher the wildcat’s deadly secrets.

But in the woods of Hawkley Ridge, it’s easy for the hunter to become the prey.

A Darker Rain is the first book in the Ryan Cole series.

Beecham exhaled sharply. “Antoine Drake and Cassandra Chase are ruthless. They’ll stop at nothing to get what they want. If they’re acquiring both alien weapons and alien allies, that could give them a major military advantage. Who knows how powerful these weapons are or what they can do? We don’t even know how they work.”

“So what did your people learn about the weapons before they were stolen?” asked Cole. “Did Ivan Johnson shed any light on how the sonic rifle works before he was killed?”

Beecham rubbed his eyes wearily. “He didn’t give us a hell of a lot. We tested the alloy the rifles were made of and confirmed there’s no match for such a substance anywhere on Earth. But beyond that, we didn’t learn much.

“We ran a whole battery of tests to see if we could uncover the mechanics of the weapon. But nothing. No one has been able to figure out how the rifles operate. As you can see in the photo—not to mention in the files your buddy Ashcroft downloaded—there’s no visible trigger.”

Beecham looked at Cole, his face etched with deep concern. “We need to get these weapons back. And we need to stop Drake.”

Cole looked at Beecham with a frown. He had heard that refrain before, and it had been a prelude to disaster.

A Darker Rain is Claudine Kapel’s first novel. She lives in Toronto and enjoys books, music, and travel. When not working as a consultant, she can be found writing, reading, or contemplating what else may be out there.

The second book in the Ryan Cole series is planned for release in 2014.

Claudine loves to hear from readers. You can reach her at www.claudinekapel.com.