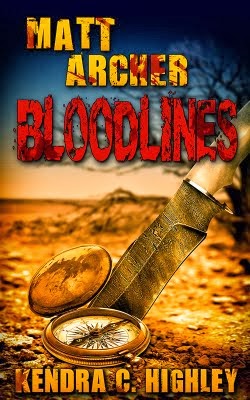 When seventeen-year-old Matt Archer set out on his last mission in the Australian Outback, he thought it would be like every other hunt.

After only two days on the ground, his best friend is possessed, a long-lost family member has returned and hidden truths have come to the surface. Add in a coven of witches bent on bringing about the end of the world and, well, this trip has started to suck.

As his power and strength continue to grow, so does Matt’s concern that he’s becoming more and more like the creatures he’s been charged to hunt: a monster.

Faced with some of his biggest challenges to date, Matt has to decide what he needs to protect most—his family, his team…or himself.

When I was fourteen, I picked up a knife and started a fight that was named mine long before I was born.

When I was fifteen, I was forced into a war against creatures the rest of humankind should never know about—and they won’t if I have anything to do about it.

When I was sixteen, I became a slave to my destiny, and the spirits who guided it.

Now I’m seventeen, and the fault, a man once said, is not in our stars, but in ourselves. Or in my case, my blood. Which is why I was chosen. And why I have to fight.

My name is Matt Archer. And I am my father’s son.

“I’ll kill you! I’ll kill all of you and drink your blood!”

My best friend was in rare form this evening. Will had been ranting like that ever since he managed to spit out the bandana we’d gagged him with. No one felt like dealing with him, though, so we didn’t bother shoving the gag back in.

Still, I felt responsible for his well-being, even if Will was possessed by a demon and not his usual happy asshat self. I grabbed an MRE—a hamburger patty for the entree—and ducked inside the command tent, one of the few left standing after last night’s monster attack. The interior smelled like sweat, piss and…burned bacon?

“Gross, dude,” I told not-Will. “You smell like a prison latrine.”

Not-Will spit at me. His face was pale in the dim light, but his eyes glowed a brilliant jade green. “You’ll beg for mercy before the end.”

“That’s getting really old. Why don’t you give your voice a rest, okay?” I held up the MRE.  “I’m guessing that even demons have to eat. You hungry?”

Not-Will shut up for a moment, but his muscles still strained against the towing cable keeping him tied to his cot. My best friend, at six-four and two-hundred-forty pounds, was pretty strong on his own. Add in a little dark magic, and he was like a tank with legs. It had taken three guys to tie him up, and the Humvee’s towing cable—one end still attached to the vehicle—had been the only thing hefty enough to keep not-Will chained.

“I would appreciate a meal,” he said in a formal, polite voice.

“Okay. I’ll feed you and bring you some water, if only to keep your mouth full so you can’t scream at us for a while.”

I opened the MRE, discarding anything not-Will could use as a weapon if he got loose.

Because his hands were tied behind his back, I had to feed him.

“Seriously, man, if you remember any of this after we exorcise you, you’ll never live it down,” I muttered as not-Will chomped up his food like a rabid dog.

“I’ll kill you soon, so none of that matters,” not-Will said, smiling and showing me bits of carrot in his teeth.

In any other situation, I’d have laughed. This evening, I had too much on mind to find any of this funny.

Badass Aunt Julie poked her head in the tent while I attempted to shovel applesauce into not-Will’s mouth. She wrinkled her nose at the stench. “Poor Will.”

“Hello, gorgeous.” Not-Will leered at my aunt, and his eyes roamed every part of her body.

Even wearing desert print battle-dress uniform, Aunt Julie was gorgeous…and no one but my Uncle Mike had license to look at her that way. My fists clenched as he said, “Think I’ll keep you around a while after I’ve killed all the men. We could have a little fun.”

Aunt Julie gave not-Will a dangerous smile. The demon must not know who he was dealing with. “I’d like to see you try. I could kill you with a nail. Or a spoon.” Her smile faded into a scowl. “Or a tire-iron. I’m not picky.”

“Captain, did you need something?” I asked, not in the mood to break up a tent brawl. When in doubt, interrupt.

“Sorry,” she said, rubbing her eyes. “The major got worried so I came to check on you.”

I shrugged; Major Tannen—also known as my Uncle Mike and Aunt Julie’s husband—had reason to worry. Right now, it seemed like this day would never, ever end.

I’d gotten most of the food into not-Will’s mouth and I was ready to escape. “Will, if you’re in there, kick that demon’s ass, okay? See you later.”

We’d barely cleared the tent before he started screaming threats again. Every muscle in my back tensed up. “Tell the major I’ll be at the other end of camp.” I jabbed a thumb at the command tent. “I don’t think I can handle listening to that anymore.”

Agent Archer…maybe if I called him that—instead of Dad—this whole situation would be a little less weird.

I doubted it, though. “I need some air.”

I stalked to the far end of camp and settled down facing west. The sun was beginning to set, and I needed its warmth and protection for as long as it lasted. Night would bring horrors, and I had to be prepared to fight them.

I reached into my left jacket pocket and pulled out the St. Christopher medal my girlfriend had given me more than a year ago. I turned it over and over in my hand. I missed Ella like crazy, and the medal gave me hope that I’d live to see another dawn.

Dad came striding out of the HQ tent and headed my direction. He didn’t see Uncle Mike step out behind him, his right arm bound up in a sling. Not-Will had dislocated Uncle Mike’s shoulder in addition to breaking my nose last night. Mike watched Dad’s progress with narrowed eyes. I let out a long breath. As if I didn’t have enough to deal with; now I was caught in a tug of war between the guy who fathered me and the man who raised me. My life could easily be a three-ring circus for all the chaos and drama going on around me.

“Tink, think you could, I don’t know, teleport me somewhere?”

“Crap, now I’m missing you and Ella. How’s that for irony?”

Still nothing. Yeah, Tink was well and truly gone. Our knife-spirits had been banished somehow. Not-Will had told us his mistress had sent them away. As angry as I’d been with Tink when we left on this mission, the absence of her presence in my head left an echoing emptiness.

And despair, too. How could we complete this operation without the spirits’ help? I had to get her back somehow, if not for me, for Will. I’d seen Tink save someone else from a demon possession—maybe she’d be able to help Will, too.

If only I could find her.

Kendra C. Highley lives in north Texas with her husband and two children. She also serves as staff to two self-important and high-powered cats. This, according to the cats, is her most important job. She believes chocolate is a basic human right, running a 10k is harder than it sounds, and that everyone should learn to drive a stick-shift. She loves monsters, vacations, baking and listening to bad electronica.

a Rafflecopter giveaway
Posted by Maria at Thursday, February 06, 2014