Join author Traci Andrighetti on her Virtual Book Tour for Limoncello Yellow, presented by Great Escapes Virtual Book Tours, from February 10 – February 23, 2014.  Please leave a comment or question for Traci to let her know you stopped by, to enter the giveaway for this blog (An autographed copy of Limoncello Yellow with a Mardi gras boa from New Orleans!), please be sure to leave your email address with your comment.  To enter the tour wide giveaway you can fill out the Rafflecopter form below.  You can also follow Traci’s tour here.  My review of Traci’s book will be posted tomorrow. 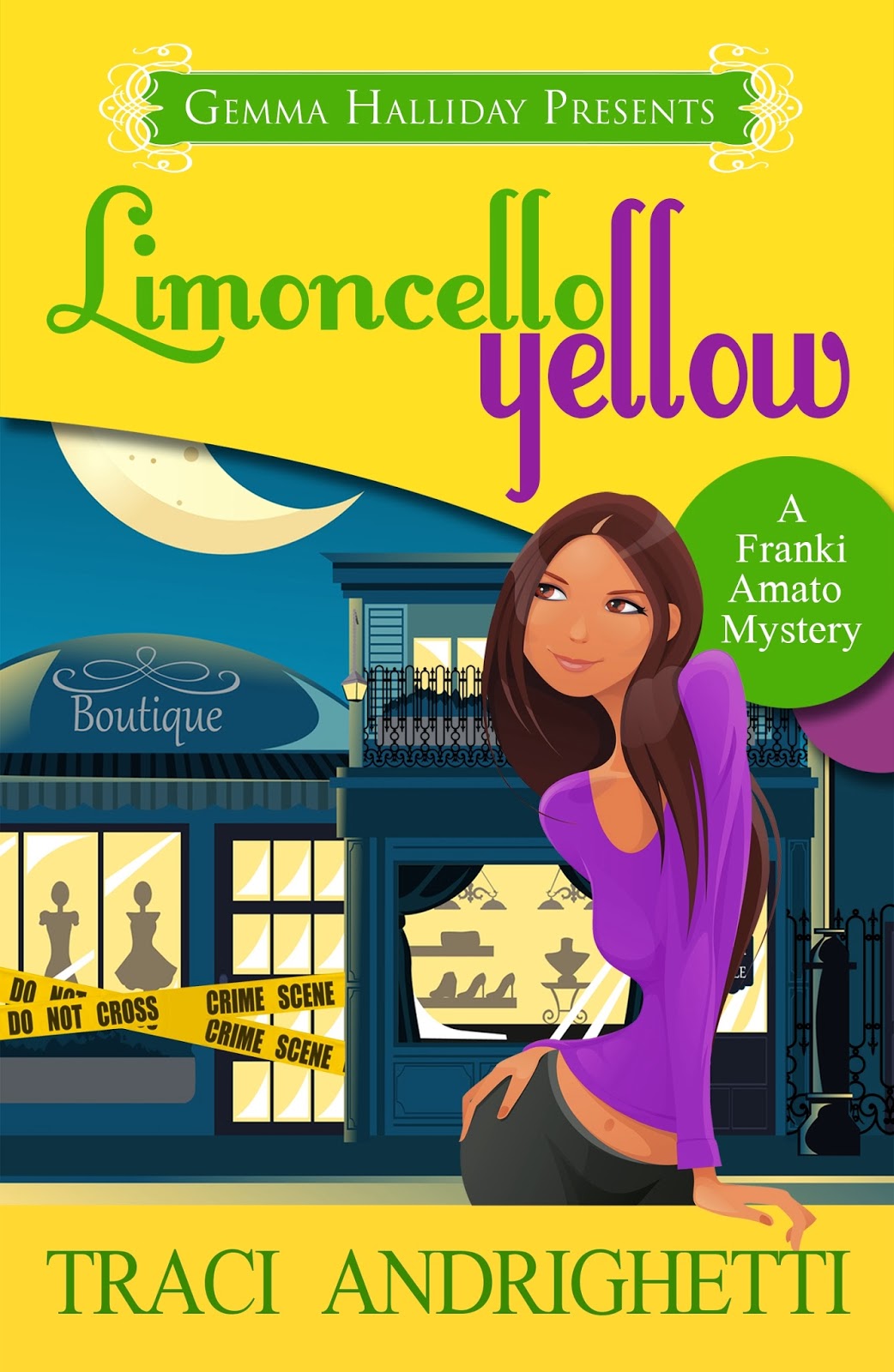 
Francesca “Franki” Amato is a tough-talking rookie cop in Austin, Texas—until an unfortunate 911 call involving her boyfriend, Vince, and a German female wrestler convinces her once and for all that she just isn’t cut out for a life on the police force. So Franki makes the snap decision to move to New Orleans to work at her friend Veronica’s detective agency, Private Chicks, Inc. But Franki’s hopes for a more stable life are soon dashed when Private Chicks is hired by the prime suspect in a murder case to find out what really happened to a beautiful young boutique manager who was found strangled to death with a cheap yellow scarf.

When she’s not investigating, Franki is hoping to seduce handsome bank executive Bradley Hartmann, but most of her time is spent dodging date offers from a string of “good Italian boys”—make that not-so-good aging Italian men—that her meddlesome Sicilian grandma has recruited as marriage candidates. As Mardi Gras approaches and the mystery of the murdered shop girl gets more complicated, Franki must decipher the odd ramblings of a Voodoo priestess to solve both the murder and the mystery of her own love life.

“Traci Andrighetti’s Limoncello Yellow had me tickled pink! Her smart, sassy heroine, wacky cast of characters, and vividly original settings had me glued to the page. I can’t wait to read more from this author!”
- Gemma Halliday, New York Times bestselling author

“Traci’s writing is sharp and funny; the world she paints leaps off the page and makes the reader laugh out loud…. A thoroughly enjoyable new voice in fiction!”
- Kristin Harmel, Internationally bestselling novelist (The Sweetness of Forgetting)

As I surveyed the scene at what looked eerily like the Bates Motel, I was shaking so badly from the cold and fear that I was afraid the gun in my holster would fire on its own. I longed for the cozy fire and protective embrace of my boyfriend that I'd felt as we'd exchanged Christmas presents just hours before.
"Folks, you need to go back to your rooms immediately," Officer Stan Stubbs announced to the crowd of curious motel guests that had gathered.
When the onlookers began to disperse, the woman in room six began moaning again. According to 911 dispatch, she had been in distress for at least half an hour.
I gave an involuntary shiver and wondered what kind of animal would want to cause a woman pain that produced that sort of moaning.
"Something about this doesn't feel like a regular domestic abuse situation," Stan said, drawing his gun. "We need urgent backup, Franki."
I nodded and grabbed the radio from my belt. "I have a 10-39 at the Twilight Motel on Manor Road. Request backup."
Stan began his approach to room six.
I put the device away and drew my gun. Then I hurried over and took my place on the opposite side of the door from Stan.
"I'm goin' in on the count of three," he said in a low voice. "I need to get to the john, and quick like."
I gasped. "Now, Stan?"
Stan was my partner on the Austin PD. As a rookie on the force, I'd been paired with a seasoned veteran of the department. Even though we'd spent the past six months together, I'd learned little from Stan except that he had a "wifey" named Juanita who worshipped the ground he walked on, he valued his handgun collection more than he did his now adult children, and he suffered from chronic gastrointestinal distress. And despite his self-proclaimed "legendary instinct" for cracking cases, he was perpetually baffled by his stomach issues even though the culprit was clear: a steady diet of jelly donuts and chorizo, bean and cheese breakfast tacos that he washed down with a gallon or so of coffee and Gatorade (Did I mention that he was also chronically dehydrated because of the diarrhea?). Needless to say, he spent the better part of every shift visiting the nearest men's room.
Ignoring my concern, Stan grasped his gun with both hands and slammed his right shoulder into the door. It flew open instantly, and he stormed into the room. "Police! Hands in the air!"
As I rushed in behind him, my gun drawn, the woman let out a hair-raising scream.
"What in the hell?" Stan shouted.
I followed his gaze to the bed, and a chill went through my body.
"Why, it's just a couple goin' at it," Stan scoffed.
I blinked hard. Was it my imagination playing tricks on me at 4:30 a.m., or was one member of that couple horribly familiar? As in, exchanging-gifts-by-a-cozy-fire familiar.
"Vince?" I said, my voice barely above a whisper as I stared at my boyfriend of over two years.
He looked at me like a deer caught in the headlights. "Franki?"
Make that, like a cheating rat caught in the act. 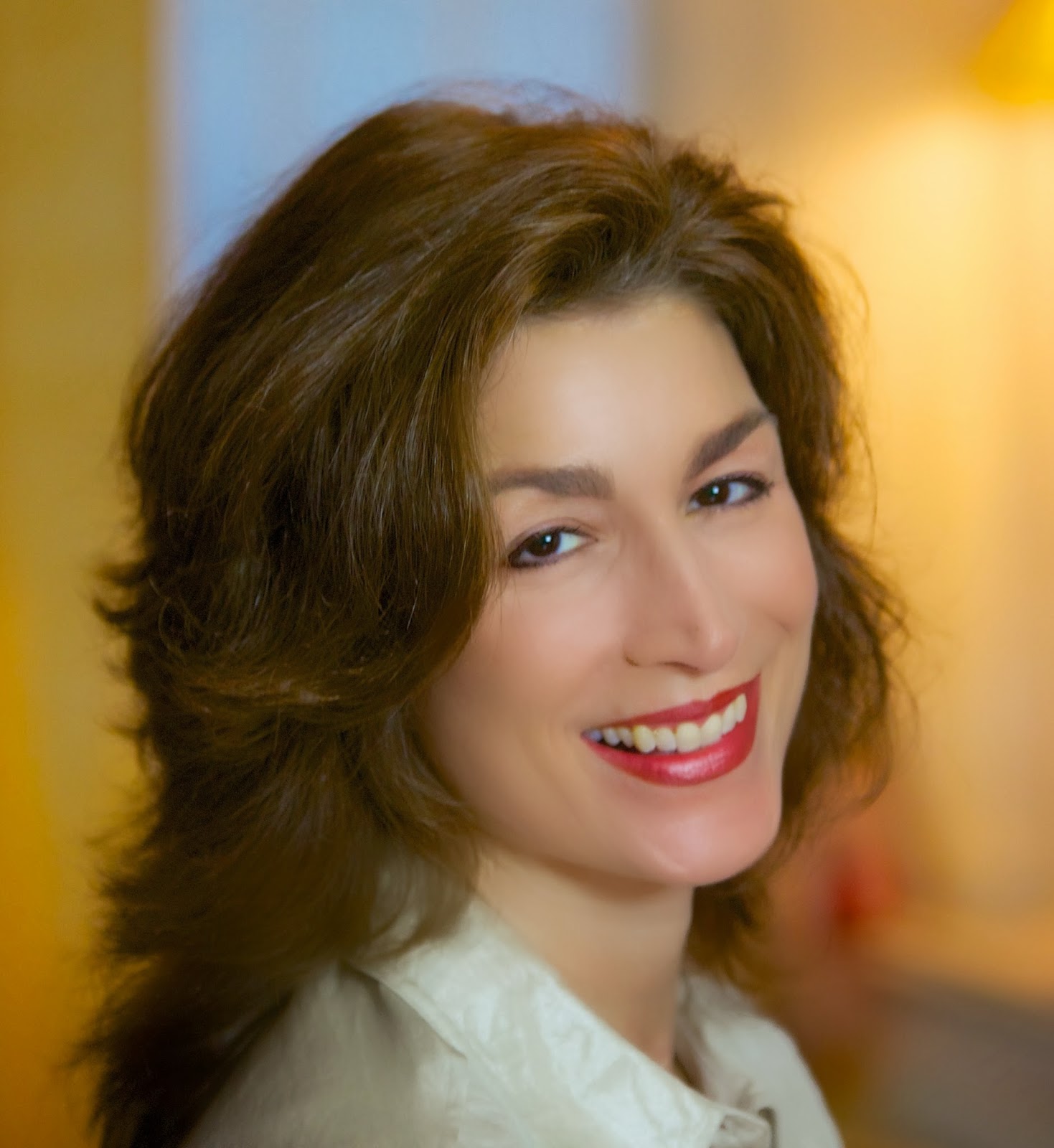 Traci Andrighetti is the author of the Franki Amato mystery series. In her previous life, she was an award-winning literary translator and a Lecturer of Italian at the University of Texas at Austin, where she earned a PhD in Applied Linguistics. But then she got wise and ditched that academic stuff for a life of crime–writing, that is.

If she’s not hard at work on her next novel, Traci is probably watching her favorite Italian soap opera, eating Tex Mex or sampling fruity cocktails, and maybe all at the same time. She lives in Austin with her husband, young son (who desperately wants to be in one of her books) and three treat-addicted dogs. 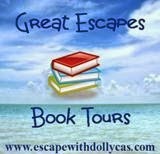 a Rafflecopter giveaway
Posted by Maria at Thursday, February 13, 2014