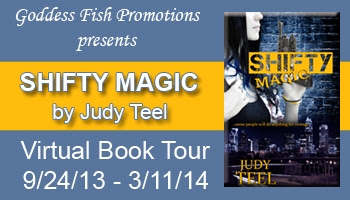 Join author Judy Teel on her Name Before the Masses Tour for Shifty Magic, presented by Goddess Fish Promotions, from September 24, 2013 – March 11, 2014.  Please leave a comment or question for Judy to let her know you stopped by.  You can enter her tour wide giveaway by filling out the Rafflecopter form below.  You can also follow her tour here, the more stops you visit, the better your odds of winning. 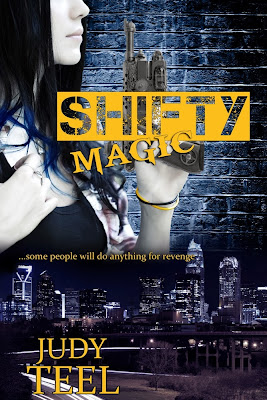 ...some people will do anything for revenge.

A tough PI struggles to track down a vengeful serial killer only to discover that the murderer holds the key to her secret magical heritage.

Book One in the YA13 paranormal/mystery series Dangerous Magic by Judy Teel. "Expect action, on-the-edge-of-your-seat suspense, and the perfect touch of romance."

Lord Bellmonte turned toward the intake officer, dripping charm and debonair sophistication as if the unpleasant internal nastiness had never occurred. The five humans who witnessed the unplanned reveal pretended we hadn’t. A reason to hope for the survival of our kind. Apparently, we occasionally let our instincts trump our curiosity.

A thick, folded bundle of papers with a gold seal on it appeared in the vampire’s hand. “Which officer is responsible for the apprehension of these criminals?” he asked as he handed the right-to-claim papers to the officer.

The young cop’s expression was a little startled as she nodded to Jim and Kyle. Kyle started to step forward more than happy to take credit, but I was faster. My desire to stay under vampire radar was vastly outweighed by my desperate need for cash. No way was I going to be cheated out of my bounty fee.

“That would be me,” I said, pushing my way to the front of the group. “Addison Kittner.”

I kept my gaze steady as Lord Bellmonte’s cold eyes swept over me and his nostrils flared as he got my scent. Always a creepy sensation.

“How charming.” The vampire looked at me a moment longer, obviously amused, and then his gaze slid over Lewis and the lumberjack. “The most notorious Church renegades of the last one hundred years defeated by a human woman, a child.”

I felt the lumberjack tense beside me, but with the collar on him and two powerful vamp leaders just waiting for an excuse to throw him around, there wasn’t much he could do about the verbal abuse. Lewis was too preoccupied with staring morosely at the floor to care.

“My lady,” Lord Bellmonte said to me. “The Church is in your debt.” 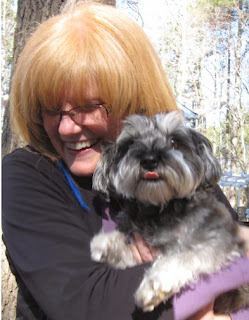 I live in North Carolina with my boisterous family–husband, three kids, a dog and a geriatric bunny–and yup, I’m Southern so occasionally I let a “y’all” slip out. Maybe more than occasionally.

I love my job and dedicate as much of my time to writing as I can. When I’m not doing the weaving of the adventurous and romantic tales, I’m running errands, driving people around (or crazy depending on your perspective), and generally pretending I’m a grownup.

When I was fifteen, I knew I wanted to be a novelist–wanted to write for Harlequin actually. But the calling to tell stories came a lot earlier than that, I just didn’t know what it meant.

I had a lot of growing up to do before I could manage it, though many would claim the growing up part didn’t take--you know who you are--but I finally have my dream job.

Life rocks—so should the books you read!

A fun and action packed paranormal mystery, written for the young adult crowd, Shifty Magic by Judy Teel is a welcome addition to any paranormal reader's library.  A strong, female lead character, sharp and snappy dialogue, and plenty of action kept me turning the pages to discover what would happen next.  The first book in a new series, Shifty Magic is a good start.

A paranormal private investigator, Addison gets called to the scene of a crime; a vampire murder scene where the vampire is the victim.  While many in the community agree the vampire got what he deserved, Addison is hired to find his murderer. Having to work within the paranormal community, will either help or hinder Addison's chances of solving and surviving her new case.

Ms. Teel does a very good job developing Addison's character; she's tough, fiesty and independent.  She's also very human and believes in love, honor and justice, which makes her the perfect person to solve the crime.  Willing to do what it takes to get the job done, Addison does occasionally find herself in over her head, in danger and hurt.  Fortunately she does have some interesting backup.

Ms. Teel also does a good job with the mystery in the story. Plenty of clues are included in the story and there are plenty of interesting characters involved.  While it does take till the very end for Addison to completely solve the case, it is solved and all of the lose ends are tied up.

Will Addison be surprised when she discovers the true identity of the killer?  You'll have to read Shifty Magic to find out.  I enjoyed it and look forward to reading the next book in this series.