Join author Jack Getze  on his Virtual Book Tour for Big Numbers, an Austin Carr Mystery, presented by Great Escapes Virtual Book Tours from September 30 – October 28, 2013.  Please leave a comment or question for Jack to let him know you stopped by.  Jack will be giving away 1 ebook copy of his book at this stop on the tour, so please be sure to leave your email address with your comment. 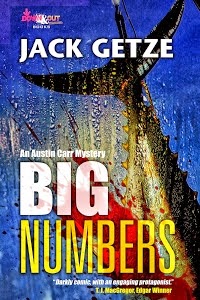 Root for divorced dad Austin Carr, a funny, oversexed scamp who’ll use anything and everything to get his kids back.

Divorced father Austin Carr wakes up every day in a beat-up camper, parked on someone else’s private property. Why? Because his alimony and child support payments were established by New Jersey’s family court system when his income was double, and for the last two years he has failed to earn the legally mandated monthly nut. He’s had his savings drained, his Maxima repossessed, his salary attached, and his visiting rights suspended. He bought the twelve-year-old Chevy pick-up with the rusty camper for $800 last month because another landlord tossed his butt in the street.

Will stretching the rules, his own morals, and the boundaries of common sense raise the cash needed to get his kids back? Or will his big mouth and bad behavior set him up for a nasty double-cross?

Find out if Austin can redeem himself and win back his children.

My name’s Austin Carr. I’m a stockbroker. The slick expensive business cards in my wallet say I’m a Senior Financial Consultant for Shore Securities, Inc., Members of the American Association of Securities Dealers, but I’m really just a salesman and I work for myself. Straight commission. If I don’t sell, I don’t eat.
“Another margarita, Luis.”
A lot of people in my line of work call themselves investment counselors. They wear two-thousand-dollar Italian suits, carry alligator attaché cases, think and talk about themselves as professionals like doctors and lawyers. In truth, we’re closer kin to used car dealers, only more dangerous because losing your life savings is a tad worse than getting stuck with a leaky transmission.
It’s hard to sport illusions about yourself when you live in a camper. And I’ve always treated my clients with honesty, to the point of aggravating every sales manager I’ve ever had. Even so, keeping my self respect, I have not been thinking about this job in a favorable light. In fact, in the years since the market crashed, ruining my sales numbers, my finances, and more recently, any chance of being with my two children, Ryan and Beth, I’ve been wracking my brain, trying desperately to figure another way to earn a living.
“Another double?” Luis says.
“Por favor.”
Although no solution to my dilemma has yet presented itself, I’ve discovered it helps to ruminate in a positive setting: Luis’s Mexican Grill on Broad Street in Branchtown. The decor reminds me of home, Los Angeles, and Luis has an authentico Mexican chef, Cruz. Best of all, Luis works the bar himself every day.
“You are not going to work today?” Luis says.
“Careful, Luis. Your query borders on insult. In fact, I have already called work, only to discover that my monster client delayed our scheduled discourse until this afternoon. I stayed here this morning to spend some quality time with you and Cruz.”
“I recommend this be your final cocktail,” Luis says.
Dealing with numbers all the time is an ache in the ass, definitely, but my biggest problem with being a stockbroker is having to spend all day on the money machine, dialing for dollars, calling busy people at the wrong time, apologizing because the back office screwed up a check, downplaying the risks of an investment to exaggerate the benefits, dancing investors from one asset to another so I can take part of their principal as commission. To be a successful stockbroker, you have to be slightly larcenous.
I lick the wet salt from the rim of my still empty margarita glass. Of course I never worried about little things like morality while I was netting five- to ten-thousand dollars a month. It’s only been since my income dropped by more than half, and mainly since I lost physical contact with my children that I search for the social significance of securities sales. 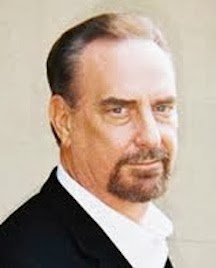 Former Los Angeles Times reporter Jack Getze is Fiction Editor for Anthony nominated Spinetingler Magazine, one of the internet’s oldest websites for noir, crime, and horror short stories. Through the Los Angeles Times/Washington Post News Syndicate, his news and feature stories were published in over five-hundred newspapers and periodicals worldwide. His two screwball mysteries, BIG NUMBERS and BIG MONEY, are being reissued by DOWN & OUT BOOKS, with the new BIG MOJO to follow. His short stories have appeared in A Twist of Noir and Beat to a Pulp. Getze is an Active Member of Mystery Writers of America’s New York Chapter.

Written in the style of a classic crime drama, Big Numbers by Jack Getze is the story of a man caught between his good intentions and temptation.  A well developed main character, good dialogue and colorful secondary characters kept me turning the pages to discover what could possibly happen next.  Filled with dark comedy and plenty of twists and turns, Mr. Getz’ character goes through more experiences in a couple of days than a lot of us go through in most of our lives.

Down on his luck and almost broke, stockbroker Austin Carr, considers himself one step down from a used car salesman.  As if being denied visitation rights to his children, due to being behind on his child support and alimony payments, isn’t enough, Austin finds himself driving an old used truck and living in a camper he bought for $800.  When his richest client, and biggest “fish”, informs him he’s dying of cancer, all Austin can think about is how he’ll survive without his client’s fees.

Willing to do whatever it takes to get back his visitation rights, Austin soon finds himself in a moral dilemma; does he get involved with his dying client’s wife just to keep the account?  And how does he tell a crazy customer that the investment he was forced to sell him has gone completely belly up.  Mr. Getz does a wonderful job developing Austin’s character and having him interact with the secondary characters in the story.  While Austin wants to do the right thing, he finds himself facing temptation, ruin, and straight up danger.

The secondary characters are also well done and contribute a lot to the story.  From the wife of his client, who’s pure hot temptation like “Baby” was in the film noir classic, Double Indemnity, to the angry ex-football player – slash boat captain who’s angry about his bad investment, Mr. Getz plays them like the instruments they are.  He  showcases why we should care for Austin and his never ending troubles, especially when his troubles begin leading him into life threatening danger.

Will Austin manage to survive the client who’ll go to any lengths to get his money back before the soon to be widow lands him in hot water with the SEC?  You’ll have to read Big Numbers to find out.  I enjoyed it and I think you will too. 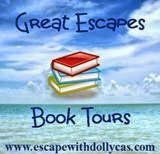 Don't forget to leave a comment or question for Jack to let him know you stopped by.  Jack will be giving away 1 ebook copy of his book at this stop on the tour, so please be sure to leave your email address with your comment.
Posted by Maria at Friday, October 18, 2013