Review for A Heartless Design by Elizabeth Cole 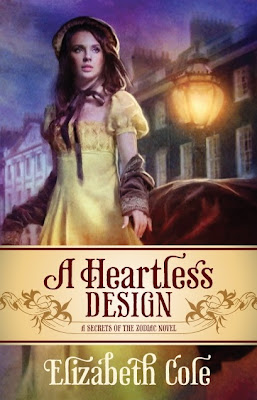 A Heartless Design
by Elizabeth Cole
Secrets of the Zodiac, Book 1

An enigmatic woman, a determined spy, and a design that could shake the foundations of Europe…

“Heartless” Cordelia Bering refuses every marriage offer she receives. Yet men still try to win her, drawn by her sharp wit and intoxicating green eyes. But Cordelia knows a marriage could reveal her deepest secret and truly endanger her life. Besides, she hasn’t met a man worth considering, until...

Sebastien Thorne, a spy in the service of Crown. One of the elite agents in the group known as the Zodiac, he comes to London determined to solve a mystery with roots on the Continent. He won’t let anything distract him. But is Cordelia a distraction, or the key to the mystery? As he learns more about the “heartless” woman, he becomes embroiled in secrets, plots, and a design that could change the future…and Cordelia is at the center of it all.

A HEARTLESS DESIGN is the first book in the Secrets of the Zodiac, a series that blends the sensibilities of modern romantic suspense with the rich background of the Regency period.

Taking place during the Napoleonic wars, A Heartless Design by Elizabeth Cole is the story of the romance between an intelligent, headstrong woman determined to control her own life and a recently titled nobleman secretly working for his Majesty’s secret service.  Well developed characters, good world building, engaging dialogue and just the right amount of physical action, kept me turning the pages to discover what was going to happen next.  Adding just the right amount of romantic and sexual heat, Ms. Cole crafts an intriguing historical romantic suspense and a strong beginning for her new series.

A young woman, often referred to as “heartless”, Cordelia Bering is intelligent, independent and beautiful.  Realizing marriage would limit her freedom, Cordelia has turned down every marriage proposal she’s received, regardless of who makes the offer.  A woman with secrets, Cordelia manages her own money, her own house and more than a handful of servants.  Inheriting her father’s gift towards design and engineering, Cordelia dreams of the day when her most treasured invention, The Andraste, can take to the seas.  Keeping her father’s legacy alive, and making her own contributions in engineering, even though she has to make them under an assumed identity, keeps her busy during the day and enables her to live in the style to which she’s become accustomed.

An Earl by default, Sebastien Thorne works as a secret agent for his Majesty’s kingdom.  Secretly a member of the “Zodiac”, Sebastien is tasked with discovering all he can about The Andraste, an invention no one seems to know anything about, but which enemies of the crown have developed an interest in.  Determined to complete his mission, Sebastien encounters Cordelia at every turn and begins to wonder if she’s a spy working for the French or if fate has put her in his way as a stumbling block.

The scenes between Cordelia and Sebastien are well written and lots of fun.  They have great verbal and sexual chemistry and Sebastien has a hard time keeping his hands off Cordelia, who he nicknames “Cor”.  Both intelligent, and with secrets they are carefully guarding, they never the less continue to run into each other.  When Sebastien begins to unravel the secrets Cordelia is hides behind, he discovers a strong woman willing to go to any length to care for and protect those she loves.  He also discovers his perfect match.

As Cordelia begins to understand Sebastien and what drives him, she discovers a man who’s determined to keep his country and family safe from any enemy.  She discovers his loyalty, his wit and his charm and falls head over heels even though she thinks marriage is something she can never have for herself.

Ms. Cole does a good job developing the secondary characters and I liked meeting and getting to know quite a few of them.  I especially liked Cordelia’s widowed aunt and chaperone, Leonora, a woman who has a good sense of humor and is devoted to her niece and their happiness.  I also enjoyed getting to meet Cordelia’s “staff” of servants, who all have secrets of their own and especially “Bond” her lady’s maid.

I also enjoyed getting to meet Sebastien’s mom and sister, who both try to make sure he’s not falling back into his “wicked” pre-army ways, and the members of the “Zodiac” we get to meet.  While this book has more than one villain, only one is really well developed and it’s easy to dislike him from the start – he’s smarmy from the get go.

Will Cordelia and Sebastian be able to keep the plans for The Andraste safe?  Will their fledgling relationship turn into something more permanent? You’ll have to read A Heartless Design to find out, I enjoyed it and look forward to reading the next book in this series.

FTC Disclosure:  I received a complimentary copy of this book as a part of a book tour in exchange for a fair and honest review.
Posted by Maria at Monday, October 07, 2013