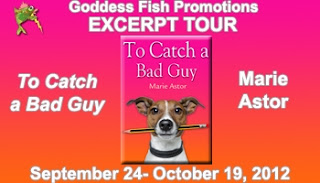 Welcome to my stop on Marie Astor's To Catch A Bad Guy Excerpt Tour.  Please be sure to leave a comment or question below for Marie as she will be giving away five prizes of custom made jewelry to randomly drawn commenters during the tour (Continental US only): 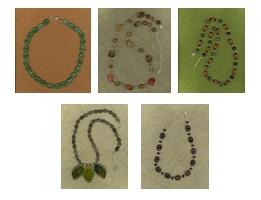 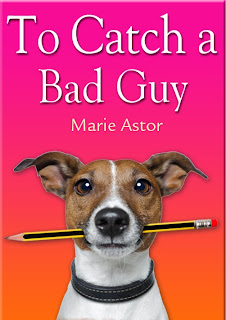 To Catch a Bad Guy
by Marie Astor

Janet Maple is convinced that her life could not get any worse: her stellar career at the DA’s office ended with a lay off and her boyfriend of five years told her that he wants to be just friends. When she lands a job at one of New York’s premier boutique investment firms, Janet begins to hope that her luck is finally turning for the better. Not only is she happy with her new paycheck, but things also seem to be looking up on the personal front, as the company’s handsome attorney expresses keen interest in Janet. However, her euphoria is short-lived, as Janet soon discovers alarming facts about her new employer’s business tactics. When her boss dismisses her suspicions as groundless, Janet finds herself confiding to a cute IT engineer, Dean Snider. The closer she gets to Dean, the more Janet is tempted to break her rule of not dating co-workers, but what she doesn’t realize is that everything she knows about Dean, including his occupation and even his name, is a lie.

Dennis Walker is a top-notch white collar crime investigator who will stop at nothing to put culprits away. When an opportunity for an undercover assignment at one of New York’s premier boutique broker dealers comes up, Dennis jumps at the chance, adopting a persona of geeky IT engineer, Dean Snider. While he may be an ace at his job, years of experience fail him when Dennis meets Janet Maple and finds himself torn between his professional obligations and his personal desires. Will he have to choose between his feelings and duty, or will he find a way to satisfy both?


Janet surveyed her reflection in the closet door mirror. The hour of Lisa’s party was approaching. For as long as the two of them had been friends, Lisa had always had the spotlight. Not that Janet had any ambitions to outshine Lisa tonight. Even if she could, she would not want to, Lisa’s engagement being the reason for the festivities and all, but neither did she want to be fading into the background.

“Hurry up, Janie, we don’t want to be late!” Janet heard her mother’s voice in the hallway.

Janet nodded. “What do you think?”

Christine walked into the room. “Classy, yet sexy,” she proclaimed her assessment of Janet’s figure-fitting black cocktail dress, navy pumps and matching clutch. “Oh, this is so exciting! I can’t believe that Lisa is engaged. I still remember when the two of you were in grade school.”

“I think I know the reason. It’s Lisa’s engagement, isn’t it?”

Janet lowered her eyes, feeling petty. Lisa was Lisa, but they were still friends, and friends were supposed to rejoice at one another’s fortune. But in Janet’s defense, it was difficult to feel happy about something that was constantly being rubbed into one’s face, making one feel inadequate.

Christine patted Janet’s arm. “Honey, it’s all right; it’s only natural to feel this way. “You’ll meet someone special soon, I’m sure of it.”

“I don’t know, Mom. I’m twenty-nine years old; as they say, the clock is ticking. I thought Alex was going to be it… If I at least had a career, I could feel less of a failure.”

“What do you mean, a career? Aren’t you happy about your current job?”

Christine shook her head. “Janet, honey, you’ve got to toughen up. I know you had all those dreams about bringing Wall Street to justice, but the truth of the matter is that you’ve got to keep your own bread buttered. You worked hard at the DA’s office, and how did they repay you? By firing you and promoting Alex instead. Now, Lisa has gotten you a good job, and a well-paying job, I might add. What more could you possibly wish for?”

Marie Astor is the author of contemporary romance novels Lucky Charm, On the Rim of Love, This Tangled Thing Called Love, romantic suspense novel, To Catch a Bad Guy, and a short story collection, A Dress in a Window.

If you would like to find out more about Marie’s books, please visit Marie at her website: www.marieastor.com.

On the Rim of Love: http://www.amazon.com/On-Rim-Love-Contemporary-ebook/dp/B005TOWI7K/ref=pd_sim_kstore_3

Please don't forget to leave a comment or question below for Marie in order to enter her giveaway for custom made jewelry (US only). You can follow her tour here, the more often you comment, the better your odds of winning.