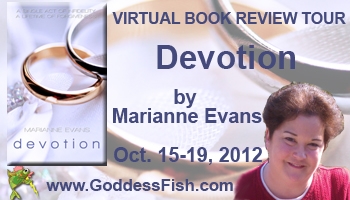 Welcome to the last stop on Marianne Evan's Virtual Book Review Tour for Devotion.  Please be sure to leave a comment or question below for Marianne as she will be awarding 4 autographed print editions of Hearts Crossing, her award-winning novella and book one of her Christian inspirational Woodland Series (US/Canada only) to four commenters from this tour and her blurb blitz tour, and a $25 Amazon gift card as a grand prize to one commentator from both this tour and her blurb blitz tour. You still have time to check out the previous stops on the tour here. You can also check out her blurb blitz tour which will be taking place until October 26, 2012.

From This Day Forward
Christian Music agent Kellen Rossiter has everything he ever wanted: A-list clients from coast to coast, a loving wife who honors and respects him, and a faith life that’s never wavered—until now.

Juliet Rossiter has the perfect life: a rewarding schedule serving the underprivileged, a husband who loves her as Christ loved the church, and a blessed future as a mother—at least that's what she thinks.


For Better or Worse
But what happens when their rock-solid marriage begins to crumble under the weight of an unexpected and powerful temptation? How does love survive when its foundation is shaken?


'Til Death Do Us Part
When human frailty and the allure of sin deal a harsh blow to their relationship, it will take more than love to mend the shattered trust and heartbreak. It will take a lifetime of devotion.

“We’re the sum of our choices, Kellen, and you’ve made yours. That’s not a criticism it’s simply a realization I’ve come to with the past few months as a barometer. I’m married to—” she made a couple of air quotes “—Kellen Rossiter. But the marquee isn’t what I married, and the marquee isn’t what I fell in love with. My biggest fear is that when you take enough time, and focus on me long enough to look deep you’ll find you don’t love me anymore. I guess we changed drastically without even realizing it. Where does that leave us? What does it all mean?”

Her monotone voice undid his control system. He wanted to keep fighting; he wanted her to keep fighting, too but she looked weakened and defeated, as though the ability to do battle just wasn’t in her any more.

“You’re carrying our child. Think about that! God’s plan is for us.” This time, Kellen used the air quotes. Juliet’s chin wavered, her eyes sparkled, but no tears fell. It looked like she had rediscovered the determination to leave him behind, but when he explored the layers of emotion residing just beneath her steel and grit, he found nothing but sorrow.

If she was this sad about the state of their relationship, could there be enough emotion left to build something better?

He battled on. “Juliet, think about something else, too. Do you think it’s mere coincidence that the night I met up against my biggest temptation, God turned me to you, and to us, so irrevocably?”

“That’s where you’re wrong. We should have been irrevocable from the start.” 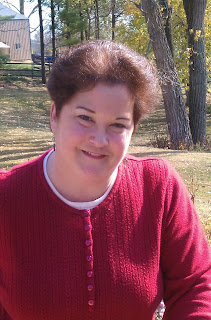 Marianne Evans is an award-winning author of Christian romance and fiction. Her hope is to spread the faith-affirming message of God’s love through the stories He prompts her to create.

Evans’s novel, Hearts Communion, earned Christian Small Publisher Book of the Year honors in the Romance category and readers have lauded her work as: ‘Riveting.’ ‘Realistic and true to heart.’ ‘Compelling.’ Evans has also won acclaim in such RWA contests as The Gayle Wilson Award of Excellence where she has been a finalist twice, and the Colorado Romance Writers Award of Excellence.

A lifelong resident of Michigan, Evans is active in a number of a number of Romance Writers of America chapters, most notably the Greater Detroit Chapter where she served two terms as President. She’s also active in American Christian Fiction Writers and the Michigan Literary Network.

With a one word, Devotion, Marianne Evans not only gives us the title of her book but also provides readers with one of the most important keys to a lasting marriage.  In today's world where divorce is rampant, fidelity and honesty have become endangered concepts, and marriage is under siege from several sides, Ms. Evan's characters give us a glimpse of what it takes to put a damaged marriage back together.  While a standalone book, we have met the primary characters before, they were secondary characters in Heart's Key, the fourth book in the Woodland's series.

A successful talent agent, Kellen Rossister, appears to have it all; a beautiful wife, a large home and everything money buys.  Driven by his success, Kellen continues to want more without realizing his faith and his marriage are beginning to pay the price.  When temptation, in the form of a beautiful and talented client, is placed before him, Kellen finds himself tempted and ignoring the warning bells in his mind.  When his mistakes almost cost him his wife, he'll have to prove he's a man worth a lifetime of devotion.

Julia Rossister knows she has a wonderful life; she's got a loving husband, her Christian faith and the financial resources to help out the underprivileged.  The only thing missing is a child, something she and her husband both want.  Realizing they've both become too involved in their own pursuits, Julia begins to look for a way to bring their relationship back to where it needs to be.  She never planned on having to question her husband's devotion.

The scenes between Kellen and Julia are well written; we get to what takes place in their life from both sides.  We see Kellen's temptation and his failure alongside Julia's growing suspicions and confirmation of her fears.  Ms. Evans did a wonderful job developing both characters and tackled a truly difficult subject, can you and should you forgive someone who's actions led them to betray your trust?

While there are several well developed secondary characters, I found myself most drawn to Marlene, Julia's older sister whose wisdom and love were something she desperately needed, and Pastor Gene, a powerful influence and gifted Christian counselor, who helped them discover a way to heal their hearts.  His wisdom and words of faith could be an inspiration to all.

Will Julia ever really be able to forgive her husband?  Will Kellen be able to prove his devotion?  You'll have to read Devotion to find out.  A gifted storyteller, Ms. Evans really captured my attention with this book and I can't wait to read her next book.

FTC Disclosure: I was provided a complimentary copy of this book in exchange for an honest and fair review.