Welcome to my stop on the Virtual Tour, presented by Goddess Fish Promotions, for The Dream Waters Series by Erin A. Jensen.  I will be spotlighting Dream World, the second book in the series at this stop.  Please leave a comment or question for Erin to let her know you stopped by.  You may enter her tour wide giveaway, where one randomly chosen commenter will be awarded a $50 Amazon/BN GC, by filling out the Rafflecopter form below.  You may follow all of the stops on the tour by clicking on the banner above.  The more stops you visit, the better your odds of winning.  Good Luck!

INTERVIEW WITH ERIN A. JENSEN

What would we find under your bed?

Honestly?  A big plastic tote full of gift bags, tissue paper and wrapping paper, a scale and a large family of dust bunnies.  Something has to give in order to fit writing time in between being a mom and a pharmacist.  Unfortunately, it’s usually the housework.

What was the scariest moment of your life?

When my younger son was in preschool he got so sick with a virus that he stopped eating and drinking and had to be hospitalized.  He ran a high fever, had trouble breathing and kept vomiting.  They did all sorts of tests and couldn’t figure out exactly what he had.  I didn’t leave his hospital room for three days, and I couldn’t sleep until he finally turned the corner and started getting better.

Do you listen to music while writing?  If so, what?

I didn’t when I first started writing.  Back then, I had to have absolute quiet to get in the zone.  Now, I always listen to music while writing.  I have different songs for different characters and different moods to set the tone of the chapter.  I’ll usually listen to one song on repeat that fits the chapter I’m writing at the moment.

What is something you’d like to accomplish in your writing career next year?

I’d love to finish the Dream Waters Series.  I’m twenty-one chapters into writing Book four of the series, but it’s a little too soon to tell if the series will end with the fourth book.  I’ll have to play that by ear.  There are loose ends that need wrapping up, and there are certain things that I plan to have happen.  If it takes five books to do that, I’m alright with that.  I don’t want anything to feel rushed.

How long did it take you to write Dream Waters?

The first book in the series took about three years to finish.  It was my debut novel, and I spent a lot of time rewriting.  There’s definitely a learning curve to writing novels.  Dream World (Book Two of The Dream Waters Series) and Dream Sight (Book Three) both took about a year to write. 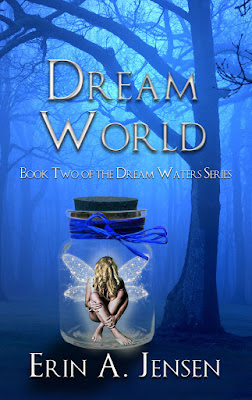 About the book:
Recently released from a psychiatric facility after discovering that he is a dragon and his Dream Sight is not a delusion but a gift, Charlie Oliver sets off to accept the invitation extended by a powerful dragon and potential mentor to join his ‘family’ of Sighted individuals.  As his demon guides begin to instruct him, Charlie quickly discovers just how little he actually knows about the Dream World and the creatures who inhabit it.

While Charlie stumbles through his lessons and struggles to bring out his inner dragon, Emma Talbot has her own struggles to deal with now that she’s been taken from the facility and placed under house arrest.  Imprisoned within the same walls as the husband she suspects of being an adulterer and a murderer, Emma grows weaker while her world continues to crumble around her.

As Charlie begins to tap into his dragon instincts, he learns more about Emma’s past and becomes increasingly convinced that he needs to save her.  But what if the very prison that binds her is the only thing protecting her from what lurks beyond?

It was exactly the sort of evening that I relished slipping into. No moon, no stars, just the pitch black of the eternal night sky and the air that sweltered thick and hot enough to rob the breath from your lungs. I sat down on a boulder beside the seemingly bottomless pool of Water and watched the Water cascade into it from the rock high above. Dark and powerful, the Water fell without a sound. In fact, not a single sound emanated from the forest. Nothing dared make a sound in my presence. I sank into the darkness, merged with it, became it. Then I looked to the top of the canyon a short distance from the Waterfall and knowing black eyes blinked in the darkness, vowing to take my place as soon as I stepped away.

I turned as a creature noiselessly emerged from the forest. Dressed in a heavy black cloak, beads and potion flasks and the teeth of various beasts strung around his neck and waist, he walked upright like a man. But beneath his cloak, the creature sauntered toward me with the bestial grace of a predator. His skull and facial bones were the bones of a man, but no flesh covered them, just pure white bone gleaming in the darkness. A wiry tuft of black hair grew from the top of his skull and eyes darker than the starless sky searched for me through fleshless sockets.

Though he couldn’t see me, he stopped just inches from my feet. “How are you, my old friend?”

I stood and let the darkness slip away from me. “That depends on whether you can help us.”

The corners of his mouth lifted into a disconcerting smile. “Still the same ray of sunshine, I see. I’m well, too. And my journey was uneventful. Thank you for asking.”

I took a step toward him, and he instinctually took two steps back. “I’d lose that smile if I were you. And save the cleverness for your potions. No one here is in the mood for jokes.”

He shook his bony head. “I’ve missed you too, Darkness. You always were the life of the party.” 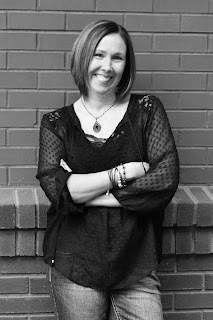 Erin Jensen is a part-time pharmacist and a fulltime creator of imaginary worlds.  She lives in upstate NY with her incredibly supportive husband, two sons (who are both taller than her) and a Yorkshire terrier who thinks he’s the family bodyguard.  In the early days of her writing career, Erin vowed to get a dragon tattoo—once her books received a milestone number of reviews—but she won’t disclose that number any longer, for fear of actually reaching her goal and having to go through with it.

a Rafflecopter giveaway
Posted by Maria at Tuesday, March 06, 2018