Welcome to my stop on the Release Day Blitz, presented by Enchantress Design & Promo, for Tempting Jane by Monica Burns.  Please leave a comment or question for Monica to let her know you stopped by. 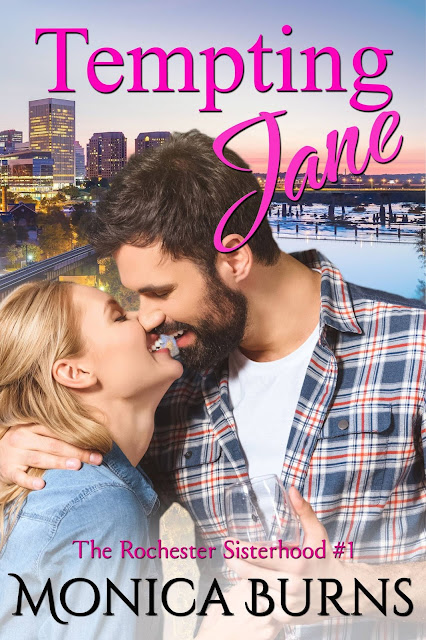 When the perfect staffing storm hits Jane Rochester’s temp agency, she winds up being Lincoln Chandler’s assistant for a week. Jane doesn’t do office romance, and her last relationship was one-sided. But one hot kiss from Lincoln changes everything. Now she has to decide if it’s love at first sight or just a fiery physical attraction.

Lincoln Chandler’s been focused on building his real estate development firm into a Fortune 500 company. He wasn’t looking for a relationship—particularly when his last girlfriend married Lincoln’s biggest competitor and took proprietary information with her in the bargain. But Jane Rochester is an undeniable force of nature, and the heat between them might be more than just a few hot nights in the bedroom.

Jane didn’t know whether to sob or throw up. The man was making an understatement when he’d said that today had been a bad day for her. Mistakes happened. She knew that, and she was far from perfect, no matter how much she tried to be. But today? She couldn’t remember ever having a meltdown on the monumental scale this day had become. The urge to cry made her blink as she pushed back the tears. She had zero intention of making herself look even more unprofessional than she already had today. Jane swallowed the ball of tears lodged in her throat.

“I’m not sure what to say except I’m sorry, which is sounding far too repetitive,” she whispered.

“Accidents happen. It can be fixed.”

The matter-of-fact response created a large crack in the fragile shell of control she’d encased herself in. The man was being kind, and that wasn’t helping her keep it together. She’d come into Chandler Enterprises this morning expecting Lincoln Chandler to be an ass. Instead, he was turning out to be a nice guy. Never in her life had she been so eager to see a day disappear into oblivion.

Unwilling to speak for fear of becoming a blubbering idiot, Jane concentrated on getting him to his appointment. As if understanding her need to drive in silence, he didn’t speak until she took the exit off of the interstate. Quietly, he directed her to their destination off of route sixty. A large navigator was parked on the side of the gravel road Jane turned onto several moments later. She parked in front of the realtor’s car, and shut off the engine. Hands still on the steering wheel, Jane shot a quick look at the man beside her.

“It’s not necessary, but the fresh air will wake you up. You look like you’re about to fall asleep at the wheel.” His words sent images of a horrific car wreck flooding through her head, and Jane nodded.

Without waiting for a response, Jane opened her car door and stepped into a sizeable patch of thick mud. Staring down at her shoe embedded in the mud, Jane sat there dumbstruck. The absurdity of it all had her wavering between laughter and tears. Lincoln had already left the car, and she heard him utter an oath beneath his breath as he squatted next to her foot.

A warm hand cupped the back of her calf as he eased her foot out of her shoe. There was something intimate about the action, and the air left her lungs as electricity streaked up her leg. It spiraled through her with a strength of an out-of-control wildfire until her thundering heartbeat was ringing loudly in her ears. His hand still on the back of her leg, Lincoln cradled her foot in his hand and gently urged her to swing her leg back into the car. With a small tug Lincoln pulled the ruined shoe from the mud. What had been a sensible, serviceable pump would have to be tossed. She’d never be able to get the mud out of the black suede material.

“You haven’t pissed off a gypsy recently, have you?” Lincoln said wryly as he lifted up the shoe to examine it. “I’m beginning to think you’re cursed.”

“I have a pair of tennis shoes in the back. I’ll just—”

“Nope, you’re staying here. Turn on the stereo, roll down the windows, lean back and close your eyes. I shouldn’t be too long.”

Lincoln’s expression dared her to argue with him, but she was more than happy to follow his instructions. He shut her car door then opened the rear door to place the mud-soaked shoe in the floor board of the back seat. Hands braced on the roof of the car, he stared down at her for a moment.

“Your eyes aren’t closed.” Despite the lazy, seductive note in his voice, it was still a command.

He arched an arrogant eyebrow at her, and Jane obediently closed her eyes and leaned her head back against the headrest. The scent of honeysuckle brushed across her senses, and something like the kiss of a butterfly caressed her cheek.

A bestselling author of spicy historical and paranormal romance, Monica Burns penned her first short romance story at the age of nine when she selected the pseudonym she uses today. Her historical book awards include the 2011 RT BookReviews Reviewers Choice Award and the 2012 Gayle Wilson Heart of Excellence Award for Pleasure Me. She is also the recipient of the prestigious paranormal romance award, the 2011 PRISM Best of the Best award for Assassin’s Heart. From the days when she hid her stories from her sisters to her first completed full-length manuscript, she always believed in her dream despite rejections and setbacks. A workaholic wife and mother, Monica believes it’s possible for the good guy to win if they work hard enough.

Connect with Monica at