Welcome to my stop on the Book Blast, presented by Goddess Fish Promotions, for Skeletons in the Attic by Judy Penz Sheluk.  Please leave a comment or question for Judy to let her know you stopped by.  You may enter her tour wide giveaway, where one (1) randomly chosen commenter, will be awarded a $10 Amazon/BN GC, by filling out the Rafflecopter form below. You may follow all of the stops on the tour by clicking on the banner above, the more stops you visit, the better your odds of winning.  Good Luck! 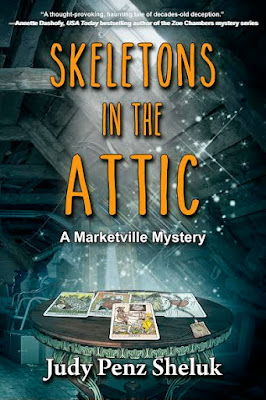 What goes on behind closed doors doesn’t always stay there…

Calamity (Callie) Barnstable isn’t surprised to learn she’s the sole beneficiary of her late father’s estate, though she is shocked to discover she has inherited a house in the town of Marketville—a house she didn’t know existed. However, there are conditions attached to Callie’s inheritance: she must move to Marketville, live in the house, and solve her mother’s murder.

Callie’s not keen on dredging up a thirty-year-old mystery, but if she doesn’t do it, there’s a scheming psychic named Misty Rivers who is more than happy to expose the Barnstable family secrets. Determined to thwart Misty and fulfill her father’s wishes, Callie accepts the challenge. But is she ready to face the skeletons hidden in the attic?

Leith let out a theatrical courtroom sigh, well practiced but over the top for his audience of one. “You haven’t really been listening, have you, Calamity?”

I was forced to admit I had not, although he now had my undivided attention. Marketville was a commuter community about an hour north of Toronto, the sort of town where families with two kids, a collie, and a cat moved to looking for a bigger house, a better school, and soccer fields. It didn’t sound much like me, or my father.

“You’re saying my father owned a house in Marketville? I don’t understand. Why didn’t he live there?”

Leith shrugged. “It seems he couldn’t bear to part with it, and he couldn’t stand living in it. He’s been renting it out since 1986.”

The year my mother had left. I’d been six. I tried to remember a house in Marketville. Nothing came to mind. Even my memories of my mother were vague.

“The house has gone through some hard times, what with tenants coming and going over the years,” Leith continued. “I’ve done my best to manage the property for a modest monthly maintenance fee, but not living nearby…” He colored slightly and I wondered just how modest that fee had been. I glanced back at the photo of his vibrant young family and suspected such treasures did not come cheap. There was probably alimony for the other trophy wives as well. I decided to let it go. My father had trusted him. That had to be enough. 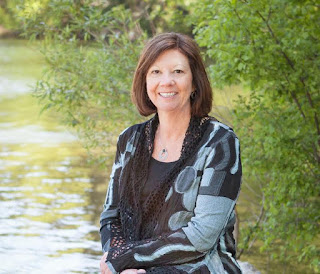 Judy is a member of Sisters in Crime, Crime Writers of Canada, International Thriller Writers and the Short Mystery Fiction Society.

a Rafflecopter giveaway
Posted by Maria at Thursday, December 01, 2016