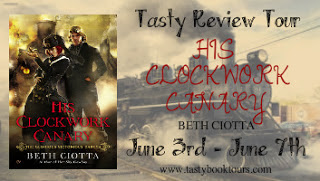 Welcome to my stop on Beth Ciotta’s Review Tour for His Clockwork Canary.  Please leave a comment or question for Beth below to let her know you stopped by.  You can enter the tour wide giveaway by filling out the Rafflecopter below.  You can follow the tour here, and check out my review here.

You can also check out the Release Day Book Blast here. 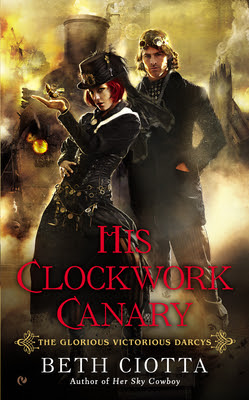 History is repeating itself.

For ambitious engineer Simon Darcy, winning Queen Victoria’s competition to recover lost inventions of historical significance is a matter of pride—and redemption. After all, it was Simon’s failed monorail project that left his family destitute, and winning the tournament would surely restore the Darcys’ reputation.

Simon sets his sights high, targeting no less than the infamous time-travel device that forever changed the world by transporting scientists, engineers, and artists from the twentieth century. The Mod technology was banned and supposedly destroyed, but Simon is sure he can re-create it.

His daring plan draws the attention of Willie G., the Clockwork Canary, London’s sensationalist reporter. Simon soon discovers that Willie is a male guise for Wilhemina Goodenough, the love of his youth, who left him jilted and bitter. He questions her motives even as he falls prey to her unique charm. As the attraction between the two reignites, Simon realizes that this vixen from his past has secrets that could be the key to his future…as long as he can put their history behind him.

He’d waited for her. Here. At this railway station. Their agreed-upon meeting place. They were to elope to Gretna Green. Only Mina never showed.

Simon navigated the crush of morning travelers whilst shoving aside the smarting memories of the redheaded sprite’s betrayal. His heart had long since healed, but there was a lingering sting to his pride. He’d been so sure of their love, so sure of her. True, she’d been young— sixteen to his nineteen— but her keen mind, adventurous nature, and worldly views had rendered the two of them kindred souls.

Or so he’d thought.

Leaving Paddington, Simon signaled an automocab, and a scant few minutes later abandoned the foul-smelling, gear-grinding vehicle, choosing to walk the remaining distance rather than waste time in congested traffic. Glancing up, he briefly envisioned the tracks of a monorail system and mentally calculated the advantages the alternate mode of transportation would have upon this thriving area. There were times, by God, when Simon felt as though fate had deemed him undeserving and schemed to rob him of notable success. Resentful, he shut down his dream and focused on his immediate goal. Unfortunately, navigating the cobbled streets of Notting Hill threw him back in time, intensifying his prickly mood. He envisioned Mina’s playful smile, her long vibrant red tresses, and brilliant green eyes.

Taking her innocence before marriage had been reckless and irresponsible, but blimey, she’d stirred his blood, seducing him with her striking beauty and kinetic spirit. This moment his senses sparked as though she were hot on his heels. Absurd, as she had moved to Scotland years ago with her parents. Still, he couldn’t shake the feeling of being followed.

Simon pulled his derby low over his brow, then glanced at the shop’s display window to his right. Indeed, he spied a familiar reflection. Familiar because he’d noticed the ill-tailored bohemian when he’d stopped to purchase the morning newspaper and then again on the train, slouched in a seat close to his own. Dipper? Newshound? Or perhaps the disgruntled brother of a woman Simon had dallied with.

Indeed he had no shortage of lovers.

Even though Thimblethumper’s was just ahead on the corner, Simon crossed to the other side of the street. Sure enough, the peculiar chap followed.

“I . . .” The bloke met Simon’s gaze and dithered, stumbling back two paces and into the path of a steam-powered automocoach.

Cursing, Simon yanked the flustered chap from harm’s way and into a sheltered alcove. “Get a grip, man,” he said, although it was his turn to falter. His body responded to their close proximity in a curious and bothersome manner.

In a heartbeat, Simon assessed the smooth skin and slight bone structure of the face all but hidden beneath a floppy newsboy cap and obscured by shaggy, ink black hair. “I say, are you a man?”

The kid shoved at Simon’s shoulders, pushing him back whilst tugging his cap even lower. “I’m no Miss Nancy, if that’s what you’re suggesting.”

Indeed it was not, but that would explain the effeminate aura. It did not, however, explain Simon’s keen sexual awareness. Although adventurous in the bedroom, he had never been attracted to another man. “Why are you following me?”

The kid fussed with his colorful scarves, stealing a glance at his bronze time cuff. “I have a proposition.”

“Not that kind of proposition.”

“Do I know you?” Simon couldn’t shake the sense of familiarity even though he was most certain he’d never met this dark-eyed bohemian. A pretty boy with an intense, caged energy. A source of increasing fascination.

“Undoubtedly, you know of me.” He offered a worn gloved hand in greeting. “The name is Willie G.,” he said in a clipped, gruff tone. “Known professionally as the Clockwork Canary.”

Simon ignored the proffered hand and grabbed the Canary by his ridiculous lapels.

“Cheese and crackers!” the kid exclaimed.

Simon froze. He hadn’t heard that particular curse in a long time, Another reminder of Mina. Damnation. Shaking off a bout of déjà vu, Simon whisked the Canary into the alley. Blood boiling, he pinned the focal point of his fury against a brick wall and glared. “You made a laughingstock of my father.”

“Not accepted.” Simon stared into the Canary’s wide eyes. The damnable pressman trembled beneath his touch. Was he a coward as well as a nance? Meanwhile, Simon’s own heart pounded with something more troublesome than rage. He couldn’t get that curse, Mina’s curse, out of his mind. Unsettled, he released the lad and distanced himself posthaste. “What do you want?”

“I have it on good authority that you are joining the Race for Royal Rejuvenation.”

“To report my misadventures?”

“To chronicle your journey. Your success.” Simon narrowed his eyes. “What makes you think I’ll succeed?”

The Canary gave a cocky shrug. “You’ll have me as your secret weapon.”

Simon snorted. Of all the cheek.

“If you need answers, I can get them. Information?  Scoop? I can be of service. It is what I do. What I am good at. Ferreting out data. Have you never read one of my candid interviews?”

“I prefer respectable broadsheets to the Informer.” He had in fact skimmed random accounts. And if he hadn’t, they were often the subject of tavern gossip. The Clockwork Canary, though sensationalistic, was a perceptive interrogator and a gifted writer.

“I’ll pay you,” the Canary blurted. “That is, the Informer will pay you a generous sum if you allow me to experience and chronicle your expedition. A serialized version highlighting the more adventurous and romantic elements.”

Simon crossed his arms over his chest. “Romantic?”

The Canary copied his stance and cocked his head. “Your endless affairs and scandalous liaisons are almost as famous as your engineering flop.”

The insult would have stung more if Simon had been less intrigued by the cutting delivery. By God, the kid sounded jealous. “How much?”

The Canary blinked and then mumbled a hefty sum.

“You are a Darcy. Therefore, you command great interest and high payment.”

Difficult to ignore a lucrative offer that would greatly benefit his mother and sister. Still, of all the pressmen. The damnable Clockwork Canary? Did Simon’s recent ill luck know no bounds? “Your condescending tone suggests this feature is not of your choosing.”

“My job was threatened, if you must know.” The kid stared daggers into Simon’s skeptical gaze. “Secure a posh story on Simon Darcy, or else, I was told.”

That snagged Simon’s attention, if not sympathy. Knowing he was a person of interest buffered many a recent sting. He shifted his gaze from the arrogant pressman to Thimblethumper’s Shoppe. “Advance my cause with a certain merchant, Willie G., and you have a deal.” 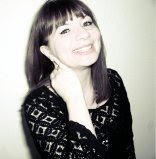 Storytelling comes naturally to award-winning author Beth Ciotta. Dubbed "fun and sexy" by Publisher's Weekly, Beth specializes in writing Romantic Comedy with a Twist of Suspense and is published in contemporary, historical, steampunk, and paranormal romantic fiction. "I can't think of anything more fulfilling than writing stories where everyone (except the villain, of course) gets a happy ending!"

Beth lives in NJ with her husband, two zany dogs, and a crazy cat. A retired professional performer, Beth now pours her artistic passion into her writing. To learn more about her colorful life, visit her website at www.bethciotta.com
Facebook / Twitter

a Rafflecopter giveaway
Posted by Maria at Tuesday, June 04, 2013