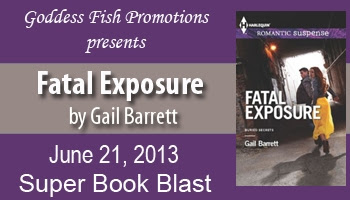 Welcome to my stop on Gail Barrett’s Super Book Blast for Fatal Exposure.  Please leave a comment or question for Gail in the comment section below to let her know you stopped by.   Gail will be awarding a $25 Amazon/B &N (or other bookstore of the winner’s choice) GC to one randomly drawn commenter during both of her tour dates.  You can follow her tour here, the more often you comment, the better your odds of winning. 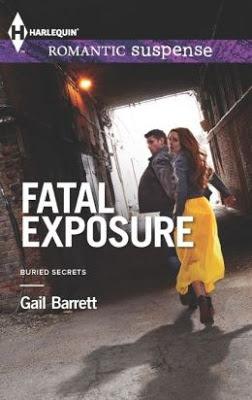 Cold-case detective Parker McCall has spent fifteen years trying to solve his brother’s murder.  Now a chance photo of the killer in the newspaper sets him hard on the woman’s trail.  A former teenaged runaway, reclusive, award-winning photojournalist B.K. Elliot chronicles the harsh reality of life on the streets -- until a photo in the paper reveals her identity, blowing the lid off her secret past.

His gaze swung back to hers. Several seconds ticked by. His scrutiny made her uneasy, the intensity in his eyes making it impossible to breathe.

And, suddenly, Brynn suspected he knew more than he’d let on—about her relationship to her stepfather, about her troubled childhood, about the horrific abuse that drove her from home. That he was simply biding his time—like the trained interrogator he was—waiting for her to confess the truth.

She couldn’t believe how tempted she was to do just that—to forget that he was a cop, to ignore the danger hounding her footsteps and tell him the unvarnished truth.

But then, Parker’s expression changed. His eyes were just as intense, but hotter, more hypnotic, like whirlpools dragging her under—in a decidedly sensual way.

Her pulse battered her throat. He pushed away from the truck and moved even closer, trapping her against the cab. And that insane attraction rippled between them, that unruly maelstrom of need.

Her breath backed up in her lungs. Her belly tightened, acute tremors of excitement tripping along her nerves. She tore her gaze from his jet black eyes to the black stubble shadowing his granite jaw, and stalled on his gripping mouth. Then he reached out and stroked his finger down her cheek, sending a torrent of pleasure streaming through her veins.

Was he going to kiss her?

His gaze dropped to her mouth. Her heart nearly leaped from her chest.

And for a wild moment she wondered if she should push him away—or pull him close.

A former RITA® and Daphne finalist, Gail Barrett has received the Book Buyer’s Best Award, the Holt Medallion, the Booksellers Best, The National Readers’ Choice Award, and numerous other awards.  She lives with her husband in Western Maryland.  Readers can contact her through her website: www.gailbarrett.com

Don't forget to leave a comment or question for Gail in the comment section below to let her know you stopped by.   Gail will be awarding a $25 Amazon/B &N (or other bookstore of the winner’s choice) GC to one randomly drawn commenter during both of her tour dates.  You can follow her tour here, the more often you comment, the better your odds of winning.
Posted by Maria at Friday, June 21, 2013