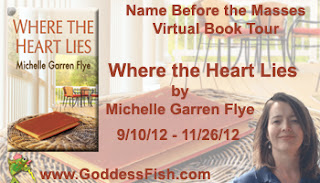 Welcome to my stop on the Name Before the Masses Virtual Book Tour for Where the Heart Lies by Michelle Garren Flye.  Please be sure to leave a comment or question below for Michelle as she will be  awarding promotional postcards from Carina Press with 10% off coupons to one commenter at every stop, and a $10 Amazon GC + a copy of Bartlett's Poems for Occasions, which inspired part of the book to a randomly drawn commenter during the tour. You can follow her tour here.

Falling in love is such an amorphous thing, it’s really hard to get a handle on. And yet, as a romance writer, I have to convince two characters to indulge in this wacky emotion quite often. It doesn’t work to just pretend they’re in love, either. I’ve discovered that when you pretend your characters are in love, although you can make them go through the motions of being in love, you end up with a wooden-feeling story. Like Pinocchio before he became a real boy, my characters are puppets and I’m just pulling the strings.

That’s not good enough for me. I want that real feeling, and I’m getting better at attaining it, although I will not yet claim to be an expert. The first time I managed it, it was almost like when I fell in love with my husband. I could feel what my hero and heroine felt, including the unexpectedness of it. At first, I wasn’t even sure how I did it. How was it that I could create two characters and actually feel like they really did take an unexpected plunge into a depth of real emotion?

I’ve pinpointed a few things that show up consistently in my true love couples. The first thing I do to convince my hero and heroine to fall in love is to give them little things to observe and admire about each other. The way her hair falls or his graceful, athletic movements. I’ve also noticed these couples have little mannerisms to endear one to the other. In my recent novel Where the Heart Lies, Liam, the hero, performs little magic tricks with toothpicks, quarters, and matches using his knowledge of physics. Alicia, the heroine, on the other hand, is so loyal to her dead husband’s memory, she’s moved out to his hometown to take care of his parents—and Liam admires that about her.

And what creates the final magic? I haven’t quite discovered that yet, although I feel like I’m getting closer with each novel. I am working toward creating that perfect couple who will be able to tell me exactly when you cross the threshold from being friendly to falling in love. Every character I create, I study and sculpt to be that perfect someone for my other character. But what’s the final point where love blossoms into being? Maybe my next couple will tell me. 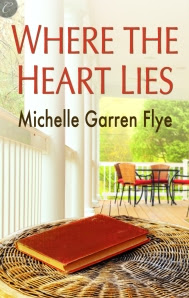 Where the Heart Lies
by Michelle Garren Flye

All widowed Alicia Galloway has left of her war-hero husband are the flag that draped his coffin and his final wishes: to move to his hometown, take over the family bookstore and enjoy a simple, quiet life with their two small children. When she arrives, her husband’s best friend makes that new life anything but simple. How can she be so drawn to Liam Addison?

Liam only intended to help Alicia get settled. But one unexpected kiss awakens his long-held forbidden feelings. Soon, the town busybodies swoop in to warn Alicia away from him. Because no matter the man he’s become, he’ll never live down his reputation as town troublemaker and wolfish womanizer.

No one wants the war hero’s sweet widow and the supposedly former bad boy together. But the more everyone tries to keep them apart, the closer he and Alicia get. And the more determined Liam is to prove he’s a changed man. Will it be enough to convince Alicia to let a new love in her life?

Liam crossed the yard in two strides, taking the hoe from her hands and turning the snake’s body over with its blade. He turned to her in amazement. “You killed it?”

Alicia nodded wordlessly, covered her face with her hands, and suddenly too weak to stand, fell to her knees in the grass. “Hey!” She heard his exclamation and the hoe hit the ground as he dropped it, then sank down next to her. “Hey, it’s okay. You did good, sweetheart.” His arms surrounded her and he pulled her first against him, then into his lap, stroking her hair and back, his hands warmer than the sun’s rays against her skin.

The approval in his voice brought tears to her eyes at the same time that his caresses tingled deliciously. She responded without thinking, putting her arms around his neck and then, because she wanted nothing more than to kiss this man who meant so much to her, she turned to him, finding his lips easily, feeling his body freeze for a moment then give in to the kiss, the wonderful, desire-fulfilling kiss that she’d longed for…

Michelle Garren Flye is a mother, writer and editor based in coastal North Carolina. She obtained her degree in Journalism and Mass Communication from the University of North Carolina at Chapel Hill in 1992. Not liking the hours required of a journalist, she went on to obtain a Master’s in Library and Information Science from the University of North Carolina at Greensboro in 1997. When her first child was born in 2000, she packed her diplomas away and began a new life as a stay-at-home mom, which fortunately afforded her the opportunity to pursue her writing on a semi-regular basis.

Michelle is the author of three romance novels, Where the Heart Lies (Carina Press 2012), Winter Solstice (Lyrical Press 2011) and Secrets of the Lotus (Lyrical Press 2010). Michelle also self-published a fiction book titled Weeds and Flowers for the Kindle in December 2011.

~~~~~~~~~~
Please make sure to leave a comment below to be entered in Michelle's giveaway.  The more often you comment, the better your odds at winning.  You can follow her tour here.