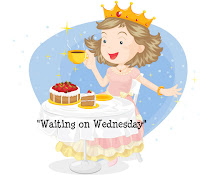 "Waiting on" Wednesday is a weekly event hosted by Jill at Breaking the Spine which highlights upcoming releases we're eagerly anticipating.

This week's pre-publication "can't-wait-to-read" selection is:

After all the males in her pack are murdered, lupine shifter Analena Cordona is doing the best she can to keep her remaining family safe. She doesn’t want to depend on anyone, but someone is targeting her pack and the threats are getting worse every day. When violent attacks also start escalating in town against humans, she knows that sooner or later, people are going to start pointing fingers at her kind regardless of proof. Unless she can figure out who wants to hurt her pack and why, a few cattle mutilations and property damage will be the least of her worries.

Connor Armstrong has waited fifty years to claim what’s rightfully his: Ana. And with the pack vulnerable, he knows the time is right to return to his hometown and the woman he once called his best friend. In exchange for his pack’s protection, he demands that she be his. But things don’t go quite as planned. Ana is as stubborn as she is sexy and if Connor doesn’t gain her trust, he’ll never get the chance to claim the one woman who’s never left his thoughts. And if he can’t, the evil hunting her will destroy everything they both cherish.

What is your "Waiting on" pick this week?

Want to participate?  Grab the logo, post your own WoW on your blog (or if you don't have a blog post it below in the comments) and leave your link below!