Welcome to my stop on the Review Tour, hosted by Goddess Fish Promotions, for Not Quite Dead by Lyla Payne.  Please leave a comment or question for Lyla to let her know you stopped by.  You can enter her tour wide giveaway, for a $20 Bookstore GC (winner's choice) to a randomly drawn commenter during the tour, a Signed paperback of NOT QUITE DEAD + swag (US only) to another randomly drawn commenter and a final prize of an eBook set of THE ROSE GARDNER MYSTERIES by Denise Grover Swank to one more randomly drawn commenter during the tour, by filling out the Rafflecopter form below.  You must comment in order to enter the giveaway.  You can also follow the rest of Lyla’s tour here, the more stops you visit, the better your odds of winning. 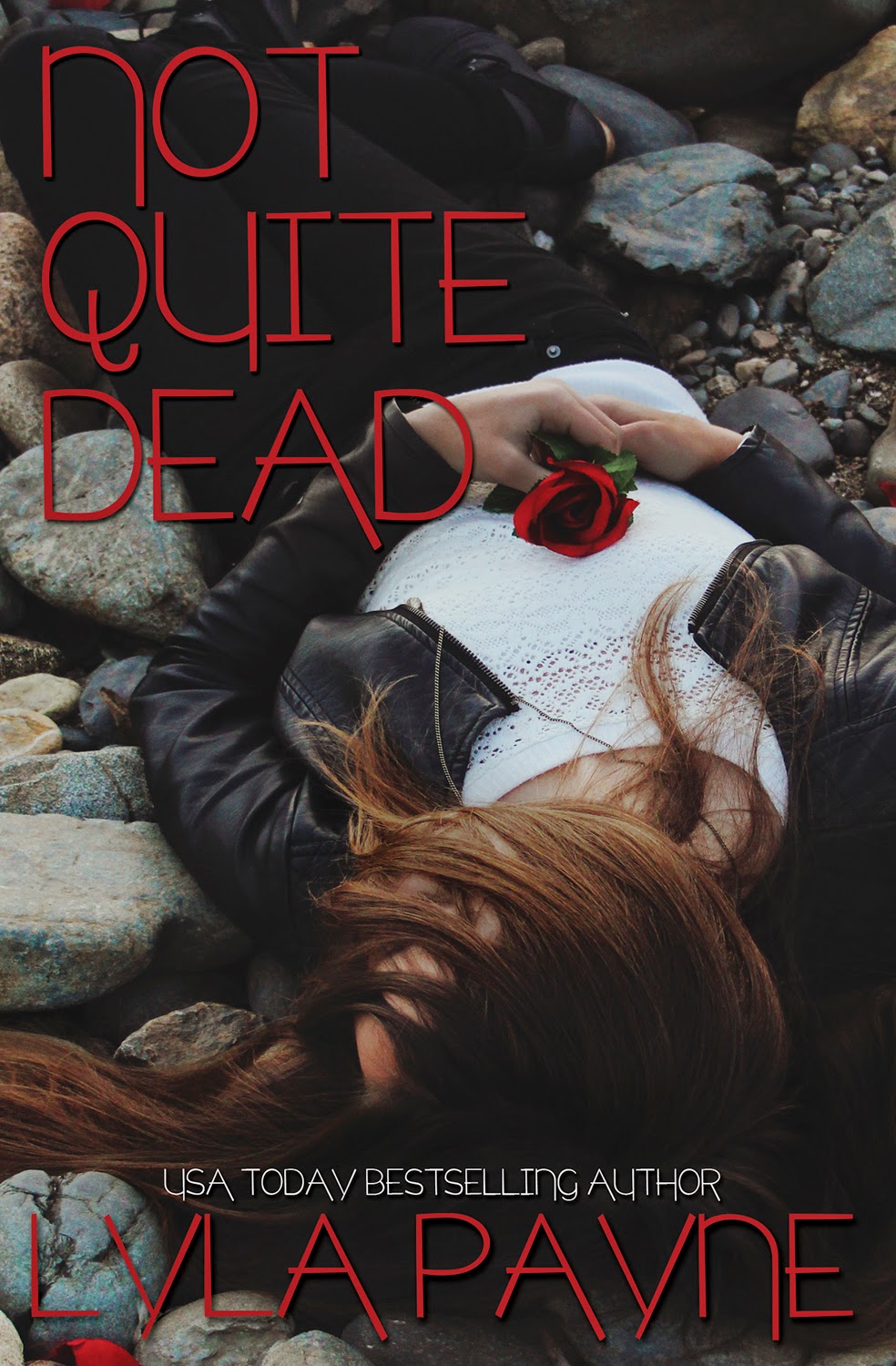 Not Quite Dead
By Lyla Payne
A Low Country Ghost Story, Book 1

A broken engagement sends Graciela Harper crawling back to Heron Creek with her tail between her legs, but finds the sleepy little town too changed to set her life right. Not even her budding drinking problem can obscure her Gramps’s failing health, or erase the mental picture of her first love happily married to her childhood best friend. To top it all off, she’s having a heck of time convincing the town’s dashing young mayor of her unfit-for-dating status.

When the ghost of 18th century lady pirate Anne Bonny starts insisting on a near daily audience, Graciela has to confront something else she never expected—being certifiably nuts at twenty-five years old.

Her brand new "I don't give a crap" attitude makes it easy to dismiss the mysterious threats that seem to be tied to her search for more information on the long dead pirate, but when her family becomes a target, Gracie knows she needs to find out why the ghost insists on being a constant, reeking companion.

If Graciela can put aside her prejudice against people without a pulse, she may discover that Anne Bonny’s problems are intricately linked with her own. The past harbors answers could help the cantankerous spirit find closure, but she is, after all, already dead. If Graciela doesn’t move fast, she might find herself doing the haunting, instead of the other way around.

I ignore the hand, getting to my feet and brushing dirt off my dress before confronting its owner.

A man with an overly strong jaw and wavy, sun-kissed brown hair watches me with humor sparkling in his hazel eyes. Too bad he picked the wrong girl in the wrong year, because nothing about getting knocked on my ass strikes me as humorous.

Undaunted by the cocked eyebrow I shoot his direction, he keeps a hand out, now poised for a shake. "Beauregard Drayton."

"That’s a mouthful," I mumble, searching the ground for my purse. It’s lying in a puddle, which stirs up more irritation, as does the fact that he hasn’t moved. He’s tall, at least six foot three, and even under the blue pinstriped suit and red tie, there’s no secret why he felt like bricks. His face is hard, too—all rough angles and sharp cheekbones.

His eyes are soft, though, and the enticing mixture of green, blue, and gold still reflects amusement. "Well, what do you think?"

"About you?" I shrug, even though I didn’t mean to study him quite so openly. "Typical."

"Actually, typical is the opposite of interesting." I shoulder past him and continue toward my destination, annoyance tightening my chest when the sound of expensive shoes clicks on the sidewalk behind me.

Beauregard Drayton catches up, then slows his pace to match mine. It would have behooved me to drive to the Wreck, apparently. Or skip it all together, no matter how the thought of their fish tacos makes me drool.

"You can call me Beau, everyone does," he comments, as though we’ve been carrying on a conversation.

"What should I call you?"

It’s clear my rudeness isn’t going to make him go away, and the part of me that was raised below the Mason-Dixon Line blushes in shame at my behavior. Grams would tan my hide if she could see me now. The thought of her stern, loving expression makes me relent, along with the fact that my eventful morning has worn me out. I don’t have the energy to outmaneuver him.

"Lovely to meet you. Where are you going?"

The fact that he doesn’t comment on my different name moves him up in my estimation. Still, his nosiness makes me sigh. Loudly. "To get some lunch."

"Are you meeting someone?"

"Yes. His name is Vlad and he lives to drink the blood of persistent, well-dressed men, so I suggest you run along."

"Really? Dracula’s making a midday appearance in Heron Creek? Did you call the paper? Danny’s is going to be mad if he misses out on the interview opportunity."

If you’re a fan of cross genre books featuring ghosts, an old family mystery mixed in with a contemporary romance, you just might want to pick up a copy of Lyla Payne’s Not Quite Dead.  Filled with interesting characters, snappy dialogue, plenty of emotional angst and a light romance, Ms. Payne’s book kept me turning the pages to discover what would happen next.  Set in a charming fictional town in South Carolina, with just the right amount of Southern charm, Ms. Payne’s new series is off to a strong start.

Returning to her childhood home in Heron Creek, for a couple of different reasons, Graciela “Gracie” Harper is angry, broken hearted and worried about the health of her rapidly aging grandfather.  Determined to “fake” it till it’s real, Graciela tries to put on a good front but doesn’t really fool anyone who really knows her.  Becoming a part time librarian, inheriting a ghost, and moving in with her grandfather were never part of Gracie’s “future” plans, but it’s all she’s got to work with and she’s determined to make it work.

Ms. Payne does a good job developing Gracie’s character; at first I wanted to slap her around for a while (she was a bit whinny), but I did manage to identify with her and watched her character grow.  One of the most endearing parts of her character was her love and devotion to her grandfather; like most children who have made the transition to becoming adults, she was faced with the inevitable truth of his aging and encroaching fragility.  She’s also forced to look at her past decisions in regards to her family and friends and has to decide how to mend relationships she’s hurt along the way.

The secondary characters are well developed and all added something to Gracie’s story and development; from her grandfather, a wonderful man who loves his family, to Beau Drayton, the new mayor in town determined to become Gracie’s boyfriend and caretaker.  I also enjoyed getting to know Gracie’s family members and friends and watch her try to repair the relationships.  The addition of the “ghost”, who has ties to past members of Gracie’s family and to Heron Creek, was interesting and well done.  The mystery takes some good twists and turns and is well paced.

Will Gracie solve the mystery of why she’s seeing a ghost and why the ghost is determined to help her correct something from the past?  Will Gracie become emotionally strong enough to open her heart and let other’s in? You’ll have to read Not Quite Dead to find out.  This is the first book I’ve read by this author and I hope we get to see more of Gracie, her family and friends, in another adventure.

FTC Disclosure: I received a complimentary copy of this book as a part of a book tour in exchange for a fair and honest review

Lyla Payne has been publishing New Adult romance novels for a little over a year, starting with Broken at Love and continuing with the rest of the Whitman University series. She loves telling stories, discovering the little reasons people fall in love, and uncovering hidden truths in the world around us - past and present. In her spare time she cuddles her two dogs, pretends to enjoy exercising so that she can eat as much Chipotle as she wants, and harbors a deep and abiding hope that Zac Efron likes older women. She loves reading, of course, along with movies, traveling, and Irish whiskey. Lyla's hard at work, ALWAYS, and hopes to bring you more Whitman University antics and at least one more Lowcountry ghost tale before the end of the year.

If you want to know more, please visit her at http://lylapayne.com

If you're a fan of Young Adult fiction--science fiction or otherwise--please check out her work that's published under the name Trisha Leigh. http://trishaleigh.com