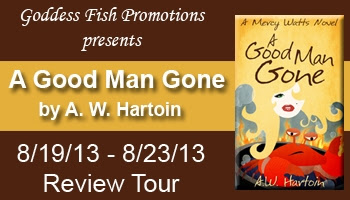 Join me in welcoming A.W. Hartoin on her review tour for A Good Man Gone.  Please leave a comment or question for A. W. to let her know you stopped by.  A.W. will be awarding a backlisk ebook at each stop, It Started with Whisper, to a randomly drawn commenter and a $30 GC to a randomly drawn commenter during the tour. You can follow her tour here. 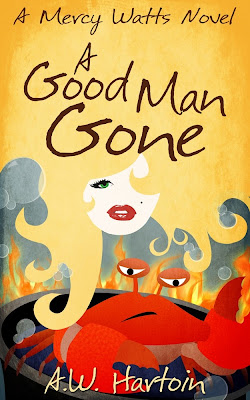 It’s summer in St. Louis and Mercy Watts is on vacation from her parents. The great detective and his nosy wife are on a cruise and Mercy thinks she’s off the hook for doing any investigating for them. But when a family friend has a fatal heart attack, Dad has one of his famous feelings and orders Mercy to look into it. Mercy tries not to get sucked in. She really does, but she’s her father’s daughter. Soon Gavin’s death leads to a more grisly one, the death of a bride on her wedding day. Can the two be connected? Was Gavin murdered? Now Mercy can’t stop. You do for family. That’s all there is to it.

Dr. Grace held Gavin’s body for two days and then called me down from orthopedics for a talk, as he put it. I arrived at ten in the morning, and the morgue was hopping. There were no less than five detectives, a police photographer, and a couple of beat cops standing around drinking coffee. One of the detectives was my cousin, Chuck Watts.

Chuck saw me and, before I could react, walked over with his patent self-assurance that that never failed to irritate me. He looked good as he always did. He once told me that only ten percent of the world’s population is attractive. He definitely considers himself in the top ten percent, maybe top five. I hated to admit it, but he was right. Chuck was a pleasure to view with his sinewy muscles, broad shoulders, and hooded blue eyes. Still, Chuck couldn’t be considered conventionally handsome. He had thinning hair and pockmarks on his cheeks, but those flaws added to his allure. Dad said it was lucky he had them or he would’ve gotten nowhere on the force. It doesn’t pay to be too good-looking in a job like Chuck’s.

“Hey, Mercy,” he said and gave me a hug that lasted a couple of seconds too long. No one else seemed to notice.

“Is that any way to greet your favorite cousin?”

“You’re not my favorite cousin. We’re not even blood-related.”

“Even better.” Chuck smiled the smile that melted the hearts of every single one of my friends, including my best friend Ellen. She took him to our prom. I haven’t quite forgiven her for that one. 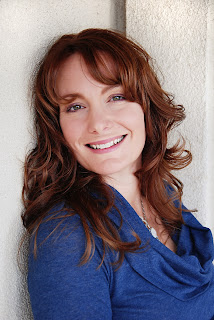 A.W. Hartoin is the author of the Mercy Watts mystery series and the Away From Whipplethorn fantasy series. She lives in Colorado with her husband, two children, and six bad chickens.

The first full length novel in the Mercy Watts series, A Good Man Gone by A.W. Hartoin is part cozy mystery and part comedy.  A sassy, smart heroine, likeable secondary characters, a good mystery and good dialogue kept me turning the pages to discover what was going to happen next.  Set in the city of St. Louis, very close to where I live, this is a book I can see myself reading over and over.

The only child of a retired cop turned private investigator; Mercy Watts is a part time nurse who just happens to look like Marilyn Monroe.  When a friend of the family dies while her parents are on vacation, Mercy finds herself pushed into investigating the cause of death because of her father’s “hunch”.  First incorrectly labeled a “myocardial infarction”, the cause of death turns out to be murder and Mercy soon finds herself hunting down clues and trying to solve the case before the cops, one who is her cousin by marriage, can mess it up.

Ms. Hartoin does an excellent job developing Mercy’s character; smart, gorgeous and sassy, Mercy is a character I easily identified with and couldn’t get enough of.  The author’s seamless writing style made it easy to quickly immerse myself in the world she created and I found it difficult to put the book down.  The mystery was top notch and not easily solved though there were plenty of clues.  The secondary characters were well developed and all contributed something to the plot and there’s even a touch of romance in the story.

Will Mercy solve the case before her parents get back from their cruise?  Just how are the two murders the police are investigating tied to Mercy’s case and will anything happen between Mercy and Chuck, her cousin by marriage?  You’ll have to read A Good Man Gone to find out.  I really enjoyed it and will be reading the short novellas set in Mercy’s world while I wait for the next full length book.

FTC Disclosure:  I received a complimentary copy of this book as a part of a book tour in exchange for a fair and honest review.  I did not receive any additional payment for my opinion of the reading material provided.