Virtual Book Tour for The Paris Lawyer by Sylvie Granotier 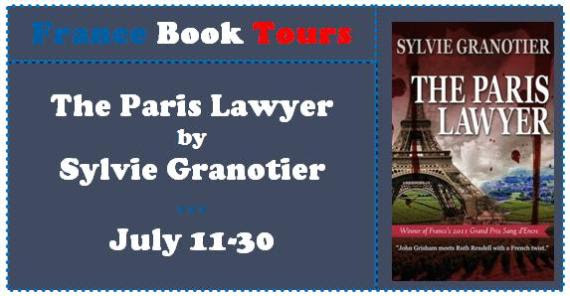 Welcome to my stop on the Virtual Book Tour for The Paris Lawyer by Sylvie Granotier.  Please leave a comment or question for Sylvia to let her know you stopped by.  You can follow the tour here.

The Paris Lawyer
By Sylvie Granotier
Translated by Anne Trager

As a child, she was the only witness to a heinous crime. Now, Catherine Monsigny is an ambitious rookie attorney in Paris, working for a well-known firm. On the side, she does pro bono work and hits the jackpot: a major felony case that could boost her career. A black woman is accused of poisoning her rich farmer husband in a peaceful village in central France, where nothing ever happens.

While preparing the case, Catherine’s own past comes back with a vengeance. This fast-paced story follows Catherine’s determined search for the truth in both her case and her own life. Who can she believe? And can you ever escape from your past? The story twists and turns, combining subtle psychological insight with detailed descriptions of the region.

Praise For The Paris Lawyer

“Sylvie Granotier’s The Paris Lawyer is a beautifully written and elegantly structured novel of a woman’s attempt to solve the central mystery of her life, along with several other mysteries along the way. It captures the reader from the first page, and never lets go.” — Thomas H. Cook, winner of the Martin Beck Award, Barry Award for Best Novel, Edgar Award for Best Novel.

Author, screenwriter and actress Sylvie Granotier loves to weave plots that send shivers up your spine. She was born in Algeria and grew up in Paris and Morocco. She studied literature and theater in Paris, then set off traveling —the United States, Brazil, Afghanistan, and elsewhere, ending with a tour of Europe.  She wound up in Paris again, an actress, with a job and some recognition. But she is a writer at heart, and started her publishing career translating Grace Paley’s short story collection Enormous Changes at the Last Minute into French.

Fourteen novels and many short stories later, Sylvie Granotier is a major crime fiction author in France. She has met with continued success, and is translated into German, Italian, Russian and Greek. The Paris Lawyer is her first novel to be translated into English. This legal procedural that doubles as a psychological thriller is full of plot twists that bring us into the heart of French countryside, La Creuse, a place full of nineteenth-century landscapes and dark secrets. Sylvie splits her time between Paris and the Creuse.

Both a double mystery and a coming of age tale, The Paris Lawyer by Sylvie Granotier is the intriguing tale of a young female lawyer as she begins her professional career.  Well developed characters, good dialogue, and two solid mysteries kept me turning the pages.  While not a rapidly paced book, Ms. Granotier’s does a good job describing both Paris and the French countryside where the action takes place.

Fresh from her first trial victory, defending a man accused of assault, attorney Catherine Monsigny, is thrilled to discover she’s being assigned to a high profile case.  Chosen to defend Myriam Villetreix, a woman accused of murdering her wealthy and older husband, Catherine looks forward to a case that can make or break her career.  With her boss’s approval, Catherine heads from Paris to Guéret, where the couple lived and the murder took place.  Planning to investigate her client’s case and prepare her defense, Catherine is not prepared to have to deal with her own personal issues at the same time.

Arriving in Guéret, Catherine soon realizes nothing is quite as it seems.  While Myriam Villetreix insists she’s innocent and has only been accused of murdering her husband because his cousins want her out of the way so they can claim the substantial inheritance, Catherine discovers Myriam is not exactly what she claims.  Meanwhile, Catherine also has to deal with her own emotional problems.  Being in Guéret brings back memories of her mother’s murder, which took place in a neighboring town when Catherine was only three.

Ms. Granotier does an excellent job developing her characters; it was easy to identify with the Catherine and her youthful ambitions.  At some point or another in our careers, we’ve all wanted to get noticed and promoted because of our work.  It’s also easy to identify with Catherine, the young daughter who was present at her mother’s murder but can’t remember anything of what took place.
Giving us the viewpoint of several different characters, this psychological thriller showcases the woman Catherine has become.  As she gets to know both Myriam and her mother, she begins to get the real picture of what took place with both women, which will eventually enable her to get some closure.  It also helps her understand her father, whose reluctance to dig into his wife’s case has always been about his daughter’s peace of mind.

Will Catherine be able to prove her client’s innocence?  Will she discover her mother’s killer’s identity?  You’ll have to read The Paris Lawyer to find out.  I enjoyed it and I think you will too.

FTC Disclosure:  I received a complimentary copy of this book from the publisher via NetGalley.  I received no additional compensation for my opinion of the reading material provided.