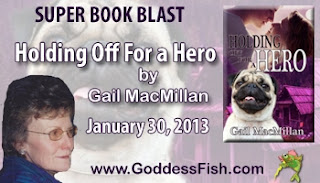 Welcome to my stop on Gail MacMillan's Super Book Blast for Holding Off For A Hero.  Please make sure to leave a comment or question below to let her know you stopped by.  Gail will award two $5 Amazon GCs and three digital copies of "Lady and the Beast" to randomly drawn commenters during the tour.  You can follow her tour stops here, the more often you comment, the better your odds of winning. 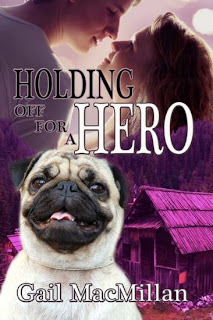 Holding Off For A Hero
by Gail MacMillan

Beautiful, vivacious Emma Prescott has a love-'em-and-leave-'em reputation. Fact is, Emma's holding off for a hero. When she moves to a cabin at wilderness Loon Lake and meets her one neighbor biology professor Frasier MacKenzie, he's still just another guy, even with his killer blue eyes and body that just won't quit...until he rescues her and her Pug from one danger after another. Then he definitely falls into hero territory. But the professor has no intention of filling the role of white knight in Emma's life. All he wants is to be rid of her and her annoying little dog so he can get on with his research. In fact, he's ordered to get rid of them whether he wants to or not. Looks like Emma may have to go on holding off for a hero...

The unmistakable screech made his breath clog in his throat. His body froze in midstride. The Panther! Dear God! Emma! Pulling his gun, he plunged into the darkening bush.

Her cry sent him charging forward. He rounded a small thicket to see her huddled against the trunk of a pine, the Pug clutched in her arms. Stalking toward her, bird-dog fashion, its belly dragging on the snow, was the Panther.

He raised the gun. His hand shuddered. No, please, God, not now! Taking aim, he fired. The report rocked the silence of the forest. The big cat screamed as the bullet whizzed inches over its head. Roaring, it whirled and vanished into the shadowy bush. The silence of the winter twilight returned. The hand holding the smoking gun dropped to his side, every ounce of strength drained.

“Thank God you missed.” Emma recovered her speech. “It would have been awful to have killed him.”

“Well, if he hadn’t run away from that warning shot, you would have got him with the next one, right?”

“Right.” Her absolute confidence made him choke out the word. Still clutching the Pug, she suddenly sank down on her haunches in the snow.

“Frasier, I was so scared,” she hiccupped. 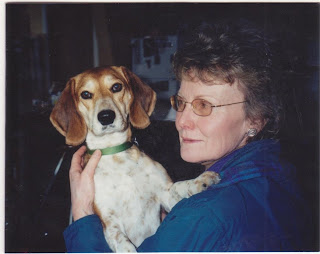 Gail MacMillan is a three-time Maxwell Award Winning writer and author of 26 published books. A graduate of Queen's University, she lives in New Brunswick Canada with her husband and two dogs, Fancy a Little River Duck Dog and Bruiser the cover guy and hero of Holding Off For a Hero.

Don't forget to leave a comment or question below to let her know you stopped by.  Gail will award two $5 Amazon GCs and three digital copies of "Lady and the Beast" to randomly drawn commenters during the tour.  You can follow her tour stops here, the more often you comment, the better your odds of winning.