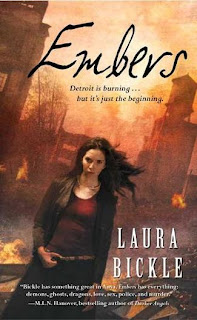 Unemployment, despair, anger--visible and invisible unrest feed the undercurrent of Detroit's unease. A city increasingly invaded by phantoms now faces a malevolent force that further stokes fear and chaos throughout the city.

Anya Kalinczyk spends her days as an arson investigator with the Detroit Fire Department, and her nights pursuing malicious spirits with a team of eccentric ghost hunters. Anya--who is the rarest type of psychic medium, a Lantern--suspects a supernatural arsonist is setting blazes to summon a fiery ancient entity that will leave the city in cinders. By Devil's Night, the spell will be complete, unless Anya--with the help of her salamander familiar and the paranormal investigating team --can stop it.

Anya's accustomed to danger and believes herself inured to loneliness and loss. But this time she's risking everything: her city, her soul, and a man who sees and accepts her for everything she is. Keeping all three safe will be the biggest challenge she's ever faced.

A woman with power she doesn't fully understand, a city on the brink of disaster and a ragtag assortment of paranormal investigators all play a part in Laura Bickle's Embers, the first book in her Anya Kalinczyk series.  A fan of paranormal novels for over 4 years, Ms. Bickle's story reminded me why I love this genre so much - the intricate world building with a flawed, strong heroine determined to rise above the challenge to save someone other than herself.  While the story moves a little slowly in the first few chapters;  the pace, action and mythology slowly take shape and race towards the end, with the characters taking me along for a wild roller coaster ride to the finish.

Detroit Arson investigator by day, paranormal investigator by night, Anya Kalinczyk's power as a "lantern" has always kept her separate.  Given a salamander (or Firedrake) named "Sparky" as a familiar by her mother, Anya has chosen only to pursue malignant, evil ghosts while leaving the benign and harmless ones alone.  When a series of fires erupts across the city, Anya finds her daytime job and her nighttime vocation crossing paths - it seems she's not the only "lantern" in town and the other one wants to sacrifice her city to awaken Sirrush, a sleeping dragon god.

As Anya investigates the new fires and tries to distance herself from the paranormal, she finds herself caught between two colliding worlds.  Ms. Bickle did an excellent job portraying Anya's current emotional state - she's used to being alone and it's difficult for her to trust others - while at the same time slowly giving us Anya's history so we could travel along on the road with her.  Anya's fear and sense of self guilt have always played a part in keeping her distant even from those who could help.

The secondary characters, from Anya's ghost hunting associates to her co-workers all play an important part in this book.  From Ciro, Katie and Brian, her ghost hunting associates who love her and are determined to help her grow both in her powers and a person, to Captain Marsh, her boss at work who values her input as an employee.  While there are two villains in this story, there's only one i wanted to see come to a violent end.  One of the villains, whose name I won't divulge because I don't want to give spoilers, is a sympathetic character who I felt truly sorry for at the end.

Will Anya be able to save Detroit from what's coming this Hell Night?  And will she finally be able to let her friends in?
You'll need to read Embers to find out.  Ms. Bickle did an excellent job creating a unique world with unique mythology and I can't wait to visit it again.  I'm really looking forward to reading Sparks next.

FTC Disclosure:  I received a complimentary copy of this book as a part of a book tour in exchange for a fair and honest review.
Posted by Maria at Monday, January 28, 2013