Today I am featuring The Reluctant Marquess on it's Virtual Blog Tour.  The author, Maggie Andersen, will be awarding two $10 Amazon Gift Cards to two random commenters during the tour so please make sure to leave a comment. 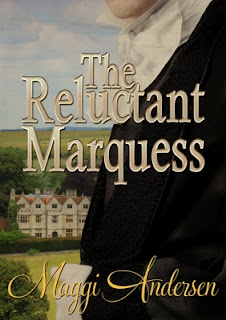 The rakish Lord Robert wishes only to tuck her away in the country once an heir is produced.

And here is an excerpt:

“I see we understand each other perfectly. So … do you agree?”

What was wrong with this man? Slowly, Charity released a heavy sigh. She could barely contemplate such a thing as this, and yet he acted as though he’d solved all the problems of the world with fashion accessories.

She had hoped for a small stipend, but marriage! And to a complete stranger. She couldn’t!
Not for all the gowns and hats on earth. She straightened up in her chair and lifted her chin. Her words were clipped and precise, and she hoped beyond hope he would accept her decision gracefully. “I say no, Lord St Malin.”

“How disappointing,” he said quietly.

She gulped as his heavy-lidded eyes continued to study her from head to foot. She was uncomfortably aware that the mist had sent her hair into a riot of untidy curls, and she smoothed it away from her face with both hands as she glanced around the room. She tucked a muddy shoe out of sight beneath her gown and then forced herself to meet his gaze. Might he like anything of what he saw? Her father loved that she had inherited her mother’s tiny waist, and she thought her hands pretty. His lordship’s gaze strayed to her breasts and remained there rather long. She sucked in a breath as her heart beat faster. When their eyes met did she detect a gleam of approval? It only made her more nervous.

I also had the oppportunity to ask the author some questions for a mini interview:

Me:  Which of the three different time periods you write historical romance in is truly your favorite or the one you think you would be most comfortable living in yourself?

Maggie:  I enjoy writing in the Georgian, Regency and Victorian eras, but it would have to be the Regency era. The Regency was quite special. With the influence of the aesthete, the Prince of Wales, it was an elegant Society, with a capital ‘S’, with beautiful clothes and houses. The ton prided themselves on their manners, customs and conversation. But only if I was a member of the gentry or upper ten thousand, because I doubt the lower classes enjoyed it so much.

Me:  Why do you think "The Rake" is such a popular type of character in historical romance even now when women are so independent?

Maggie: This is a difficult question to answer. For some of us it might be a primitive response to an alpha male. Some would be intrigued by a rogue and like the challenge to try and tame him. Others might just enjoy a charmer who knows how to make a woman feel special. Rakes are so often tamed in books though, that I suspect it’s the former. They were also rich, titled and powerful. Even an independent woman would find that enticing, I suspect.

Me: Now that you've written a dozen or so historical romances, how much research do you continue to do? Is there a favorite reference book you find yourself using more than others?

Maggie: I have many research books and each story requires more study. I collect them, and have quite a library. It’s a hobby of mine. The Prince of Pleasure and his Regency by J.B. Priestley is very good.

Me: Who is your favorite historical writer? Greatest influences in the genre?

Maggie: I don’t find it very difficult. I still have the same concerns; characterization, structure, plot, and a certain amount of research, because my books are seldom set in Australia.

Me: Is there a genre you haven't tried but want to?

Maggie: I plan to write a historical young adult when I get time.

Me: When you are writing, do you write in total silence or have music/television in the background?

Maggie: The television is generally on the news, or I’ll put on music tailored to the scene I’m writing. It might be contemporary with a good beat if I need more energy in the scene, or classical music for a romantic tryst.

Me: Can you tell us what we can expect from you next?

Maggie: I’m writing THE SPIES OF MAYFAIR which is a new series. A BARON IN HER BED is Book One. That’s released on September 6th. The other two books will be out next year. And THE FOLLY AT FALCONBRIDGE HALL, a Victorian romantic suspense novel is released on December 6th.


Me: If you were able to have dinner with 5 famous people (living or deceased), who would you want to have at the table?

Maggie: Oscar Wilde, because he was so witty and entertaining; Marilyn Monroe because she was a mesmerizing beauty and possibly smarter than she acted; Johnny Depp because he’s handsome and quixotic, and finally Jon Hamm, because I enjoyed him so much in Mad Men.

Maggi Andersen is an Australian author. She lives in the beautiful Southern Highlands of New South Wales with her lawyer husband, their cat and the demanding wildlife. Maggi has two degrees, a BA in English and an MA in Creative Writing. Georgette Heyer, Victoria Holt and Mary Stewart were strong influences on her writing. She began her career when her children left the nest and writes in a variety of genres. Her historical romances are set in the Georgian, Regency and Victorian era.

Maggi will be giving away a $10 Amazon GC to two randomly drawn commenters during the tour. So don't forget to leave a comment below.  You can follow the rest of Maggie's tour here.