Join Christina Freeburn on her Virtual Book Tour for Designed to Death, A Faith Hunter Scrap This Mystery.  Please leave a comment or question for Christina to let her know you stopped by.  Christina will be giving away one (1) copy of Designed to Death from this stop on her tour, winner’s choice of format (Kindle, Nook or print).  Please make sure to leave your email address with your comment.

Today, I’m going to share one of my favorite scenes from Designed to Death. This scene was the first image that popped into my head when I plotted the book out.

I watched in rapt fascination as Darlene’s complexion changed from alabaster white to cherry red. The magazine fell to the floor. I looked down. Belinda’s smiling face stared up at me. It was a great photograph of Belinda and I felt a smidge of jealousy that I didn’t photograph as well.

Releasing a screech that shook the building and rattled the windows, Darlene ran straight for Belinda, arms outstretched and hands moving like a claw machine going for a prize. Open and close. Open and close.

From the corner of my eye, I saw Karen come to life.  “Faith, stop her!” Hope’s cry galvanized me into action.


Darlene made an amazing leap. Tin sheets and the front row students scattered as her body grazed over the tabletop heading for her cousin. Red painted claw-like nails aimed for Belinda’s throat.

I weaved through the class attendees who were scuttling backwards, away from the wrestling match about to go down. I shouldn’t have turned down Officer Conroy Jasper’s offer of volunteer security guard. At the time, my main concern was Conroy trying to pick up a hot girl or two at the event, not a reenactment of a battle scene from a Twilight movie.

Hazel answered Darlene’s battle cry with one of her own. The shrieks shook the rafters. Hazel tossed the instruction sheets and went for the hot glue gun.  Women paused and focused on the brawl. Apparently, they just realized the great gossip potential of a good catfight. Who wanted safety when the best scandal to hit the town in months was being displayed right in front of their very eyes? A few moved forward, clutching their cell phones and holding them out at arm’s length.

Wrapping my arms around Darlene’s waist, I tugged. She reached back with one hand and clawed at my face.

“It’s mine! She stole it!” Darlene lashed out with her legs. One hand tightened on Belinda’s handmade t-shirt. “It’s mine!”

“Let go of my daughter!” Hazel squeezed the trigger of the glue gun. Hot liquid glue dribbled from the nozzle and splattered on Darlene’s hand.

Darlene snarled and hissed in pain but kept hold of Belinda. I tightened my grip on the raging scrapbooker and pulled. A cloud of blue, yellow and green dust attacked our eyes. Hazel wielded the glue gun in one hand and a plastic jar of glitter in the other.

Was she trying to brand us?

Darlene twisted and turned her hips, killer heels jabbed into my legs. I hung on for Belinda’s dear life.


Rip. I cringed. Underneath us, paper crinkled. Profits destroyed. I wanted to plead for help but was afraid my grandmother Cheryl would jump into the mix. I just needed to restrain Darlene for a little longer. Grandma Hope was probably on the phone right now arranging for either Steve or Ted, the detective who I tried to get along with for the sake of staying on his good side, to come as my back up.

As the specks of color continued to rain down on us, Darlene twisted her head and started blowing in Hazel’s direction while continuing to kick at me.

The color bombardment stopped. The container clattered to the floor. Though, unfortunately for me, Darlene persisted in attacking me with her heels.

Where in the world was Steve—or Ted—when I really needed their help?

Darlene’s grip relaxed. I yanked her from the table and we both splattered to the linoleum floor with Darlene on top of me. Darlene grabbed a plastic pot as we fell, whipped off the top and heaved it at Hazel and Belinda. Both covered their heads and screeched as the color figments coated them.

“That’s it! I’ve had enough of you.” Belinda screeched and kicked off her kitten heels. Things were about to get real ugly now.

The Faith Hunter Scrap This Mystery series brings together Christina Freeburn’s love of mysteries, scrapbooking, and West Virginia. When not writing or reading, she can be found in her scrapbook room or at a crop. Alas, none of the real-life crops have had a sexy male prosecutor or a handsome police officer attending.

Christina served in the JAG Corps of the US Army and also worked as a paralegal, librarian, and church secretary. She lives in West Virginia with her husband, children, a dog, and a rarely seen cat except by those who are afraid or allergic to felines. www.christinafreeburn.com www.theselfrescueprincess.wordpress.com 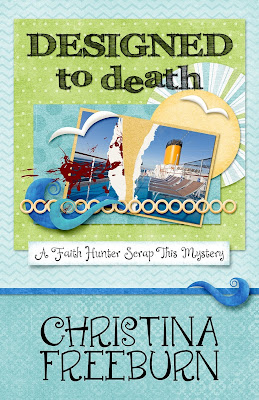 Designed to Death
By Christina Freeburn
A Faith Hunter Scrap This Mystery, Book 2

Faith Hunter planned the perfect event at her grandmother’s shop, Scrap This, featuring local scrapbooker and Life Artist Diva, Belinda Watson. But the extravaganza goes up in a cloud glitter when Belinda and her cousin, Darlene, brawl over scraplifted designs. Faith attempts to break it up, but only makes things worse. Then when Belinda turns up dead behind the Scrap This store, Faith’s involvement goes viral.

As accusations against her turn vicious, Faith sets out to prove her nemesis, Darlene, committed the crime, only to realize they are both innocent. Now they must team up or the murderer’s plan will come together seamlessly with the frenemies sharing a jail cell—or worse, a funeral. 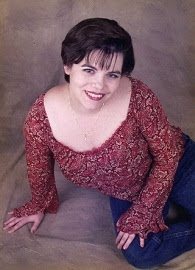 The Faith Hunter Scrap This Mystery series brings together Christina Freeburn’s love of mysteries, scrapbooking, and West Virginia. When not writing or reading, she can be found in her scrapbook room or at a crop. Alas, none of the real-life crops have had a sexy male prosecutor or a handsome police officer attending.

Christina served in the JAG Corps of the US Army and also worked as a paralegal, librarian, and church secretary. She lives in West Virginia with her husband, children, a dog, and a rarely seen cat except by those who are afraid or allergic to felines.

A fan of cozy mysteries and a person who’s done the occasional paper craft, I found myself quickly absorbed in Christina Freeburn’s Designed to Death.  Likeable characters, good dialogue, a good mystery and plenty of action, kept me turning the pages to discover what was going to happen to Faith Hunter, Ms. Freeburn’s primary character.  If you’ve ever been to any kind of crafting event, or live in a small town, you’ll definitely recognize many of the types of characters who make appearances in this book.

Still trying to keep a low profile, Faith Hunter continues to work in “Scrap This”, her family’s craft store.  Given the job of “Event Coordinator”, Faith manages to convince “Making Legacies” magazine, and Belinda Watson, their newly crowned Life Artist Diva and a local resident, to host a craft event at the store.  Only Faith never planned on a brawl breaking out between Belinda and her cousin in front of all the customers, accusations being shouted back and forth about stolen craft designs, or on finding Belinda’s dead body behind the store later that night.

Finding herself once again involved in a murder investigation, and caught between two very different men who seem to want her, Faith has to prove she’s innocent and save “Scrap This” from getting a bad reputation.  Ms. Freeburn does a good job developing Faith’s character; I liked her, and her mental conversations with herself right from the start.  While her family really doesn’t know why Faith left the Army and came home (she’s keeping some pretty big secrets) they are a big source of support for her and provide a good amount of humor in the story.  I especially liked her grandmothers.

The mystery in the story is very well written and takes several unexpected twists and turns.  It took a while for me to piece the clues together and I had to think about who I thought the murderer was.  Ms. Freeburn also does a good job developing the beginnings of a romance for Faith.  While her grandmothers have chosen Steve, the town’s prosecutor and a close neighbor, for Faith, the town’s homicide detective, Ted (the only person who knows Faith’s biggest secret) tries to keep Faith out of trouble because he cares for her too.

Will Faith discover who killed Belinda before she ends up as one of the prime suspects?  Will Faith be able to guard her secrets while trying to uncover a murderer?  You’ll have to read Designed to Death to find out.  I enjoyed it and if you like a good mystery I think you will too.  While this is the second book in the series, I was able to read it on its own.  I do plan to read Cropped to Death to read about Faith solving her first mystery, and I’m hoping I get some answers about Faith’s secrets too.

Don't forget to leave a comment or question for Christina to let her know you stopped by.  Christina will be giving away one (1) copy of Designed to Death from this stop on her tour, winner’s choice of format (Kindle, Nook or print).  Please make sure to leave your email address with your comment.
Posted by Maria at Tuesday, September 17, 2013