Susan Mallery Speaks to Librarians about the Appeal of Romance
New York Times bestselling author Susan Mallery was asked to speak this summer at the American Library Association national conference in Anaheim, California, on a panel called “Isn’t It Romantic?” Mallery’s latest book, SUMMER NIGHTS (Fool’s Gold book 8) is dedicated to librarians who have done so much to introduce readers to her books. This is the speech she prepared. 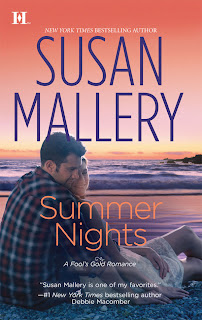 The appeal in romance is that our books offer readers a celebration of community. Romances are all about connecting. Sure the boy-meets-girl part is fun and exciting, but often what really brings a reader back again and again are the connections made within the novel.

Most romances happen in a larger context of relationships. Families and friends play an important role. We want to experience falling in love with a hunky guy, but we also want a sense of belonging. The most popular books feature a cast of usually like able, sometimes annoying, generally realistic characters who are amazingly like people we know. Or people we get on an emotional level.

These other characters, sometimes seemingly unimportant, can be the glue that holds our books together. Our hero and heroine are revealed through their relationships with secondary characters. The gruff solitary man who unexpectedly cares for a wounded puppy wins our heart forever. The exhausted single mother staying up until midnight to frost cupcakes for her son's first grade class reminds us of ourselves. While the romance is central to the story and the reason we think we read "those kind of books" I believe the real truth is we love the sense of community a romance brings to the table. The sexy guy on the cover draws us in, but the heroine's relationship with her sarcastic best friend turns out to be just as satisfying and meaningful. 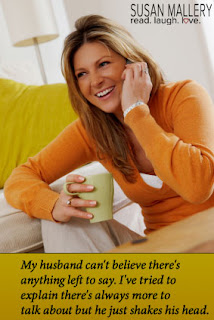 The majority of romance readers are women. Women are usually the keepers of relationships in their lives and the lives of those around them. We are the ones who maintain the friendships, remember birthdays, make sure each of our children has a moment to feel special. We can spend a weekend with our girlfriends and when we get home, still think of something we could have told them. When I travel to a writers’ conference and hang out with my writer friends for days, then return home and get a call from one of them, my husband can't believe there's anything left to say. I've tried to explain there's always more to talk about but he just shakes his head.

In our lives we want friends and family. We want connection. Romances offer that in our fiction. We can meet women we want to have lunch with and men we want to fall in love with. Romance isn't man against nature or man against himself. It's man and woman falling in love in a much bigger context. One or both of them have a family, there are friends, coworkers, pets. It's a real world populated by the funny and the strange and if done well, it's a world we want to return to again and again.

For years now, romances have been written in groups. Trilogies, sisters, brothers, a band of warriors. Sherrilyn Kenyon gives us her immortal warriors. Debbie Macomber gives us Cedar Cove. In between lie stories only limited by the imaginations of the writers who create them. It is the combination of the familiar and the unknown that draws us back.

I started writing in category romance. I wrote about 80 books for Silhouette. I wrote about sisters and cousins and brothers and even neighboring sheik kingdoms. The longer a series went on, the more readers responded. When I moved into writing single title, I continued with families. One day a very successful writer friend sat me down and said, "Write about a town. It's limitless." 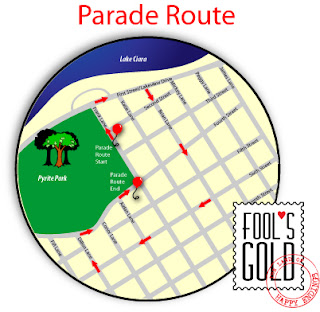 From that very intelligent advice, my Fool's Gold series was born. www.foolsgoldca.com It's a small town set in the foothills of the Sierra Nevada. I started with the idea of a town suffering a man shortage, which gave me the chance to put women in non-traditional jobs. I decided to write the books in trilogies, with the idea each trilogy would stand on its own, allowing readers to join at any point. By the second Fool's Gold trilogy I'd realized the man shortage wasn't that interesting, but the non-traditional jobs were, so modifications were made.

Reader response has been terrific. They love the town. Mayor Marsha, California's longest serving mayor, is a fan favorite. I keep track of previous heroes and heroines using a data base and often feature births in subsequent books. I use social media to increase the level of connection with my readers. We have the usual interactions, but there is another level on my Facebook page, www.facebook.com/susanmallery. Readers help me name characters, pick careers and suggest new businesses for the towns. When a former heroine is due to give birth, readers usually vote on the gender of the baby and offer name suggestions. Next year three new businesses will open in Fool's Gold and each one of them is the result of something a reader said to me.

A romance can take place nearly anywhere, in any time. We have smart ass heroines who rescue themselves, timid virgins and librarians who dance on bars in our books. Every romance writer has a specific vision for what she wants to write, but what we all have in common is connection. Sisters who are drawn together because of a dying parent. Vampires fighting enemies while protecting the women they love. Handsome dukes who marry the most unlikely of spinsters, drawn to her against all odds, in part because she takes care of her younger siblings.

In romances we find the relationships that matter most to us personally. Those who adore babies in books can be endless entertained by the antics of newborns. If you prefer sexy, sassy heroines, there are dozens of writers to give you exactly that. The appeal of romance is how the stories speak to us so personally. They show us women who are brave, who overcome odds, who always have a snappy comeback and in the end find not just love, but also a place to belong. Romances celebrate the very best of us, and that ideal state is often illustrated in the connections our characters make with each other.

Romances are a reading escape that also touches the heart. Romances affirm what is most important to each of us—the people we love, who love us back.

I want to Thank both Susan and her assistant Jenel for making this speech available to me and my followers.