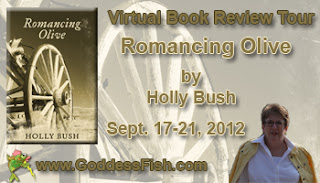 Hello and Welcome to my stop on the Virtual Book Review Tour for Romancing Olive by Holly Bush.  Please be sure to leave a comment or question below for Holly as she will be awarding a $25 Amazon Gift Card to one randomly drawn commenter during her tour.  The more often you comment, the better your odds of winning.  You can follow her tour here.

1891 . . . Spinster librarian, Olive Wilkins, is shocked to learn of her brother’s violent death at a saloon gaming table. Compelled to rescue and raise his children, Olive travels to Ohio, intending to return to her Philadelphia home with her niece and nephew. Little does she know that the children have come to love their caretaker, widower Jacob Butler. Will Olive return home without them or learn to love Jacob as well?

Olive touched her chin lightly and grimaced in pain. She looked up as the other woman stared at her kindly. Olive’s lip began to tremble and she gave in, away from all other eyes but this woman, to the fear still trapped in her throat. As she sobbed, Beth held her and rocked.

“The bruises will heal, Olive. You’ll be as good as new in a week.”

There was silence in the small cabin until Beth asked, “Just what, Olive?”

“I was terrified,” Olive said as she looked Beth in the eye. “Not for myself, but if he had taken or hurt Mary or Peg or Mark, I don’t know what I would have done. I’ve never been so afraid in my life,” Olive finished in a whisper.

Beth’s eyes softened. “Mother’s will do anything, anything for their children. Including laying down their life. I know. I have two children of my own.”

Olive lay back on the bed and stared at the ceiling. “Peg and Mark aren’t my children. Even Mary and John aren’t mine. But even still,” Olive ended quietly and turned to face Beth.

Beth tilted her head. “You’re more a mother than Mary and John ever had. And you can’t tell me that Peg and Luke haven’t warmed to you. I saw it at the picnic. I see it in their eyes today. They’re worried about you, they love you.”

Olive’s vision of Beth suddenly swam and her lip trembled, yet again. “Oh, God, Beth, how will I leave them. I love them, too. I never knew, never expected things to turn out the way they have.” 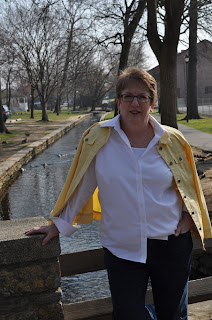 Holly Bush was born in western Pennsylvania to two avid readers. There was not a room in her home that did not hold a full bookcase. She worked in the hospitality industry, owning a restaurant for twenty years and recently worked as the sales and marketing director in the hospitality/tourism industry and is credited with building traffic to capacity for a local farm tour, bringing guests from twenty-two states, booked two years out.  Holly has been a marketing consultant to start-up businesses and has done public speaking on the subject.

Holly has been writing all of her life and is a voracious reader of a wide variety of fiction and non-fiction, particularly political and historical works. She has written four romance novels, all set in the U.S. West in the mid 1800’s. She frequently attends writing conferences, and has always been a member of a writer’s group.

Holly is a gardener, a news junkie, and vice-president of her local library board and loves to spend time near the ocean. She is the proud mother of two daughters and the wife of a man more than a few years her junior.

Heartwarming and sweet, Romancing Olive by Holly Bush is a romance I won't soon forget.  With well developed characters, charming dialogue and old fashioned romance, Ms. Bush captured my attention on the first page and never let go.  The world building, Ohio at the end of the 19th century, is well done and historically accurate.  The plot is well paced and there is more than enough action to keep the story flowing.

Olive Wilkins is a 35 year old "spinster" living alone in Philadelphia after the death of her parents.  When she is informed of her brother and sister in law's death in Ohio, Olive reluctantly accepts the idea of being responsible for her brother's children, his daughter Mary and his son John, and takes the train to Ohio, which she considers the wilderness, to bring the children back to Philadelphia to live with her.  She never planned on discovering unsavory details about her brother and his wife, or on falling for a widowed farmer with three children.

Jacob Butler has been a widower for over a year, raising three children on his own, he's just barely making ends meet with his ranch.  When his nearest neighbor, James Wilkins, and his wife are killed, and their children left on their own, Jacob moves their children into his home.  After all, what are two more mouths to feed when the older kids can help take care of the younger ones.  He never planned on an interfering female turning his world upside down or on discovering that his heart could learn to love again.

The scenes between Olive and Jacob are very well written; both proud people, their situation forces them into learning to lean on one another.  As Olive realizes who and what her brother really was, she's forced to realize the life she's been living is nothing more than a sheltered prison and she becomes determined to grab life by the horns and live it on her own terms - regardless of what society or her old friends might think.  I really liked how Ms. Bush developed Olive's character; when she first arrives in Ohio, she's wound tighter than a kite by society's expectations of behavior and thinks love, family and all of the good things in life have passed her by.  As she grows throughout the story, she realizes her true worth and decides she's worthy of loving others and being loved.

For his part, Jacob is forced to realize his pride has gotten in the way of what his children need.  The more time he spends with Olive the more attractive he finds her, regardless of the fact she's older than he is and more financially stable.  As his neighbors, and even his mother, encourage him to embrace what fate, or God, has put in his way.  Ms. Bush did a good job developing Jacob's character; while he's somewhat rough - he's not as well educated as Olive or as genteel- he's a gentle man who thought he'd only fall in love once in his life and has a hard time letting go of the past or of understanding his own emotions.

The secondary characters in this story are fantastic, from Olive's niece and nephew, Mary and John, who witnessed the horror of their mother's murder and have endured what no children should, to Jacob's children, Peg, Luke and Mark, who mourn the loss of their mother and the only softness they have ever known in life.  The townspeople, local sheriff and Olive's best friend Thea, round out the secondary characters who add so much color to this story.  While there is no "villain" per se in this story, there is an antagonist who is related to Mary and John, who doesn't make life easy for anyone and whose behavior at the end forces Olive and Jacob to unite to protect the children once and for all.

While this is an old fashioned romance, the language is mostly clean and what discussion there is of sex pertains only to married folk and is not descriptive in nature, there are some mature themes covered in the story;  in particular the theme of poverty, death during child birth in that time period and the evil nature of man.  It also addresses the theme of child labor in both a positive and negative light.  The story also touches on the lack of rights and independence women endured during this time.

Will Olive and Jacob realize the have a chance to grab a second chance at life and love?  Will they put aside their pride and form a new and joined family?  You'll have to read Romancing Olive to find out.  I assure you this is a romance worth reading and reading again.

My Rating:  5 out of 5 Crowns  and a Recommended Read!

FTC Notice: I received a copy of this book in exchange for a fair and impartial review.

Please don't forget to leave a comment or question below for Ms. Bush as she will be awarding a $25 Amazon GC to a random commenter during her tour.  You can follow her tour stops here.
Posted by Maria at Friday, September 21, 2012